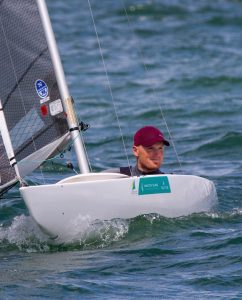 The silver medal wraps up a successful month of sailing for London 2012 Paralympian Matt Bugg, which included his first World Championship podium finish and Para World Sailing bronze and Sailing World Cup silver medal on Melbourne’s Port Philip in December as well as a sixth consecutive Australian championship title at the beginning of January.

Runner-up Bugg achieved good boat speed and, in general, sound tactical sailing against the world’s best 2.4mR class sailors, both disabled and able-bodied. However, finishing second to British sailor Megan Pascoe in the Worlds after a luckless regatta on the unseasonably fickle wind and waters of the Derwent in his home town, was not the end of his summer of sailing in Australia Matt Bugg had hoped for.

Early in the week, Bugg had dominated the 32-boat fleet in the Australian championship, also an open event, winning four of the seven races to collect his sixth consecutive national championship.

At the Nationals, two of the 14-strong Finnish team who shipped their boats in a container to Hobart, filled the minor placings, Janne Laine second and Jan Forsbom third. Megan Pascoe placed fourth, winning one race.

In the Worlds, Bugg, a member of the conducting club, the Royal Yacht Club of Tasmania, failed to win a race although several times holding a commanding lead going into the final leg.

At the end of the penultimate day of racing, with Pascoe winning both races,  and Bugg placing 3-2, the renowned English sailor born with celebral palsy,  was unbeatable.

Even if Matt Bugg went on to win the last two races and Pascoe finished last, she could discard these races and still finish well clear of Bugg.

Despite a collision involving Pascoe and a start signal misunderstanding by Bugg the two Paralympic class sailors finished eleventh and eighth respectively in the last race. Both Pascoe and Bugg chose to drop the final race results as their second discard from the 10 race series, leaving the British sailor with a net 13 points and the Tasmanian with a net 34 points and thus first and second in the Worlds.

“I’ve never before in front so many times in a regatta, only to get run over near the finish line,” Bugg said after yesterday’s racing. “I lost the last race to Megan by just seconds.

“The winds for these worlds championships have been light and flukey, only in the last race did we get a constant 10 knot breeze,” the Tasmanian sailor said.

“Now I’m looking for a great run of good fortune on the race track, including the Rio Paralympics,” added Bugg, who is expected to be named in the team for Rio over the coming months.