The Australian women’s goalball team has dropped out of the race to the Rio 2016 Paralympic Games after missing its last opportunity to qualify at the IBSA Goalball Asia Pacific Championships in Hangzhou, China overnight. 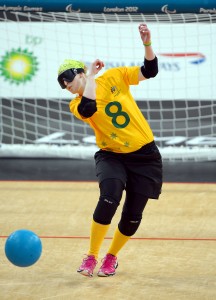 Aiming for gold at the Championships to secure the last Paralympic qualification spot available to the region, the Australian Belles were only strong enough to claim the bronze medal after they were outclassed by London 2012 silver medallists Japan and IBSA World Champions China.

The Australians fought their way through to the quarter finals but despite a spirited effort, showed they were no match for the Japanese side which converted a 3-1 half-time lead into a 9-1 victory.

While the eight-goal defeat signalled an early end to their Rio 2016 dreams, the Belles put in a fighting effort to claim the bronze medal against Thailand 6-2, an incredible effort given their circumstance said Australian assistant coach Robbie Vogt.

“While they’re obviously still processing the fact that Rio isn’t on the cards, it is to be noted how easy it would have been to pack it in and give up after their bruising from Japan.

“I’m very proud of how they’ve done that, particularly since only a few hours separated their final games,” he said.

Ending their Paralympic cycle on a higher note, the Australian Belle’s began their test against Thailand with Australian captain Meica Christensen, Tyan Taylor and Jenny Blow on court.  With scores even 1-all at half time thanks to a goal scored by Christensen, the team dominated in the second half to win 6-2. Christensen scored all six goals for the Australian team.

“The girls really fought hard in the second half. Their drive and enthusiasm shone through and each of the girls followed the process to end up with the result they deserved in that game,” Vogt said.

While the team will not be progressing through to next year’s Paralympic Games, the tournament bodes well for the success of the team in the future.

“The girls showed that progress has definitely been made in the past few years, and to play for bronze is a great achievement.

“Rio 2016 was obviously the main goal, but the girls are committed to the sport. We’ll be building the team for a better future and we’ll return to focus on Tokyo 2020,” Vogt said.