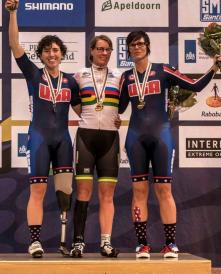 Australia’s fourth medal on the third day of competition came through reigning world champions Matt Formston and Pilot Mick Curran (NSW) who took silver in the men’s B Tandem pursuit.

“It was a victory for us before the final with both myself and Alistair getting through to the final,” said Gallagher, the 2008 and 2012 Paralympic pursuit champion.

“We had gone through the scenarios in our room about how good it would be if we both made the final, so it is great to be able to share this with him.”

In the afternoon qualifying session, reigning Australian champion Donohue posted a scorching time (4:33.405) in the the first of six heats.

The time was not bettered by any of the remaining ten riders, with Gallagher able to conserve energy as he cruised to the second fastest time of the day (4:39.789) to set up the all Aussie final.

In the final, Donohue got out to an early lead of just over a second after a few laps, before his more experienced rival and good friend Gallagher pegged back the lead to lead at the halfway mark by almost three seconds.

A superb final kilometre by Donohue made for a thrilling finish, however Gallagher was too strong, crossing the line in 4mins 40.411secs, just over a second ahead of his team mate (4:41.674).

“With Alistair going first in qualifying, he had to put out a great ride like that and it kind of worked in our favour that all the guys between us had to try to match his time,” said Gallagher.

“It made my job a lot easier, I was lucky that I knew what time I needed to ride and I was able to save some energy for the final.

“After a kilometre, I could see him in the bend so I could tell I was up, so I tried to just keep him at that distance, maintain that pace and it worked out well.”

The win was Gallagher’s seventh straight in the event, and tenth career track world title, with the Victorian revealing he enjoyed this more than he has in the past.

“There were a few years there that they weren’t ‘enjoyable’ as such, they were more of a relief,” Gallagher explained. “The level of competition now is so great, losing some races and the national title to Alistair, its not just expected (to win) for me now.  I can enjoy a result now more than I have in the past.”

“This is what you hope for and what you train for, but not what you expect,” said Powell. “It makes all the trainings and hard work worthwhile.”

The pair set up an enthralling final after less than one tenth of a second separated the pair in the afternoon’s qualifying where Powell took the bragging rights with the fastest time (4:07.191).

In the final, it appeared it would be a nail-biter with Powell leading by seven-hundredths of a second after one kilometre.  At the halfway mark, Powell extended the lead to half a second, before pulling away to lead by four seconds heading into the final kilometre.

Over the final few laps, Powell maintained her momentum, posting 4mins 08.127secs to record a comfortable win over Fisher (4:12.608).

“I went out a bit hard in qualifying and luckily I had enough in the tank to sprint it home to just sneak in to the gold-silver ride off.  It gave me a wake up call before the final to make sure I focused a little better,” said Powell.

“I went in to the final trying to not put too much pressure on myself, but I was fairly confident I could do the time if I had to, so we just focused on the control and taking it out in a solid pace.

“It was a good race, hard going out on the track, perhaps a a bit slower than we were used to in training, but your opponent has the same conditions.”

Powell, 47, was also pleased to see increased competitor numbers across the events at the Para-cycling World Championships

“The depth this year has been great, we have almost twice as many riders this year as last year. Everyone needs to lift their game now as it is really hard work now even just to qualify for the final.

“It is fantastic for the sport, to see so many new and young riders coming through. I am pretty stoked to keep as competitive as I am, particularly at my age against so many younger riders.

Formston/Curran were the second fastest qualifiers in the afternoon session (4:22.264) behind home-town favourites Stephen de Vries and Patrick Bos (4:20.976).

In the evening’s final, the Australian pairing were only one second behind De Vries/Bos after the first kilometre, before the Dutch duo slowly increased the margin with each kilometre before taking the gold with a time of 4mins 21.310secs head of Australia (4:26.332).