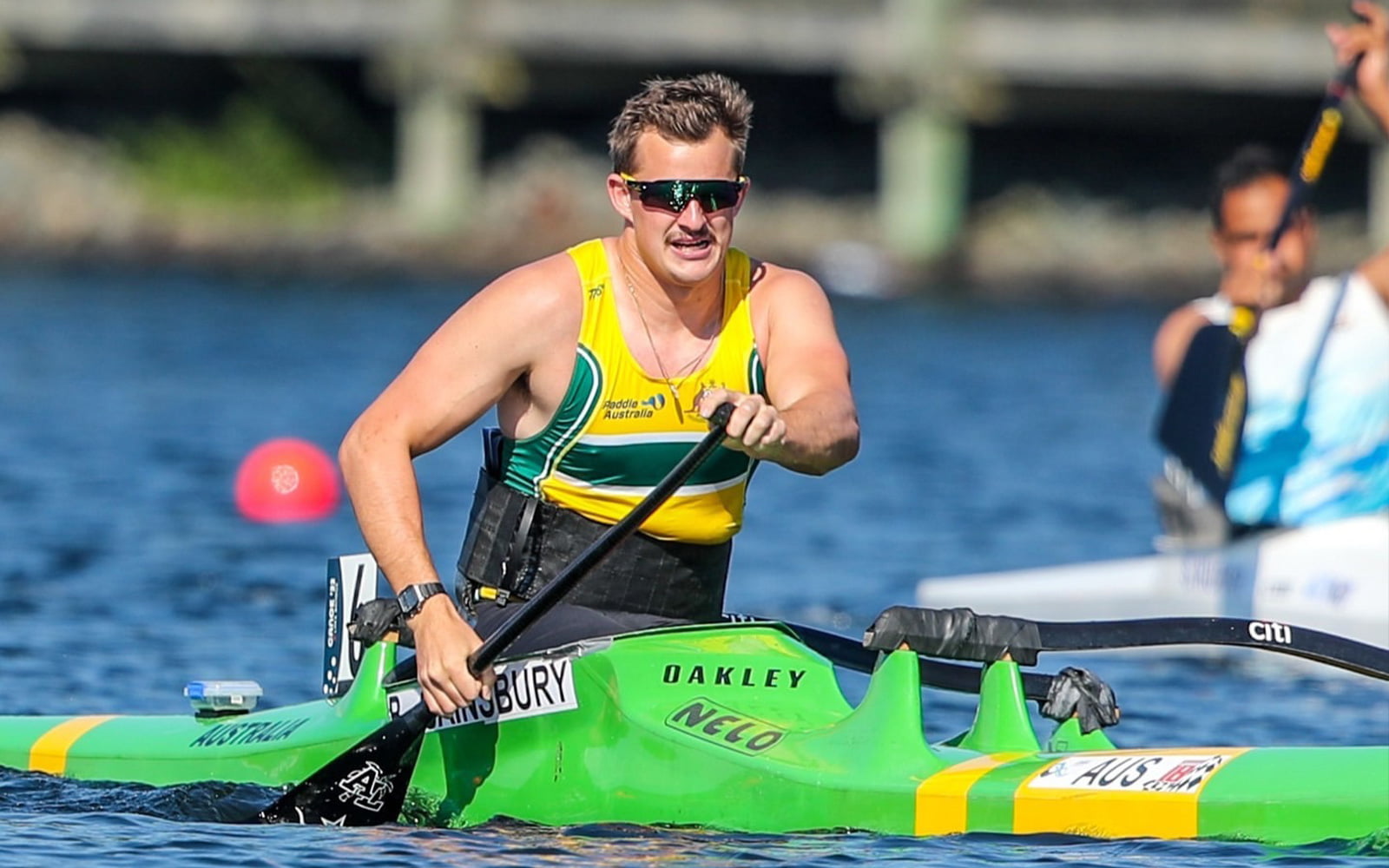 At the start gate for the VL1 200 final at the World Championships in Canada in August, Ben Sainsbury experienced an eerily familiar feeling.

Emotions were high after a pep-talk from coach Shaun Caven, in which Caven recalled how in 2019, two years after Sainsbury acquired paraplegia in a motocross accident, he could barely paddle 20 metres without capsizing.

“Look where we are,” the coach said. “Look what you’ve got through.”

Sainsbury thought back to his motocross days, which began when he was just four. Countless times he’d been behind a start line ready to give everything in the hope of becoming the best and representing Australia.

Now, in a different sport under different circumstances, his time had come.

“At the start gates I couldn’t help but think it was all quite familiar,” Sainsbury said. “I knew what it felt like and how to deal with the pressure. I knew what I had to do. ”

The 21-year-old from Karnup, south of Perth, burst out of the blocks and powered down the course, stunning his opponents to win.

“I was World Champion and I remember just looking up and taking a deep breath. I felt like I’d done something that made all the pain and struggles of what I’d gone through with my accident somehow worth it. I gave my family something to celebrate after everything they’d been through. Bad things happen, but sometimes maybe they’re not as bad as we think they are.”

GOLD 🥇 Para canoe rising star Ben Sainsbury has won gold in the men’s VL1 at the ICF Paracanoe World Championships in Canada overnight, competing at his first ever World Champs!

On Saturday, the World Champ will be at Paralympics Australia’s Para-canoe and Para-rowing Get Involved Day at AP Hinds Reserve in Bayswater, helping guide and encourage participants in the sport he’s come to love. He said he would never push someone into sport, but it’s given him so much and he wanted others to have the same opportunity.

“You might not want to become a Paralympian or World Champion, but just doing it for fun, making new friends, having a go at different sports – it breaks down so many boundaries,” he said.

“I didn’t want to give things a try for a long time. But then I did and look where it’s got me.”

Getting involved in Para-sport was a key element in Sainsbury’s recovery. He spent four months in hospital after his accident when he was 17. The injuries were so severe that, he said, paraplegia wasn’t the doctors’ biggest concern. He became heavily invested in his rehabilitation, which provided a distraction but stopped him from truly acknowledging what had happened.

Give the gift of sport this Christmas; help the next generation chase their sporting dreams. Donate now

“I’d trained my whole life to become a motocross rider and knowing I wasn’t going to ride again probably hit me more than being told I’d never walk again,” he said. “It goes to show what motocross meant to me. It was more than a sport, it was my way of life.”

Sainsbury completed Year 12 and a diploma of engineering. But he was an athlete at heart and wanted to experience physical competition again.

“I looked at some motorsport options but then I was given the opportunity to try wheelchair basketball,” he said. “I didn’t really want to do it because there was that stigma that, if you have an accident, you get into Para-sport because it’s an easy avenue and easy to do well.

“But with wheelchair basketball, I saw how much they were training and saw it was just as hard as an able-bodied sport at the top. That’s when I thought I wanted to be involved. It also made me realise there were people in a similar situation to me or worse. It put things in perspective.”

Sainsbury made the Australian U23s but, coming from motocross, he sought an individual sport. He tried Para-canoe and immediately felt at home.

“It sort of felt like an escape from my disability. To the naked eye you can’t tell the difference between me in a kayak and anyone else in a kayak. I really enjoy that. So all that together, it just felt like the right challenge. It’s a damn hard sport and it’s a bit more like motocross – I was behind that start gate again. I’ve got a massive passion for it now.”

He also has a massive passion for mental health and shares his experiences at schools and rehab units.

“I had my accident in 2017 and didn’t cry about it until 2019. I was on a basketball tour and the tiniest little thing broke me down. I was travelling around playing sport, things were going well, but it had all built up so much that I couldn’t handle it anymore and I had a breakdown.

“I was suffering depression, I’d shut my family out and became suicidal. I’d let everything build up but eventually it comes back and you have to deal with it.

“Once I spoke to the right people I was able to connect with my friends and family again and I finally came to terms with what had happened. I felt like I could move forward with life. Now it’s about taking the opportunities I have and making the most of them. That’s the best thing for my mental health.”

To stay the best in the world Sainsbury does three sessions a day, including gym cross-training. He described the Western Australian Institute of Sport program under Ramon Andersson as “next level” and feels fortunate to have strength and conditioning coaching, sport science, psychology and dietician support.

He may wonder what could have been in his motocross career, but those early days competing in country WA taught him well.

“It gave me a really good base,” he said. “It’s a sport where you need to have a lot of respect for your bike and it’s not a cheap sport, so you learn to respect what you’ve been given.

“My parents didn’t have to buy those bikes and take me everywhere so I could race. They did it because they love me. Dad always told me, ‘I’m taking you out to the track, so you give 100 percent and make the most of it’.

“I’ve taken those lessons into Para-sport. I have coaches offering me the best they can, giving me their time, so you have to give them the respect of doing everything you can to be the best you can be.”

Sainsbury’s remarkable maturity, mixed with his skill and passion for Para-canoe, places him well to become a star of the Australian Paralympic Team en route to the Games in 2024.

“It’s really good to be back in a high performance environment,” he said. “It feels normal again being an athlete. It’s in me, the drive’s there, so I want to use it.”