Six Australian sailors have been the given the chance to race for the final Paralympic medals on offer in their sport, before it is removed from the Paralympic Games following Rio 2016. 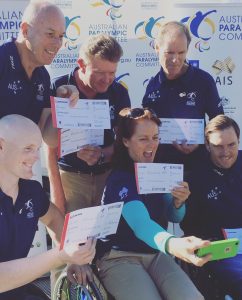 With sailing not included on the Paralympic schedule for Tokyo 2020, Rio will be a monumental Games for all six athletes.

Speaking at the announcement today, Anderson expressed that despite the disappointment of sailing’s exclusion beyond Rio, the 2016 Australian Paralympic Sailing Team will do their sport and their nation proud.

“The Australian Paralympic Sailing Team is world class across all three boat classes, and I have no doubt they will pushing hard to build on the success they have achieved in recent years,” said Anderson.

“The Australian Sonar Team is currently ranked number one in the world, Liesl and Dan in the SKUD 18 boat are the reigning Paralympic and world champions, and Matt is reaching his peak, having won silver at the International 2.4mR World Championships this year. We’re all excited to see how they progress in Rio.

“While we’re still devastated that there’s a chance it will be the last time these sailors will compete for Australia at a Paralympic Games, we know this team will use this as an opportunity to sail a great regatta and confirm their reputation as world leaders.”

Having captained the Australian women’s wheelchair basketball team to two silver medals and one bronze from five Paralympics from 1992 to 2008, London 2012 Paralympic gold medallist Liesl Tesch is relishing the opportunity to compete at her seventh Paralympic Games.

“Every single time you put on the green and gold at a Paralympic Games, it is like the first time. Getting the uniform out of the bag is part the symbolic journey on the way, and I can tell you, I will experience the same amount of joy now for my seventh Games as I did for my first,” Tesch said.

“I’m looking forward to defending gold at the Games, but I’m always aiming to sail a good regatta and be smart and do it well. Every race, and every training session is about doing the best we can.

“Rio is a really tricky course and we’ll be doing the best we can out there.”

Despite having been robbed in the Games’ host city last month, Tesch is also thrilled to be returning to Rio to compete.

“Rio is such a beautiful venue, to be able to compete there in a location like that is incredible.

“This is our last Paralympic Games, but for me competing is a way of life. It is about physical and mental wellbeing and feeling energised and alive, and I can’t wait to do that in what for now, is the final opportunity at a Paralympic Games.”

For Tesch’s sailing partner, London 2012 Paralympic champion Daniel Fitzgibbon, putting on the green and gold at Rio will be an opportunity to display his skills and a moment of reflection.

“I feel like an old hat at this now heading into my third Games. I’m surprised to have been around so long but I’m excited for the challenges that Rio will present for us,” he said.

“I’m very proud to be a Paralympian. The Paralympics is such a great movement and such a thing for people to aspire to and it really encourages young people with a disability. It can show them how much they can achieve.

“Rio will be truly special. I’ll be taking time while I’m there to reflect on my career and savour every moment of these Games.”

Australia has won four medals in sailing at the Paralympic Games – two gold, one silver and one bronze – since it was introduced as a Paralympic sport at the Sydney 2000 Games.

Paralympic sailing is open to all athletes who meet minimum physical requirements. Athletes compete in three non-gender specific events – single (2.4mR) and three person (Sonar) keelboats are open to most disability groups while the two person keelboat event is specifically designed for athletes with a more severe level of disability.

The Rio Paralympic Games will take place from 7-18th September, 2016.