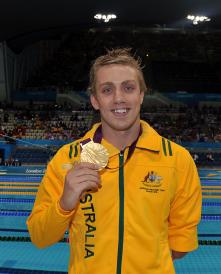 Australian Paralympic Committee President Glenn Tasker has congratulated Matthew Cowdrey on his record-breaking swimming career, after the three-time Paralympian announced his retirement from the sport today.

Cowdrey enters retirement as the most successful Australian Paralympian in history, having won a total of 23 Paralympic medals including 13 gold.

“It has been an absolute privilege to watch Matthew develop from the quiet 15-year-old kid who competed at his first Paralympics in 2004, into one of the greats of Australian Paralympic sport. He has become an outstanding ambassador for the Paralympic movement, a leader of the Paralympic swim team and our most successful athlete ever,” Mr Tasker said.

“Matthew’s commitment and determination could never be questioned, and his performances and success in the pool have been a contributing factor to the increase in profile for the Australian Paralympic movement over the past 10 years.

“I have no doubt that Matthew will go on to a successful career after swimming. He has created a lasting legacy among his team-mates and the wider Australian Paralympic movement and we wish him all the very best in his future endeavours.”

Cowdrey’s list of swimming accomplishments is staggering. In addition to his 23 Paralympic medals (13 gold, seven silver, three bronze), he won 21 medals at three world championships (16 gold, three silver, two bronze) and smashed dozens of world records after breaking his first one at just 13 years of age.

Born without his lower left arm, the 26-year-old from Adelaide currently holds five world records, five Paralympic records and nine short-course world records. After winning 15 medals as a teenager at his first two Paralympic Games in Athens and Beijing, his crowning achievement came at the London 2012 Paralympic Games. Adding another five Paralympic gold medals, two silver and one bronze to his career haul, he became the most successful Australian Paralympian of all time. He eclipsed track sprinter Tim Sullivan’s previous career gold medal record of 10 and the record of 19 total medals held by fellow swimmer Kingsley Bugarin.

“I have been fortunate to have achieved more than I could ever have dreamed of, and more than I set out to achieve, and more importantly I have enjoyed every minute of my time on the Australian swim team,” Cowdrey said.

“What has made the decision so much easier has been the strength I see within Swimming Australia, and the current swimmers’ leadership teams across the able-bodied and Paralympic squads. I leave Australian Swimming in a strong and promising position, and look forward to supporting from the sidelines through to 2016 and beyond.”