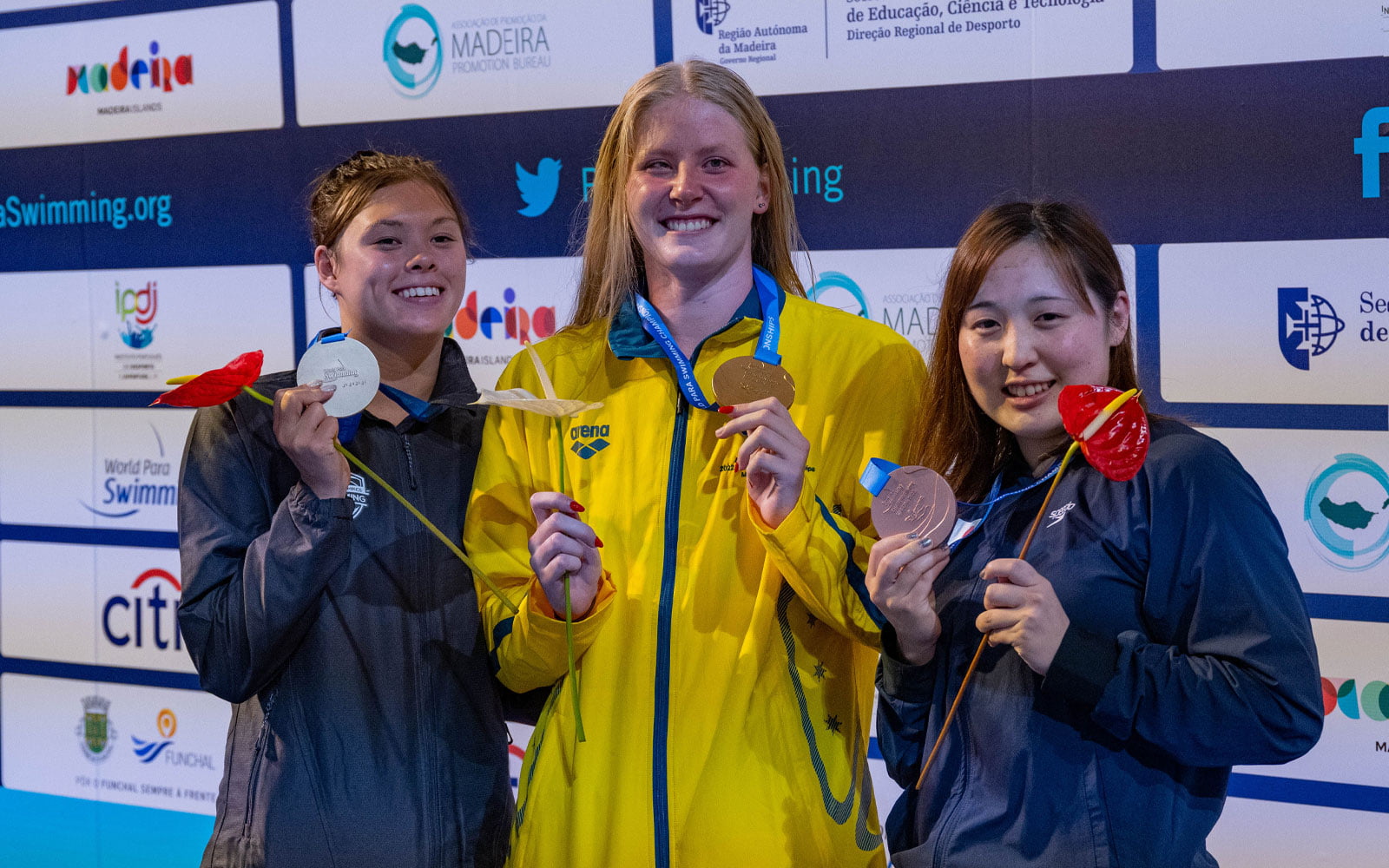 The things you remember about winning your first world championship.

For Katja Dedekind it’s that, after receiving her 50 metres freestyle S13 gold medal in Portugal last week, she sobbed in front of a global audience.

“I finished the race, did my interview, got changed, came back downstairs to the medal ceremony room and was totally fine,” she said.

“Behind the screen about to go out for the presentation, I was still fine. Then they played the anthem and I absolutely lost it! That just keeps replaying in my head, that I cried on international TV.”

Among Dedekind’s other memories was her luggage fail on the long trip home from Madeira, where she also won two silver medals, in the 400 metres freestyle and 100 metres backstroke.

“I always keep those sorts of things with me because I don’t want to put them in luggage, but I absolutely regretted putting my medals in my backpack because – this sounds really full of myself – it was so heavy on my back!” she said.

“We had to speed walk from the plane that landed in Dubai to the one that was leaving for Brisbane. We were sprinting across the terminal, got on a train to the next terminal and you could just see all these Australian athletes speed walking, some of them running because they’ve got shorter legs, and it was the funniest thing. My back was hurting because my backpack was so heavy.”

Dedekind wasn’t the only one feeling the weight of success. In fact, for the first time, all 20 competing swimmers won a medal, securing Australia seventh place on the medal tally.

Dedekind’s tears on the podium showed the joy she felt contributing to the team’s success, but also the triumph of becoming a world champion after bouts of illness and injury after Tokyo 2020. She also had to contend with changing coaches after moving from the Sunshine Coast to Brisbane so she could be near her family.

“The preparation wasn’t ideal,” she said. “But it obviously didn’t stop me in my adventure for success.”

That lust for success has increased now. Driving around with her mother, trying to stave off jet lag the day after returning home, Dedekind discussed how she had always been motivated to swim competitively and see how many Paralympic Games she could get to.

“But coming back from winning a gold medal and two silvers and getting two personal bests at a competition that I probably didn’t have the best preparation for, I’m so excited to see what the next couple of years hold.”

Starting with the Commonwealth Games in Birmingham next month.

“It’s not a benchmark event for the Para-athletes as it is for the Olympic athletes, but when do we really get to be on the same team as able bodied swimmers? It’s not something we often get to do.

“It’s exciting, it’s my first Comm Games and it’s the first time visually impaired athletes have been invited to compete.

“Being a world champion is awesome, but being a Commonwealth Games gold medalist, or even a medalist, is also something that’s recognised throughout the whole Commonwealth. So, although it’s not a benchmark event for me, it’s still a big international competition, where I’ll get to see people like Emma McKeon and others do their thing in person. It’ll be great.”