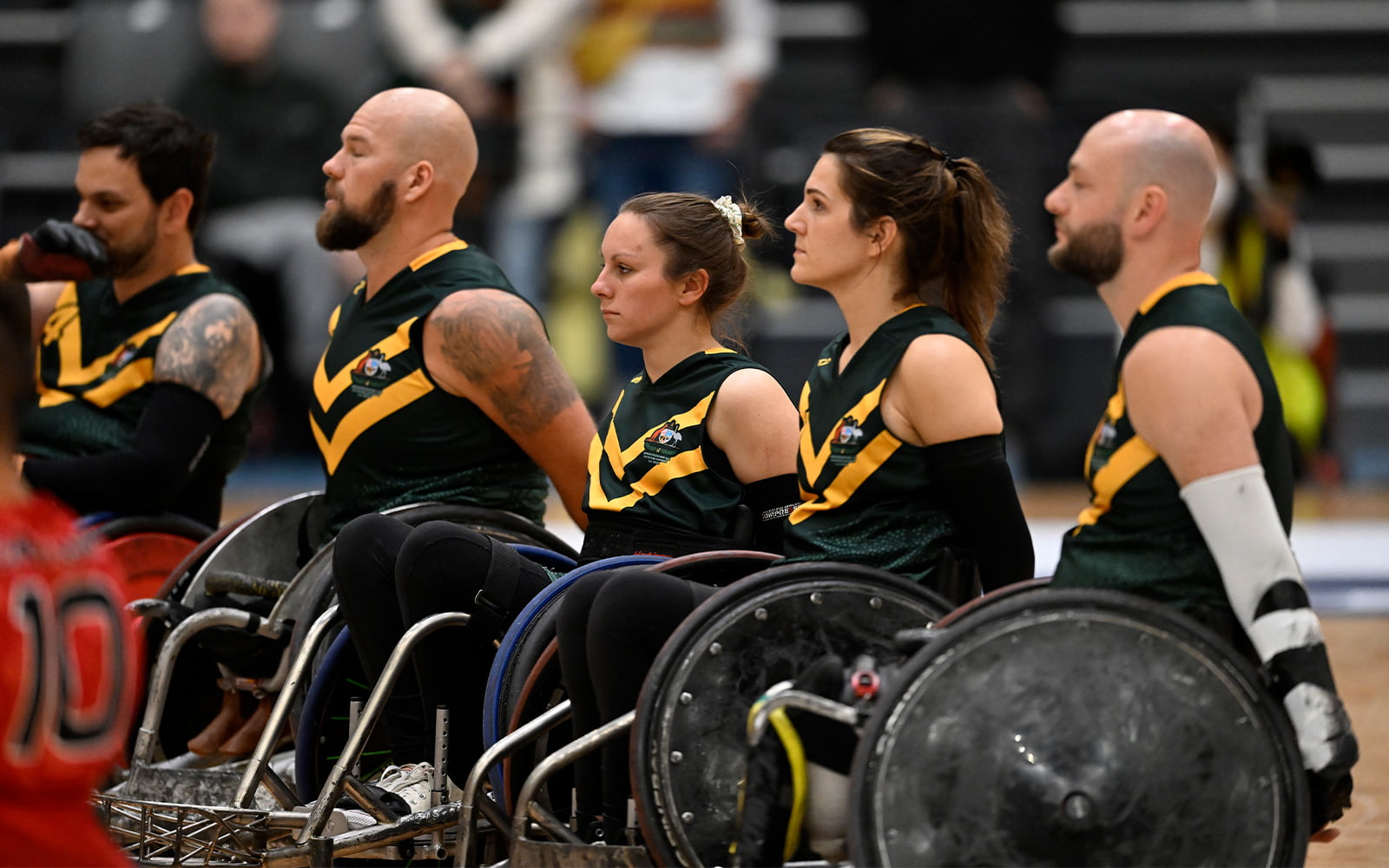 The Australian Steelers have sent an ominous message to their rivals at the 2022 World Wheelchair Rugby Championship with two commanding victories to open their campaign overnight.

After trouncing Brazil 57-36 to officially announce their arrival in Vejle, Denmark, the Steelers returned to the court less than five hours later and showed composure and toughness to prevail 55-53 against Canada in a brutal encounter.

Having labelled the Canadians ‘the most in-form team coming into this World Championship’, Australian head coach Brad Dubberley said he was impressed when the Steelers played a faultless first quarter to take a two-goal lead into the break which they never surrendered.

“That’s a very pleasing way to kick off a World Championship, that’s for sure,” Dubberley said.

“To beat a team like Brazil who are full of passion and energy and then to come away with a win against a team like Canada is awesome.

“We know it’s not all over and done with yet, though. We’ve still got big games ahead but that’s definitely set us up for the week ahead.”

The two-goal triumph over Canada ended a memorable day for the Steelers mentor, who had earlier celebrated a major career milestone against Brazil with his 200th victory as head coach of the Australian team.

Dubberley, who took on the head coach role in 2006 after a successful playing career with the Steelers, will mark a combined total of 450 international appearances as a player and coach later in the tournament.

“200 wins as head coach for our national team is a huge accomplishment,” Dubberley said.

“Obviously all the players I’ve coached over the years and the staff members I’ve worked with have provided me with a lot of help along the way to get me where I am, but it’s a milestone I am proud of.”

The match against Brazil also provided a career highlight for Chris Bond, who captained the Australian Steelers at a major tournament for the first time. It was clear the Queenslander relished the additional responsibility that comes with leadership on the big stage.

“For me, it’s an honour to lead this team. This is an extremely talented group and I think we can go far in this competition. It’s a big job ahead, but very happy so far,” Bond said.

“Two wins like those definitely give us confidence but we had confidence before we even played those two games.

“All of our training camps this year and our lead-up games have all been about making improvements and we hope to keep doing that over the next few games here.

“It wasn’t perfect, but it was clinical in areas. Some line-ups will need to go back and do our homework.

Some of the guys are hurting, they didn’t think they played that well and that’s probably true, but that’s good. It means they care about their performance and the team, so next game I reckon they’re going to come out and give everything they’ve got, and then by the finals, we’ll bring the whole package.”

The Steelers’ focus now turns to their next challenge, a blockbuster against the host nation. It will be a contest with plenty of feeling after Denmark caused the biggest boilover in their history by defeating the Australians in their epic opening match at last year’s Paralympic Games in Tokyo.

“This is a revenge game with a capital r,” the Australian captain said.

“We didn’t think they could upset us at the Paralympics last year and they did, so we are going to give them everything we can tomorrow because we definitely have a point to prove.”

Australia faces Denmark at 3am (AEDT) on Wednesday. The match will be streamed live via the 2022 Wheelchair Rugby World Championship website.