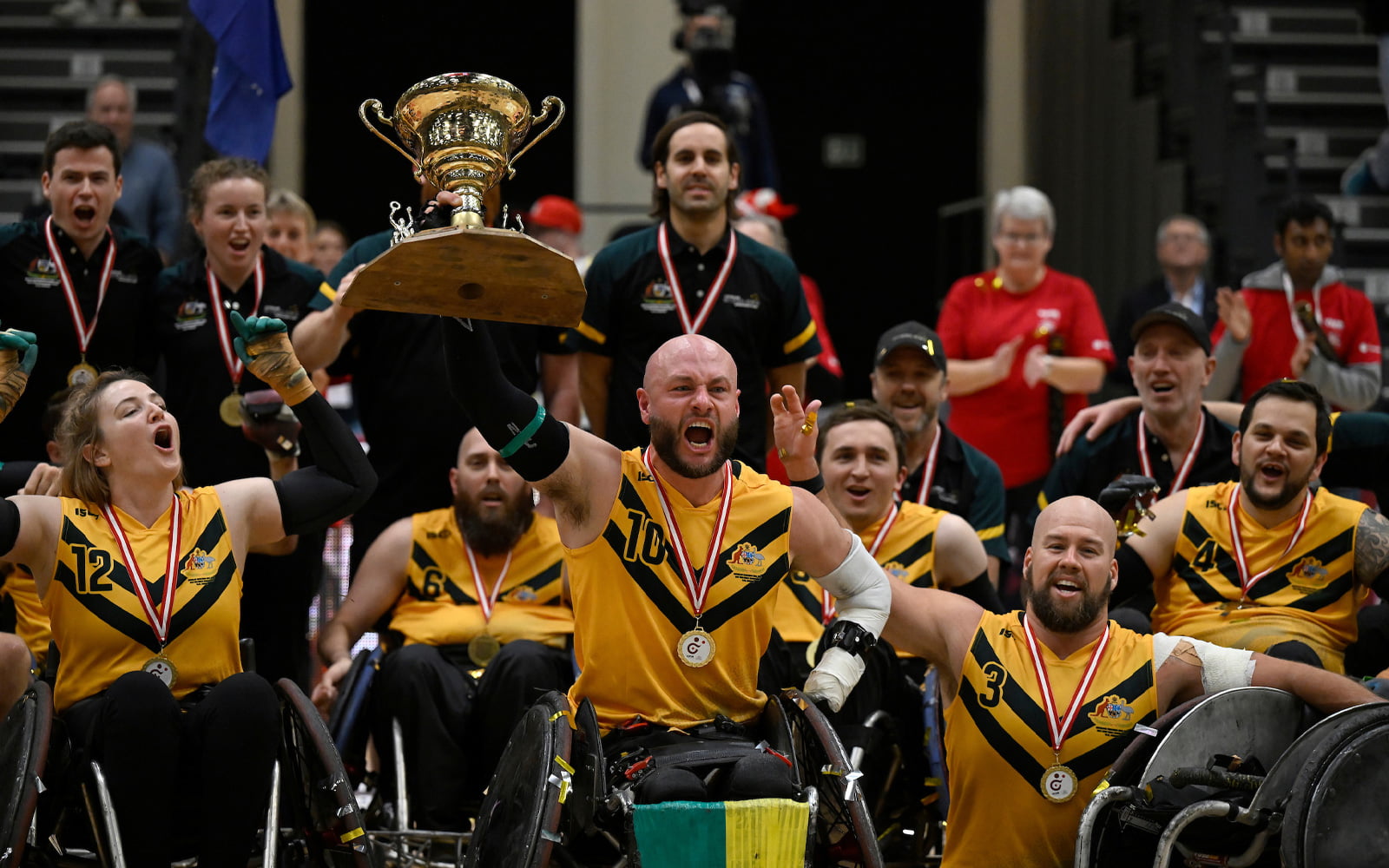 The Australian Steelers are the new world champions of wheelchair rugby.

The Steelers defeated the United States 58-55 in a classic world championship final to win the gold medal in Vejle, Denmark on Monday.

“We were written off three months ago and now we are the best wheelchair rugby team in the world,” said Australian captain Chris Bond.

“We never got a good lead but we just fought inch by inch. We held our nerve. Our bench players came in, got some turnovers. The US got some back from us which was a little bit sketchy but we knew we just had to hold on, grit our teeth and keep pushing.”

Help the next generation of Australian Paralympians chase their sporting dreams: donate today.

Leading the Steelers for the first time at a major championship, Bond’s captaincy was exceptional. His team-mates looked to him at key moments and he showed them the way.

“It was a war of attrition but it was testament to our training, our fitness and our staff. We put a really good plan together and we knew we could do it,” Bond said.

“We want to continue this momentum now, it feels so good. This is why we do what we do.”

The contest was fitting for a world championship final. Scores were level at quarter-time and half-time as both teams played brutal, mistake-free rugby and built pressure that became unbearable.

It was the United States who faltered first.

The Australians forced two critical turnovers in the third quarter and then scored both times to leave the Americans scrambling. They couldn’t recover.

“That was immensely satisfying. It’s been a hard slog for our whole team over the past couple of years,” Australian coach Brad Dubberley said.

“To have built this team and be successful in a tournament like this when so many teams could have won it, it is absolutely huge.

“The whole final went exactly the way we planned. The message from the get-go was to weather the US storm, we knew it was coming. We just had to keep it close.

“We gave up a minimal number of turnovers. Our key defence was phenomenal, we knew what key offence they wanted to run and I’m just super stoked that it all went to plan.

After winning their first world championship in Denmark in 2014, their new gold medal will help to ease the pain still felt by the Steelers after they lost the 2018 World Championship final by one-goal in Sydney, and after they missed a medal at last year’s Paralympic Games in Tokyo.

Ryley Batt, Australia’s most capped player at international level, said his overwhelming emotion at full-time was one of redemption.

“I’ve been a world champion before, but to be honest, this one feels more like a fairytale. Losing on home soil in 2018 really hurt. It really, really hurt. But to come back to win this world championship is a testament to our character.”

Batt had extra reason to celebrate when World Wheelchair Rugby, the governing body of the sport, named him as Most Valuable Player for the World Championship. He was also the leading scorer, crossing the line 231 times for Australia.

“The siren sounded, I was just looking around with tears in my eyes. I was asking myself if it was a dream and if that just happened,” Batt said.

“Everyone wrote us off, probably myself included. The World Championship was our ultimate goal but was it achievable? We didn’t know. But when we got to our training camp in Varese in Italy, things just started to work. We could feel it.”

For Australian head coach Brad Dubberley, the victory enhanced his coaching record that will go down in history among the very best.

Since he took the head coach role in 2006, the Steelers have contested every World Championship and Paralympic Games gold medal match with the exception of last year’s final at the Tokyo Paralympic Games.

Now a two-time World Championship winning coach, adding to his two Paralympic titles from 2012 and 2016, Dubberley said that while he would enjoy his latest success, he was already plotting Australia’s future dominance of the sport.

“Paris 2024 will be here before you know it. Paralympic Games and World Championships always come around very fast and we just need to continue our rebuilding,” Dubberley said.

“It’s exciting times for wheelchair rugby in Australia. Obviously Paris 2024 is our next priority but we’re also looking towards LA and our home Paralympic Games in 2032.

“We had members of our development squad here observing this tournament and now we want to go home and keep working with them to develop our talent and make ourselves even stronger from here.”

In the bronze medal match, Japan defeated Denmark 61-57. The 2018 world champions exploded in the first quarter to race to a four-goal lead and were never threatened, denying the host nation their first medal at a major championship in front of their home crowd.