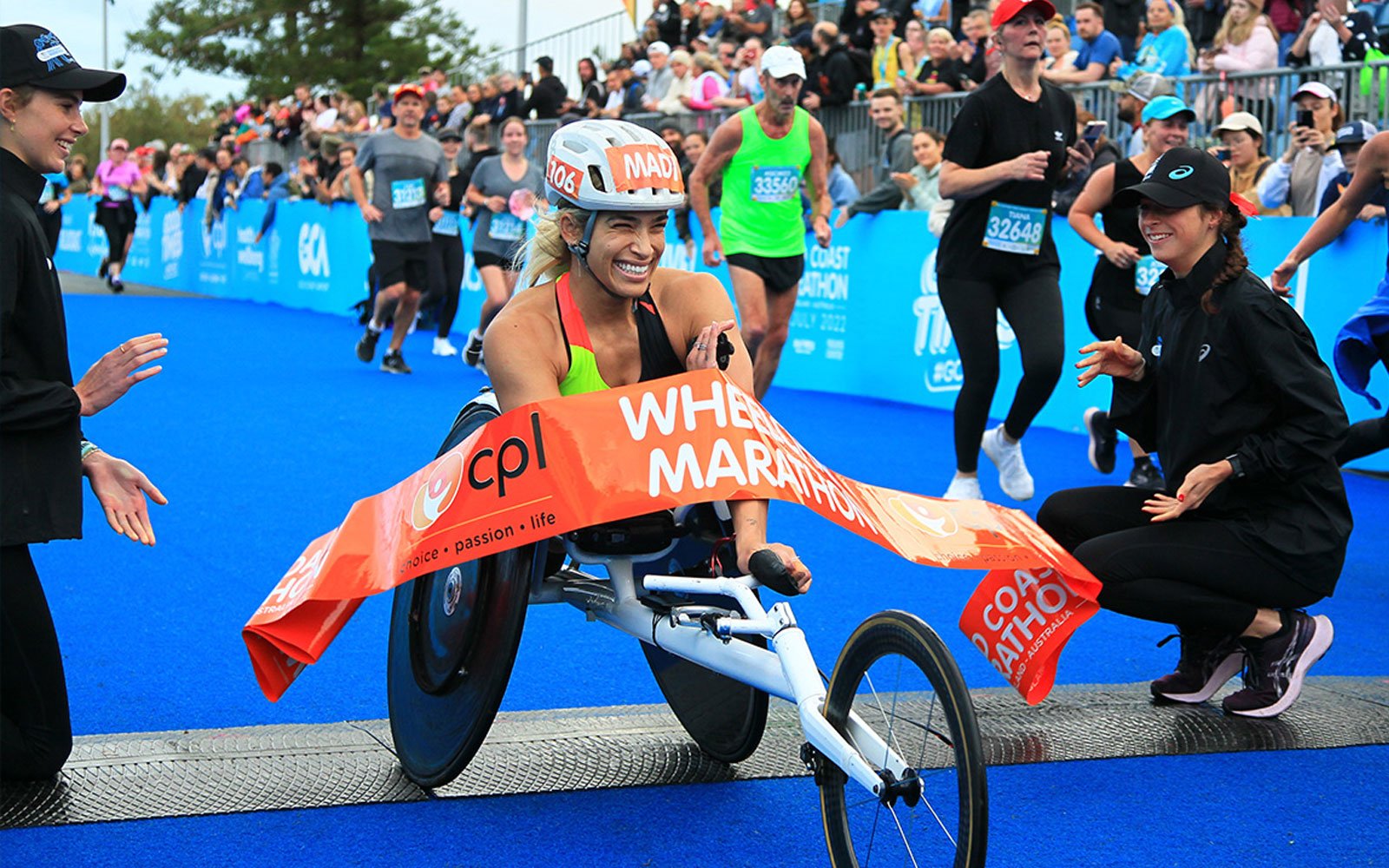 Gold Coast 2018 Commonwealth Games wheelchair medallists Jake Lappin and Madison de Rozario returned to the holiday capital to take top honours in the 2022 CPL Wheelchair Marathon this morning.
And for both, today’s efforts provided the perfect final competition hit outs before they wing their way to Birmingham for the 2022 Commonwealth Games later this month.

de Rozario’s third victory in the event in the blistering time of 1:46:58 came at the expense of race record holder and seven-time Paralympian Christie Dawes who had no answer for the rubber de Rozario was laying.

She finished second in a time of 1:47:27 ahead of third placegetter Jacqueline Godfrey who stopped the clock at 1:59:24 in her debut marathon.

de Rozario appreciated a little help from a friend.

“Christie and I worked together for the first 25km of the race and then I made a break and didn’t look back, I just held it,” de Rozario said.

“And this race is something I just had to do.

“I love this event, and I’d never miss it, especially with such a huge crowd on the side of the road lifting us all the way,” she said.

Lappin, who took the T54 1500m Commonwealth Games bronze medal in 2018, enjoyed the huge step up in distance and the change from track to road.

He said he appreciated the kind topography of the course which allowed him to finish in the slick time of 1:37:32 and well ahead of chasers Luke Bailey [1:46:01] and experienced campaigner Richard Colman [1:58:21].

“It was pretty good out there; it’s a good flat course with nothing really to slow you down and no huge climbs so it made for a pretty good race,” Lappin said.

“I just wanted to tick it all over and keep my arm speed up, and I think I did okay.

“There was a good vibe on course with great crowds and this was a good roll for me leading into the Commonwealth Games.

“Hopefully it sets me up for that one,” he said.

Earlier in the morning Ballarat’s Sam Rizzo took out the inaugural men’s CPL Wheelchair 10km by seven minutes over NSW’s Jono Tang and the Gold Coast’s Garth Plank-trained Elijah Palmer while the ACT’s Mikaela Dingley grabbed her own slice of history by snaring the first ever women’s 10km event.

Rizzo, whose tachometer recorded an average speed of 25.6km per hour, understatedly said he had ‘a good day’ out on course.

“I was looking at where I was at the 20-minute mark and was just trying to keep a decent tempo and keep a nice speed,” he said.

“My heart rate was up there, around 180 beats per minute, so I knew I was putting in.

“I’ve got a few more road races through winter, and I’ll definitely be back here next year,” he said.