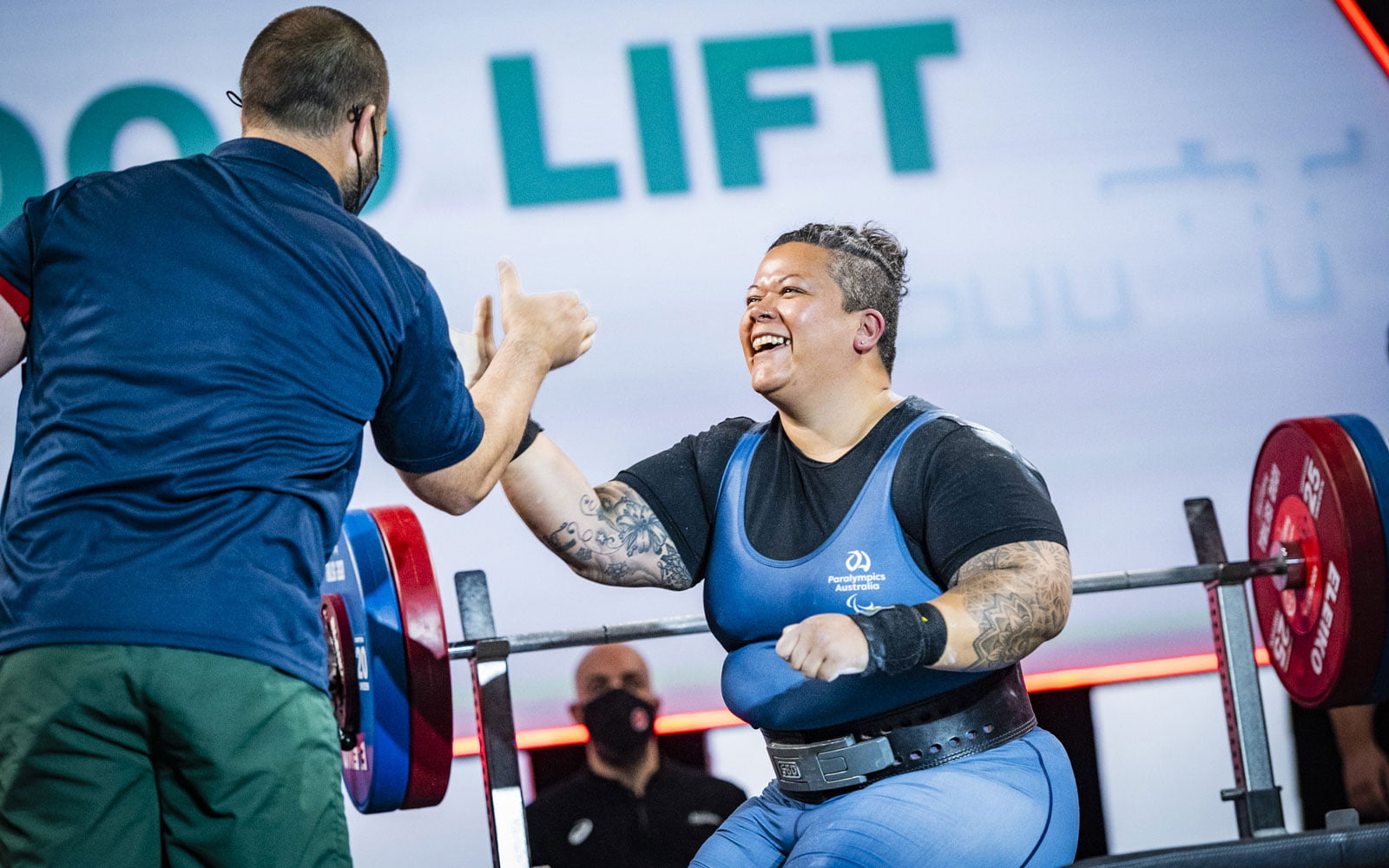 Hani Watson has been in outstanding form on the international stage after receiving a classification to compete only last year. She set a new Oceania record of 120 kg in the 86kg+ class at the World Championships in Georgia in October to finish eighth in the world.

Watson, whose late father Charlie encouraged his daughter to focus on her “superpower” when they trained together, further improved at a competition in February. She now has her sights on claiming gold for Australia at the Commonwealth Games, to be held between July 28 and August 8.

It’s been 16 years since two-time Paralympic Games silver medallist Darren Gardiner claimed Australia’s most recent Commonwealth Games medal in Para-powerlifting, a bronze at the Melbourne Games in 2006. But Watson – whose first name means to be at one with water in Niuean Polynesian – is a serious contender to break the drought.

“I just want to keep competing and lifting my ranking until the rest of the world knows that there’s this female Aussie they should watch out for,” Watson said.

“I’ve been competing for less than 12 months and to be ranked as high as I am in such a short time is the biggest highlight and pat on the back for me.”

Watson was born with bilateral metaphyseal dysplasia, which bowed her tibia and femur bones. She underwent several surgeries in a bid to correct the problem and turned to weightlifting with the encouragement of their father, who was a bodybuilder, to build her strength. The condition eventually stopped her from being able to complete squats.

Watson was then approached by Australian Para-powerlifting coach Simon Bergner, who steered her towards a new goal.

“My Dad always told me, ‘Focus on your superpower’,” she said. “Bench pressing has made me feel empowered, especially as a woman.”

Wright, who was born with spina bifida, made his debut for Australia at the Glasgow Games in 2014. He showed immense courage to compete again on the Gold Coast four years ago after breaking his back just 10 weeks before the competition following a seizure. Despite being diagnosed with compression fractures in four vertebrae, the three-time national champion showed grit to recover and represent Australia at the Games.

Wright is determined to post a podium finish at Birmingham and join Gardiner and Richard Nicholson, a silver medallist at Manchester in 2002, as an Australian Commonwealth Games medallist.

Wright said he was following an uncomplicated approach in his preparation for Birmingham.

“Follow the process and the results will look after themselves,” he said.

Paralympics Australia’s Senior Manager Para-sport Tim Matthews was thrilled for the two athletes and wished them well for the Games.

“Ben has competed before at the Commonwealth Games but this will be Hani’s first time. Both athletes have been performing really well in the lead-up,” Matthews said.

“Hani’s results continue to improve and we’re hopeful both athletes can compete very strongly against the rest of the Commonwealth.

“Paralympics Australia would like to recognise the hard work Para-powerlifting head coach Simon Bergner has done to prepare and train Hani and Ben in the lead up to Birmingham.

“Para-powerlifting is a sport we’d like to grow in Australia, particularly with the home Games in 2026, and we are hopeful more athletes can compete and qualify for those Games.”

“Congratulations to Hani and Ben on being selected for the Australian Team for the Birmingham 2022 Commonwealth Games,” Thomas said.

“Ben is heading to his third Commonwealth Games, while Hani is heading to her debut Games. They make for an exciting duo, which I’m sure will be a motivating factor in Birmingham.

“All the best to them both. I can’t wait to see them competing at the Games.”