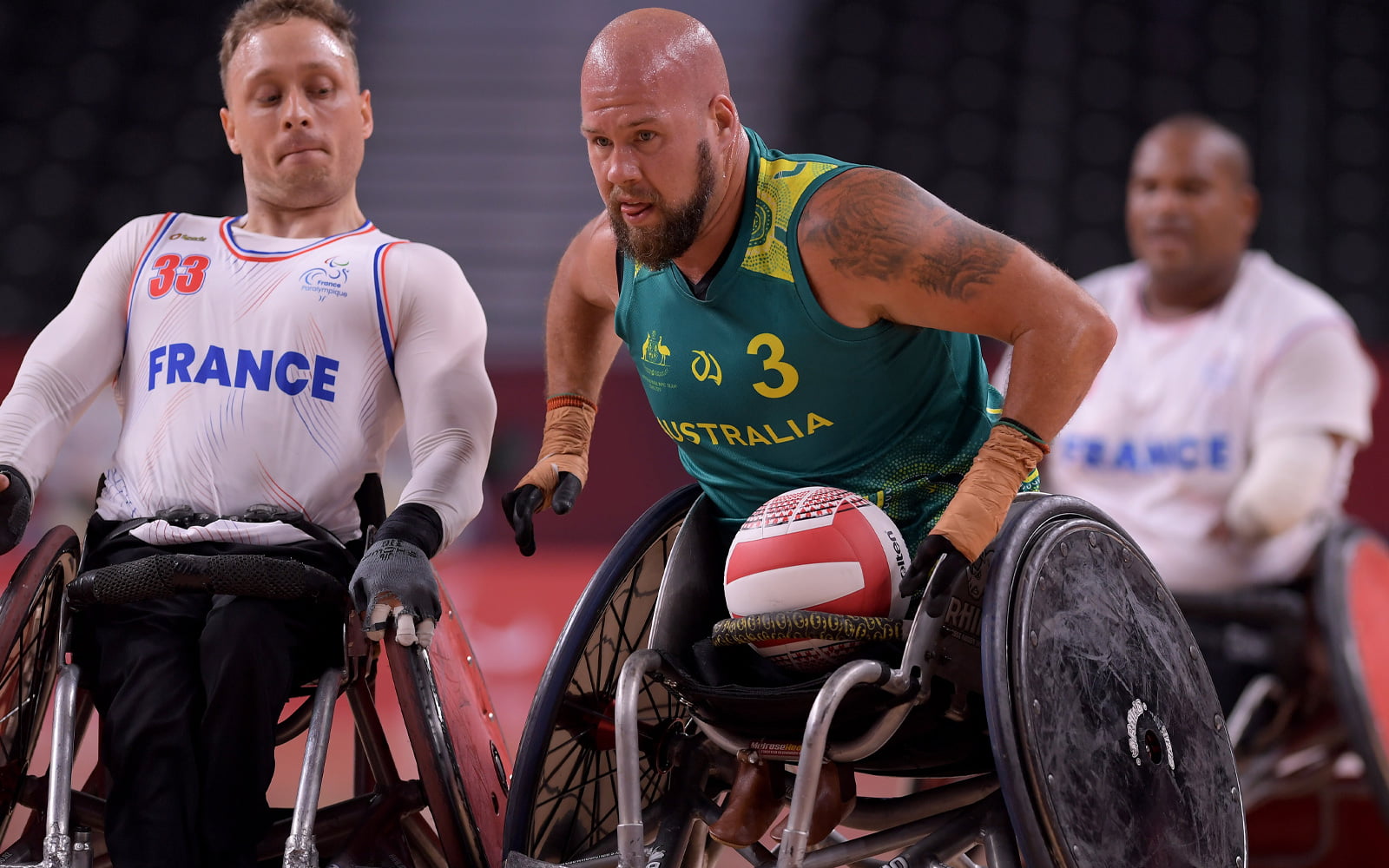 Sitting in the Steelers’ sombre change room after the reigning gold medallists had lost the bronze medal play-off to Japan at the Tokyo Paralympics, Ryley Batt felt almost certain his days representing Australia were over.

He had given everything he had to wheelchair rugby for 20 years and the toll of a problematic Tokyo cycle had proven heavy. The world’s best player’s seemingly limitless well of energy had finally evaporated.

“The Games were meant to be in 2020 and that extra year of waiting and doing a lot of training without any competition – I just missed the travelling and the camaraderie so much. That’s what we play our sport for.

“In March, before the Games, our family farm down on the Hawkesbury River got flooded. All my childhood memories were gone. It was a place that my grandfather had helped build for us and it really hurt.

“It all wore me down a bit and then the result we had at the Games didn’t go to plan. After that last game in Tokyo, I was feeling pretty burnt out. I was frustrated with the circumstances around our preparation and the cards we’d been dealt. After that game, to be honest, I did think that was it for me.”

In the months afterwards, Batt retreated home to King Creek near Port Macquarie on the NSW mid-north coast and prepared for life after rugby. At the forefront was investing more time in the CrossFit gym business he and wife Crystal had taken over the month before the Games.

Batt heard barely a peep from the Steelers group he’d so long been part of. However, at a candid re-connection with coaching staff in December, they made him an offer he couldn’t refuse.

With his long-time fellow 3.5 player Chris Bond unavailable for the Canada Cup in June, would he like to be involved? Emphatically, he answered ‘Yep!’.

Now, feeling fit, refreshed and having glimpsed into the mind of his future self, the three-time Paralympic medallist has revealed he intends to continue on to the Paris Paralympics in 2024.

“While I had my break the coaching staff was really good in that they really made sure I was left alone,” Batt said.

“I guess I started to sort of feel left out. It was weird because for so many years I’d been part of this Australian team and suddenly I wasn’t.

“I started wondering ‘What will I think in eight years’ time when I’m 40?’ If I didn’t go to Paris, I think I’d be pretty annoyed with myself. Right now I’m in my peak fitness years and I’ve still got the capability to play for Australia. When I’m 40, I thought, I don’t want to be asking myself ‘Why didn’t you just play on for another two and a half years?’

“That’s when I decided, yep, let’s do this. Now I’m just looking forward to getting back on the court and playing for Australia. Playing for my country, it’s the pinnacle. It’s what I thrive off.

“So, we’ll play World Champs [in Denmark in October], then maybe have a short break and then get freshened up for a year-and-a-half cycle into the Paris Games.”

It’s music to Brad Dubberley’s ears. The Steelers coach said he thought “there was a good chance” Batt was done after Tokyo. But as time passed, he sensed a change of heart.

“He needed some time to freshen up. He was still doing his gym and all that, but it was important for him to get away from rugby,” Dubberley said.

“While he was away he knew we were here for him, but I deliberately tried not to contact him. When he did get in touch, we’d avoid it being about rugby. He’d send us a screenshot and say ‘Who’s this player?’ and I’d say ‘How’s your holiday going, buddy?’.

In Batt’s absence, Dubberley blooded new players, moved some into different positions and started building a structure for the future.

“The reality is that all our athletes are crucial and our development program is phenomenal now, getting players involved and building competition for spots,” he said.

“It’s impossible to replace someone like Ryley but we have to eventually adapt and get the best out of all our players and see where it takes us.”

If Tokyo had been the end for Batt, the 32-year-old could feel satisfied he’d achieved all that wheelchair rugby had to offer. After arriving on the scene as a pudgy 15-year-old at Athens 2004 and then winning silver at Beijing 2008, he rose to become a global superstar of the sport. He led the Steelers to consecutive gold medals at the 2012 and 2016 Paralympics and World Championships gold in between, replacing the US as the sport’s pacesetters.

Having scaled the summit, Batt returns with a new mindset.

“I’ll be playing at my usual high intensity, highly-driven way. That’s just a given when I represent Australia – I just want to win at all costs,” he said.

“But the goal for me now is also to help develop this team. It’s not going to change me as a player, but I just want to make sure that when the time does come, I’ve given back a bit of what this team has given me.

“It’s almost like having a child, you know? I’ve spent two thirds of my life playing this sport and you don’t want to just go ‘Oh well, good luck with it all. Catch you later’. You want to make sure everything’s OK.

“I think the program’s in a great position now, so elite and professional. There are good new players coming through and lots of potential for the future.

“From where I started to where it is now, it’s just great to be seen by the public as the elite athletes we are. We put in the effort, we’re funded like that from Paralympics Australia and from sponsors, there are a lot of people behind us and it’s an amazing time to be an Australian wheelchair rugby player.

“When I retire it’ll be hard, but I’ll know that the program is in good shape, there’s depth there and it’s in good hands.”

With his new commitment, Batt is focused on his first tournament back, the Canada Cup, which starts on June 2 in Richmond, British Columbia.

“It’s quite nerve-racking,” he admitted. “I’m excited and nervous to get back in the chair and play at that high level again.

“For the team, it’s a building block. But, as long as we’re firing at the World Champs later in the year, that’s the main thing.

“We’ve got a tough schedule against tough teams. We might not get the results we want, but we just need the experience and getting our mojo back. Whatever the outcome, hopefully we’ll get to the end and just think ‘Wow, that was really good’.”