Gratitude, Pride And A Few Tears As Perrine’s Career Ends 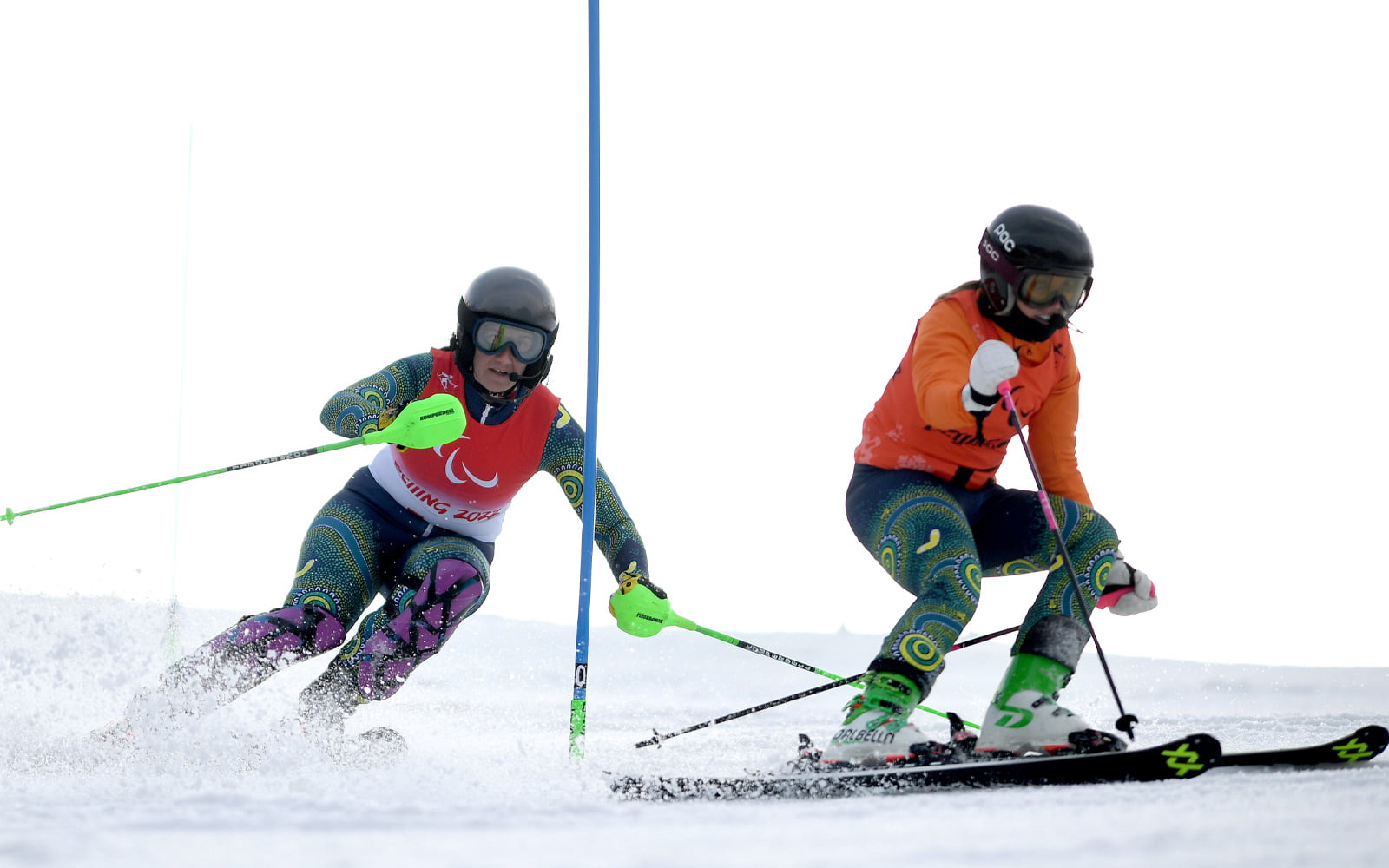 The tears rolling down Mel Perrine’s cheeks told the story. The fairytale finish to her exceptional career so many had wished for was not to be.

Yet, after striking a gate and recording a DNF in her final Paralympic race, there was also an overwhelming sense of pride and gratitude for the extraordinary life she has led as one of the nation’s greatest Para-skiers.

“It has been a tough campaign for me, it’s been a tough season and a tough four years to get back here,” said Perrine, who was guided by her good friend Bobbi Kelly.

One of the bittersweet catch cries of Beijing 2022 among the Australian Team has been “That’s ski racing”, a three-word summary of the emotional roller coaster that is alpine skiing and the sometimes wretchedly small margins that dictate the difference between agony and ecstasy.

Perrine is, by virtue of her vast experience, well qualified to use the phrase, this time to encapsulate her coming unstuck early in the course as she pushed hard after a cautious first run.

“I pushed out of that start gate up there with every intention of giving it everything I had – and I did,” she said.

“And, that right there, that’s ski racing. A couple of inches can be the difference between the best run of your life and straddling a gate, especially in Slalom.”

Her final run, under blue skies at Yanqing National Alpine Centre outside Beijing, didn’t yield the desired result. But there is so much for Perrine to celebrate: two Paralympic bronze medals, four gold, four silver and four bronze medals at World Championships. She also has earned enormous respect and made countless friends, not least her Australian teammate, Mitch Gourley.

“It’s been an amazing journey. I’m a four-time Paralympian, but everybody just sees the four times that I’ve been at these Games,” Perrine said.

“Mitch and I have been travelling the world together for 13 years, we’ve competed at World Cups, been away from home for up to six months every year, we’ve experienced every emotion possible together. To have him here, to experience this with him for our last time, it’s been emotional, but it’s been the best.”

At the other end of her career was Rae Anderson, the former Australian Paralympic Summer Team representative making her Winter Games debut and joining the six other Australians since 1976 who have competed at both seasonal Games.

Anderson, after finishing in the top 10 in the Giant Slalom the previous day, recorded another superb result, coming seventh in the Slalom Standing category, signalling her potential to emulate Perrine.“To perform on my second run after what was a really hard first run, I’m just stoked,” Anderson said. “It’s just amazing. So many emotions right now.”

It was a brave run by Anderson, who said she had never pushed her body so hard. Backing up a day after the Giant Slalom, she struggled to get her body moving on the first run of the Slalom and praised Paralympics Australia medical staff for helping her recover.

“I joined this sport to push myself and try something new and embrace every opportunity,” she said.

Of being able to share the stage with Perrine, Anderson said: “To be able to have a competition with her and the Paralympic Games experience with her before she retires is really special. I’m just so grateful that the timing worked out perfectly for the pair of us.”

With only the men’s Slalom competition remaining at the Yanqing Alpine Centre, four-time Paralympian Mitch Gourley is set to lead the charge in the final race of his illustrious career on Sunday.

Racing starts at 11:30am AEST. All entrants complete two runs on the course. The second session starts at 3:30pm AEST.