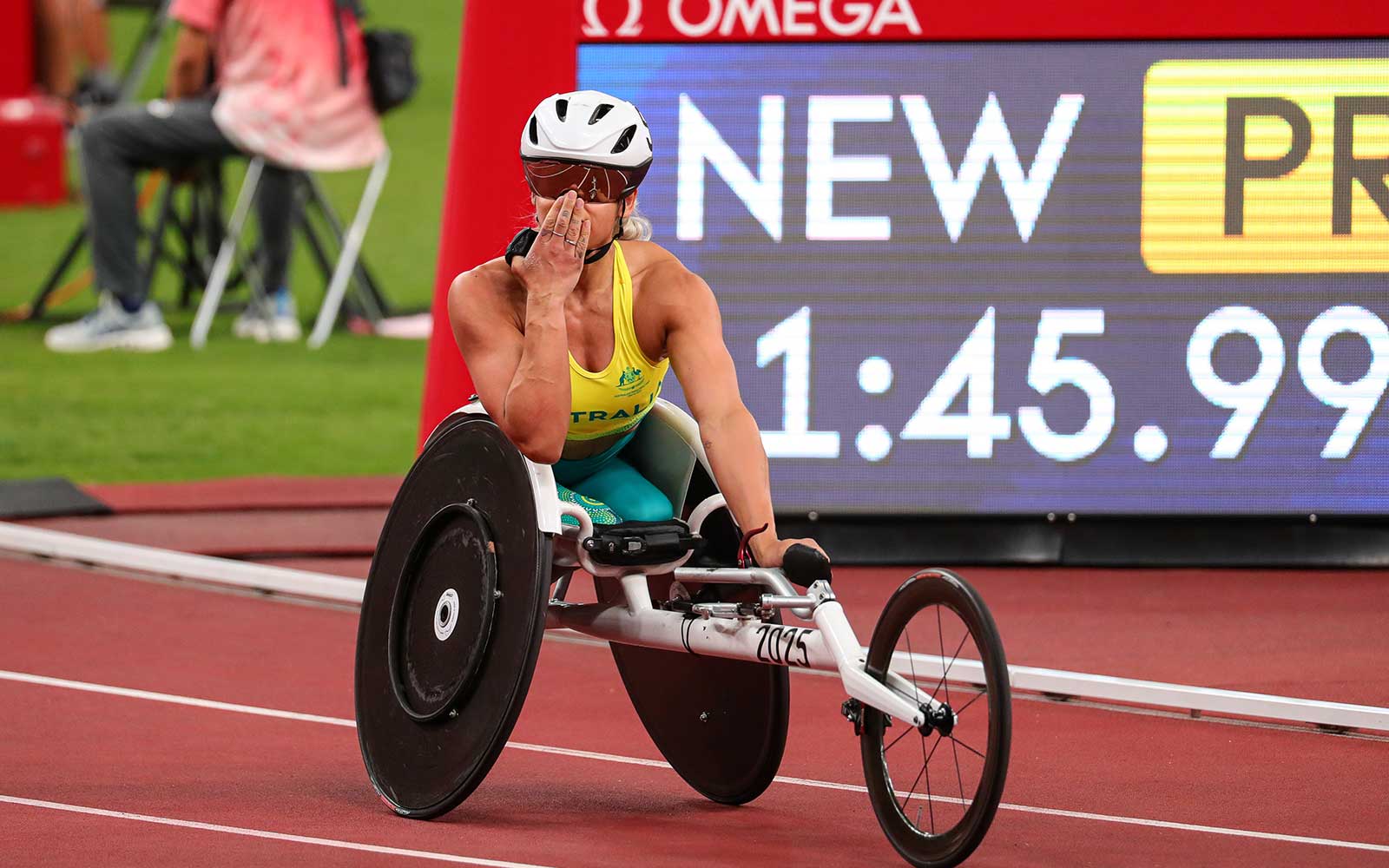 The 27-year-old is the current World Champion and world record holder for the 800m (T53) but sometimes those accolades don’t translate into gold. Tonight they did, to make a very special connection.

De Rozario and her coach Louise Sauvage, who won the 800m gold in Atlanta in 1996 now share the title of Paralympic champions.

“Lou has allowed me to be the person and athlete I am,” de Rozario said of the journey the pair have taken with silver medals in both Beijing in 2008 and Rio in 2016.

De Rozario finally has her gold in her fourth Paralympic campaign.

It was 0.46s shy of her WR but de Rozario showed her dominance over China’s Zhou Hongzhuan (silver) and Switzerland’s Catherine Debrunner (bronze) by manoeuvring to the front in the back straight of the second lap and holding that lead to the finish line.

“For so long I’ve seen myself as only a silver medallist, de Rozario said. “Our sport revolves around the Paralympic Games. Your life as an athlete is all about that four-year cycle – you cannot escape it. Every decision is made towards getting a result here.

“Mentally, physically, all of it needs to come together in a minute 45 (seconds) at a Games. So to actually do that when it counts, it means so much to me – and for the work I’ve done since 2008.”

“Madi did phenomenally,” Ballard said. “It’s so cool watching what she’s done. This season she’s been pushing so well so it’s really lovely to see her do it.”

The breakthrough gold for the Australian athletics team was just one of four medals taken on Sunday.

Isis Holt completed the sprint double with the 200m (T35) silver to add to the 100m silver on Friday night – again finishing (27.17s) behind her Chinese rival Zhou Xia (27.94). It was her fifth Paralympic medal from two Games: four silvers, one bronze.

“It can be easy to forget the value of these medals when they may not be exactly the colour that you want. It is special and definitely something to be proud of,” Holt said.

It’s also something Holt will carry for another three years to Paris 2024.

“There’s nothing quite like winning silver that makes you want to come back and win gold.”

“This gives me more hunger. I’m just going to come back and work even harder,” Perris said.

“Straight after the race I shed a few tears out there on the track – I was a bit stunned because I have high expectations of myself. I put a lot into this but today just wasn’t my day. But it’s definitely not the last you’ve seen of me.”

Sunday opened in the best possible way with two bronze medals to wheelchair sprinter Robyn Lambird in the 100m (T34) and field specialist Sarah Edmiston in the Discus (F44).

“I’ve played a bit of (wheelchair) basketball and rugby but then came to athletics (in 2015) and have loved it ever since. So it’s been a dream for probably 10 years to get here. To debut and get a medal…. you can’t ask for more.

“I’m super-stoked. It wasn’t a PB so I wish I’d gone that little bit faster but it was a season best. I’ve had a few injuries – the usual thing, shoulders and hips – so I’m just so happy I managed to put it out there today.”

And the phone hasn’t stopped. Lambird has family in the UK and in Perth.

“I just quickly looked at my phone before the (medal) ceremony and there were a million messages there. So I’ll give all the family a ring,” she said.

“I know my UK family stayed up until 2.30 in the morning to watch, so I’d better ring them first.”

Edmiston hasn’t missed a podium on her three major internationals: bronze at the 2017 World Championships in London, silver in the 2019 Worlds in Dubai, and now bronze in Tokyo.

And although she’s about to turn 46 next week, Edmiston isn’t walking away any time soon.

The (2020 Games) delay for me – being a bit older – was super hard and I was always a bit concerned with the younger talent coming up they might be able to beat me,” Edmiston said.

“But it’s about coming through on the day So I’m happy and so relieved. The conditions were really good for me today as I love the hot weather. There were a few nerves but I had a plan and I feel like I executed that perfectly.”
Although a late bloomer, Edmiston, who is a mother of four and now a grandmother of two, is a wonderful time manager. She also has former three-time national hurdles champion Paul Edmiston in her corner.

“I have a lot of help – two of my kids have left home now as they’re a bit older – so with just two around now it makes it a bit easier. And I have an amazing husband, who’s also my coach, and I couldn’t do this without him.