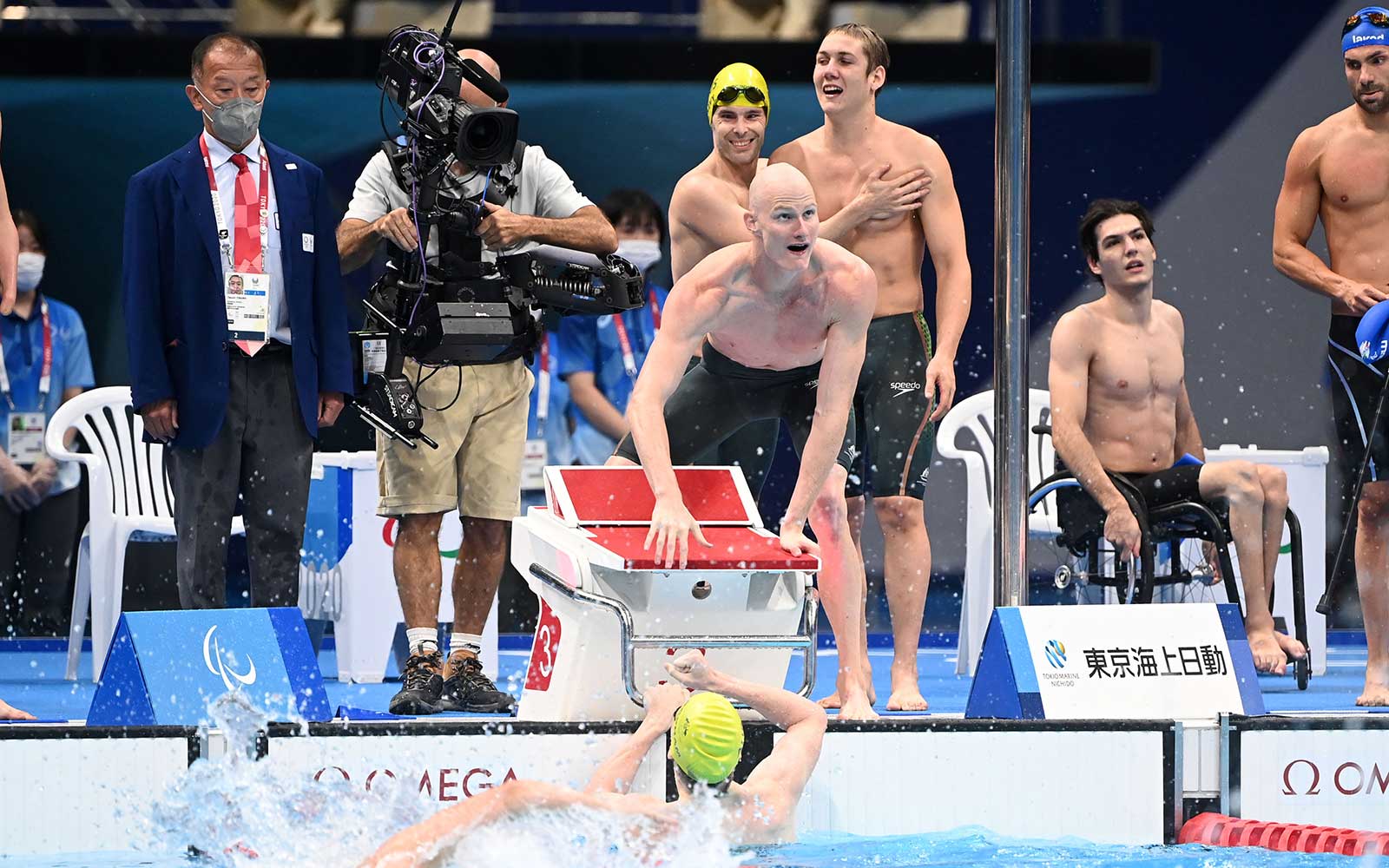 It was definitely worth the wait!

In the final event of the night – the Men’s 4x100m Freestyle Relay (34 points) – the Australian team of Rowan Crothers, Will Martin, Matt Levy and Ben Popham smashed Italy’s world record by nearly two seconds to triumph for gold in 3:44.31.

The gold marks Australia’s fifth in the pool and second for Crothers, Martin and Popham after they won races on the opening night of the competition.

In a thrilling race, Crothers (51.35) led out to give the Australian team a commanding lead heading into the first change. Martin (54.53) dived in next and held his position ready for Levy’s (1:01.30) changeover and then finally, it was Popham’s turn to anchor the relay and bring it home. With the current world-record-holding Italian team surging fast in lane four, Popham (57.13) managed to hold on for the Aussies to claim gold.

Walking off pool deck with amazement in their eyes, they couldn’t believe what they had just achieved, even though it had been a dream to stand as a team atop of the dais.

“We’ve been wanting to win this for the last five years and it’s been a major focus for all of us boys, so we said ‘alright, from the start until the end we’re not giving up first’, so that was the idea,” Crothers said.

“We wanted to lead off strong and then come back in strong with Will, and then Matt has five Paralympic Games worth of experience, and Benny coming home, I couldn’t be prouder, not because he’s my best mate but for all of us – it’s an amazing job.

“It means everything to win something as a team. In an individual event you’re representing yourself and your country but in the relay it’s just Australia, it’s 23 million people back home, we’re carrying it through for all of them as well as us, so it’s so special to not just have that medal, but the world record now – Australia is on top baby!”

Popham echoed Crothers’ sentiments and highlighted it felt different being in the lead not knowing who was coming up behind.

“You know, I usually chase people down for a living, so it was interesting being out in front,” Popham laughed.

“Obviously I had a massive lead coming into the last leg and I just had to hold but the lead wouldn’t be possible without the first three legs so I’m just happy and proud of these boys.”

In a highly competitive field stacked with quality opposition, Hodge turned fourth at the halfway mark and from then on continued to gain momentum throughout the final 50 to narrow the gap with the lead pack. Relying on his strong back end, the Commonwealth Games silver medallist moved up another gear with 15 metres to go to take out third spot on the touch. The last time Hodge produced a personal best on the world stage he walked away with a bronze medal at the 2019 World Para Champs in London, and now he has done it again in Tokyo to secure his maiden Paralympic medal. Fellow Dolphin teammate and decorated Paralympian Brenden Hall also lined up in the final and finished eighth in 1:05.90.

Having placed sixth in Rio as a 15-year-old, Hodge was overjoyed with his performance against classy opponents and pleased he was able to deliver the strategy he and his coach had worked so hard on.

“I’m absolutely ecstatic. I knew going into the race I was ranked fourth and it was very close between the top few guys so I knew that it would be anyone’s game on the day, and I had my fingers crossed I could jump into that medal tally and thankfully it paid off,” Hodge said.

“Going into that race I was really focussed on the race plan and the execution.

“My coach and I had drilled it a hundred times before, and so it was just repeating that. He also told me I knew what I was doing and do what we’d been training for all this time, and it’s finally paid off.”

Hodge will now look towards his next event, the Men’s 200m Individual Medley (S9) on Wednesday.

The ever-inspirational Ellie Cole continued to show her class in the pool, placing fourth in the Women’s 100m Backstroke (S9) in a time of 1:13.15 – 0.35 of a second faster than her heat swim. In her once favoured event, the back-to-back reigning Paralympic champ left nothing in the pool and was pleased with her performance considering she suffered a serious hip injury in April 2020 which has since hampered her natural ability in the stroke.

Although she placed fourth in the backstroke, Cole did make her way to the podium on Monday night after the Women’s 4x100m Freestyle Relay (34 point) medal ceremony was postponed last night due to a protest and appeal for disqualification. The team of Cole, Isabella Vincent, Emily Beecroft and Ashleigh McConnell initially touched for bronze but were promoted to silver after the gold-medal-winning USA team was disqualified. The final result was confirmed last night, with the Australian quartet named as silver medallists.

Action from the Tokyo Aquatics Centre kicks off again tomorrow morning with heats starting from 10am AEST.