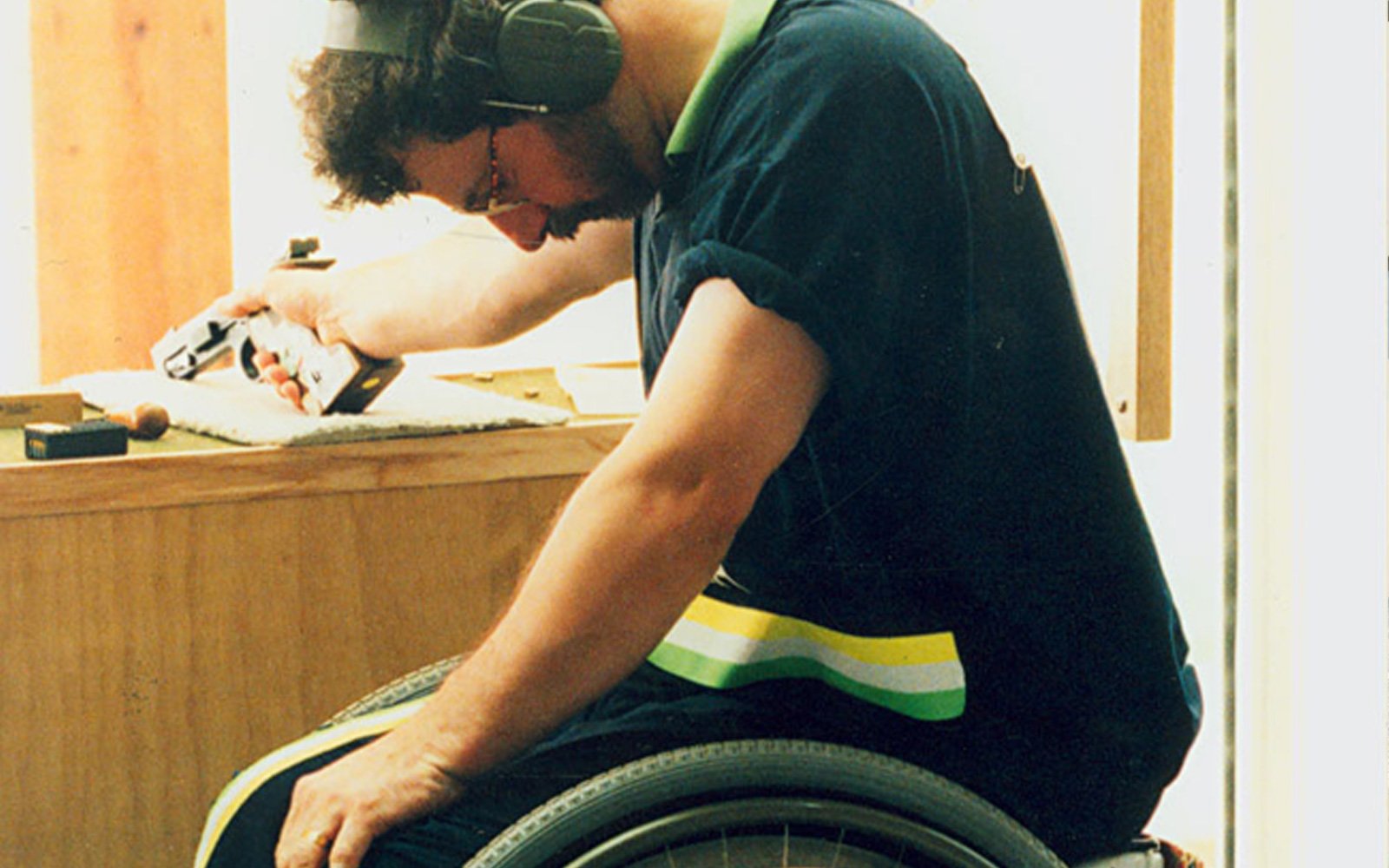 James Nomarhas always had the genes to be a world class Pistol athlete, but he never knew his pedigree for Shooting until after he captured a silver medal at the 1996 Atlanta Paralympic Games.

In his pursuit to find a sport where he could excel with cerebral palsy, Nomarhas tried track and field and swimming, but without success.

He said he impersonated the “sinking Titanic” when in the pool and tried “chuck, throw and heave”, more commonly known as discus, javelin and shot put, but found the throwing actions placed too great a strain on his back.

It wasn’t until he met Australian Paralympic Pistol and Rifle athlete, Keith Bremner, in the early 1990’s that he decided to try Shooting.

“I never knew there was Shooting for people with disabilities, so I decided to give it a go,” said Nomarhas.

Within a few years, Nomarhas won Australian team selection for the 1994 FESPIC Games in Beijing.

“That was real fun and an eye opener,” recalled Nomarhas.

It was only when his aunty Katina showed him an item from a Greek newspaper from the 1960’s after the Sydney 2000 Paralympic Games that he learned his father Sam won a shooting competition while he served in the Greek Army.

“That’s the weird thing. I didn’t know he had won an Army Shooting competition. He served in a machine gun company but, like many from the War, didn’t discuss his time in the Army,” he said.

Nomarhas earned selection for the Atlanta Paralympics and was thrilled to return home with the silver medal in the Mixed Sports Pistol SH1 event.

Also competing on the line with Nomarhas was Bremner and Iain Fischer, but only Nomarhas qualified for the final.

In the final, the event was dominated by Russian soldier Andrey Lebedinskiy who easily captured the gold medal scoring 683.2 with Nomarhas (660.7) holding off the fast-finishing German, Roland Hartmann, to claim the silver medal.

“I was just so focused. I didn’t know what was going on. The match went for around two hours, but I can only remember about 15 minutes,” he said.

“At the end, I asked my coach how I went. In the greatest understatement of the year, he said I went reasonably well,” he said.

With a Paralympic Games silver medal safely tucked away, Nomarhas was then a member of the 10-member Australian Shooting team for the Sydney 2000 Paralympic Games which also included the legendary Libby Kosmala and the late Ashley Adams.

In a busy competition schedule, Nomarhas was also entered for the Mixed Free Pistol SH1 and the Men’s 10m Air Pistol SH1 events.

Nomarhas’ hopes to emulate his Atlanta podium success in the Mixed Sports Pistol SH1 event were undermined when severely hampered by rheumatoid arthritis at the Games.

Nomarhas also finished 10th in the Mixed Free Pistol SH1 where he missed the final by a mere one point.

In addition to his illness, Nomarhas admits he was unable to replicate the same steely-minded focus that he was able to produce in Atlanta.

“Sydney was the best Games. It was brilliant,” he enthused.

“It was an interesting time competing in front of family and friends. I tried to get the same focus, but I got a bit carried away,” he added.

Nomarhas was selected for his third Paralympic Games in Athens in 2004 and the experience was particularly gratifying given his Greek heritage.

In Athens, Nomarhas lined-up for one event, the Mixed Sports Pistol SH1, and finished 10th again after missing qualifying for the final again by a mere three points.

After Athens, Nomarhas stepped down from chasing Australian team selection.

“It was costing me a lot of money to compete and it was affecting my family life,” he said.

He continued to shoot on home soil and broke the Australian P1 10m Air Pistol record when setting a new mark of 556 at the National Championships held in Cessnock in 2009 – a record which remains in place today.

Now aged 69 and living in Wallendbeen with his wife Carole, just outside Cootamundra, Nomarhas continues to shoot socially at Young and Harden Pistol Club.