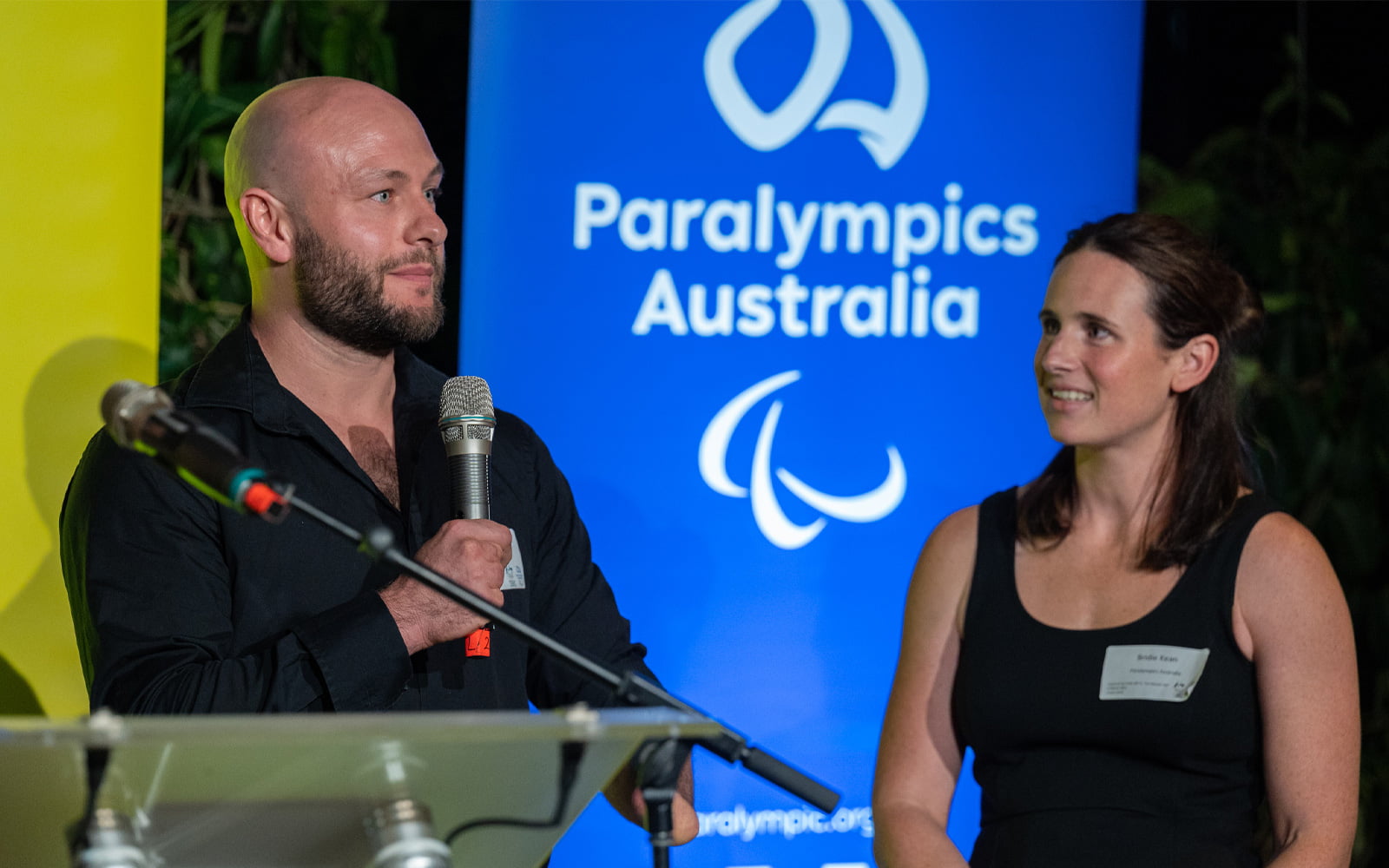 The vital role of Paralympic sport in promoting positive social outcomes was recognised with the launch of the Queensland Parliamentary Friends Group (PFG) for the Olympic and Paralympic Movements at a function at Parliament House in Brisbane on Tuesday night.

Among the goals of the bi-partisan Group, co-chaired by Joe Kelly MP (ALP), Member for Greenslopes and Tim Mander MP (LNP), Member for Everton, is to promote and raise awareness of the benefits of participation in sport, including improved health, longevity, fitness, skill, achievement, social interaction and general wellbeing.

The establishment of the PFG coincides with Australia’s bid to host the 2032 Paralympic and Olympic Games in Queensland.

Lynne Anderson, Paralympics Australia’s Chief Executive, said the PFG would play an important role in creating practical steps to ensure all Australians, particularly those with a disability, gain the opportunity to engage in sport to the level of their choice, free from barriers.

“A potential 2032 Paralympic Games in Queensland presents a tremendous opportunity to champion societal change for all Australians with a disability,” Anderson said.

“This is a once-in-a-generation chance to potentially bridge the gap in creating access to increased health, education, employment, transport and accessibility and the related social inclusion benefits.”

Anderson said Paralympics Australia’s goals extended beyond the preparation, delivery and management of our Paralympic Teams.

“They encompass the entirety of the Para-sport journey, from grassroots to the world stage,” she said.

“Central to this objective is changing the narrative around disability and highlighting the benefits and opportunities that come from diversity and inclusion. Our athletes have shown us that real change comes from seeing what can be done, rather than what can’t be.”

The PFG is open to all Members of Parliament and will promote the values of the Paralympics and Olympics in Queensland. The launch tonight was also attended by Matt Carroll, the Chief Executive of the Australian Olympic Committee, and a range of Queensland sport administrators, Olympians, Paralympians, business and government representatives.

Among the PFG’s other objectives is to promote Paralympic and Olympic sporting, health and educational programmes in schools, universities, sports and physical education institutions and to promote participation in sport without discrimination.

The vital role of Paralympic sport in promoting positive social outcomes was recognised with the launch of the Queensland Parliamentary Friends Group for the Olympic and Paralympic Movements in Brisbane on Tuesday night.

“The Olympic and Paralympic movements inspire young people to try, to get involved in sport and to strive to keep improving,” Mr Kelly said. “There will be young kids watching our athletes in Tokyo and thinking ‘I want to do that in Brisbane in 2032’.”

“There’s many lessons for everybody in society from the Olympic and Paralympic movements, including members of Parliament. Lessons of trying to do your best, trying to rise above the day to day to see the bigger picture,” Mr Kelly concluded.

“This is a once in a generation opportunity for Queensland as a whole,” Mr Mander said. “As a sports lover I’m excited about it but also using this as a catalyst for infrastructure development.

“In these tough times in recent years, Olympians and Paralympians have shown they can lift the morale of the country. This Friendship Group is a great opportunity to promote enjoyment all the benefits of sport – health, community as well as individual accomplishments.”

“Thank you to all the Queensland members for supporting this wonderful initiative and for your embrace of the immense benefits that Olympic and Paralympic sport can bring to your communities,” Mr Carroll said.

“Right now hundreds of Queensland athletes are training and competing to realise their Olympic or Paralympic dream in Tokyo – and in less than 140 days those athletes will help inspire, thrill and unite millions of Australians cheering them on back home.

“With the exciting prospect of a potential home Games in 2032, we look forward to continuing to work with the members of the PFG to promote and maximise the benefits Olympic and Paralympic sport can deliver to the people of Queensland.”