How Our Paralympic Innovation Team Is Changing The Game 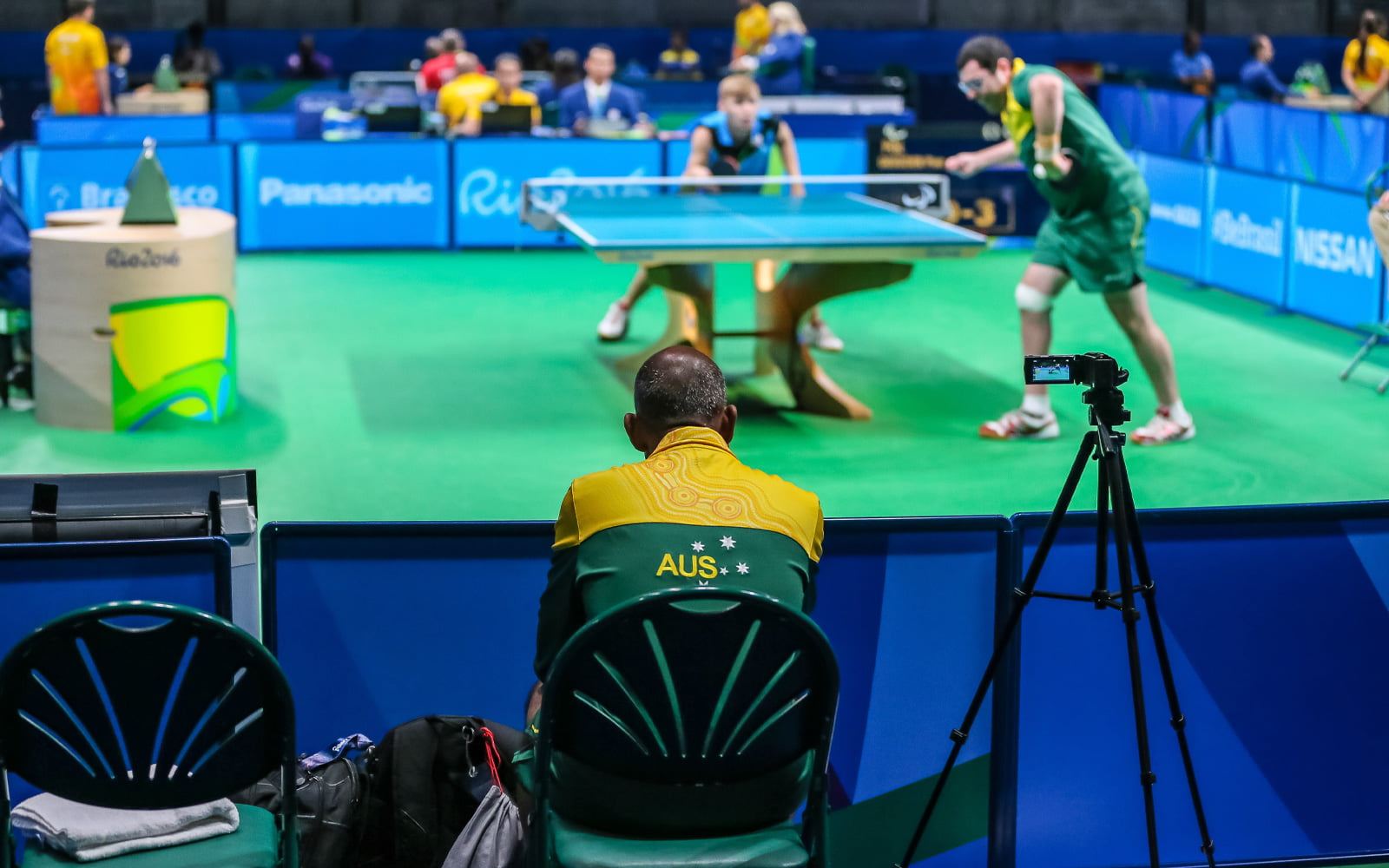 In the high-pressure world of top-level coaching, sometimes less is more.

“During a match we’ve got one minute between games to communicate with the athletes,” said Rosario, Australia’s Para-table tennis head coach.

“Getting it right can mean the difference between winning a medal or not.

“Often you feel a bit stressed in that minute and you want to just blurt out instructions. Previously, I’d have spent it preaching to the athlete. But what I’m learning now is to turn it more into a conversation or even let the athlete start with their thoughts.

“Once they’ve given their thoughts about a serve they might be having trouble with, or their feelings about a particular ball, I can lead them towards what I’m seeing as well.”

The value of listening instead of preaching is one of several lessons Rosario has learnt from collaborating with Paralympics Australia’s skill acquisition experts and its Paralympic Innovation Team.

“In our discussions with coaches, a topic that regularly came up was the importance of questioning,” Pinder said.

“Rather than proscribing to an athlete ‘This is what you need to do’, it’s about using questions to give the athlete the ability to discover their own way of doing things and allow them more flexibility to individualise solutions. The issue of questioning then leads to discussions around the language used, the tone, body language…

“What we found is that there’s not a lot of evidence around what good questions look like. That’s why we went outside of sport. It allowed us to get some different perspectives around what’s possible.”

The first presenter was John Hartigan, a Paralympics Australia Board Member with over 40 years’ experience in media. The second was Paul Roberts, an expert in human-centred design and design thinking at Qantas and QBE. Roberts was joined by Dr Jerome Moulin, whose work with Optus and Qantas was in driving cultural change

In Webinar three, Dr Mary Dahm, a Research Fellow at the Australian National University, discussed her work on the cross-section between health communication and linguistics. Finally, Paralympics Australia Board Member The Hon Tim Carmody presented on strategically adapted questioning, gained through his many years’ experience in law.

Fantastic insights from The Hon Tim Carmody. Great to be able to provide this platform for our Para coaches

“In the media it used to mean ‘getting someone’s attention’, whereas now it’s probably about hyping a story,” Pinder said.

“That led to really interesting discussions around how a coach can remain ‘memorable’ but also genuine in their delivery. It’s a concept I think a lot of the coaches took away in terms of finding their own style that makes an impact and is received well by the athletes.”

In Webinar two, Roberts’ and Moulin’s emphasis was on empathy.

“It was a chance to really dig down into what empathy is and how coaches can use tools to apply it,” Pinder said.

“Primarily it’s around the individualisation of communication.”

Individualising communication is important particularly for Para-athletes, Pinder explained, as they often “don’t necessarily have the same language or training habits that emanate from a culture of being in that sport from the grassroots”.

“For coaches to really understand how that athlete sees the world it’s important to ask better questions and avoid making assumptions,” Pinder said.

“It’s also about creating a space for the athlete to ask questions and voice their concerns.”

Check out how our Paralympic Innovation Team is changing the game via a number of new initiatives, including the recent #ParaSport Coach Webinar series.

In the third session, Dahm talked about the gestures and opportunities coaches can use to welcome feedback and ideas from athletes. Among the topics covered were the influence of language on expectations and being mindful of using technical terms to suit the receiver’s level of understanding.

“For the final one, we pushed the boundaries a bit more,” Pinder said of Carmody’s Webinar.

“We brought in coaches to have conversations with Tim online, to pitch their real life communication challenges and share ideas. It was one of the best received of the four.”

At its heart, the Webinar series was an acknowledgement of the huge impact coaches have and how small changes in the relationship between athlete and coach can make big differences.

“Many people are probably not aware of the amount of time we spend working with our national coaches,” Pinder said.

“One of the most enjoyable parts of my job is working with coaches who are hungry to learn and grow, who come to you and ask ‘How can we do this better? Have you got any thoughts for how we design this or run that?’

“Essentially, we’re here to collaborate with coaches and co-create world-leading learning environments. We’re excited to run another series and push the boundaries a bit further.”

“It’s particularly important for us, as we’ve got a decentralised program and players coming in and out. For instance, at the last camp, we had an athlete there who hadn’t been involved for a few years at international level and they had terminology that was being used five years ago.

“The lesson was that it’s not productive to have too wide a range of terminology to describe various performance-related concepts. We haven’t flicked a switch and now we’re all good, but we’ve identified there’s areas we can be better with our communication. Now we’re working with Stephen and Ross on an action plan to put in place.”

Campbell said he wasn’t surprised to gain such insights from people outside of sport. In fact, he said, having non-sporting presenters actually opened the door a bit wider.

“You listen and learn from all different areas,” Campbell said.

“Often we facilitate life skills through sport, so it makes sense that other areas of life will have experiences or structures we can learn and adapt to sport.

“I think having these discussions with people from other areas also got rid of the competition that sometimes exists between sports. We weren’t competing for funding, competing for athletes to play our sport instead of another, or anything like that. I think people become more willing to listen and learn when they don’t feel threatened.”

Para-table tennis coach Rosario is doing lots of listening these days. At a camp in Melbourne recently, Rosario implemented one of his big Webinar series lessons to stunning effect.

“One of our players, Sam Von Einem, was playing matches with some of the able-bodied group and, in one close match – a seven-setter – instead of doing all the talking between games, I asked him ‘How did that feel? What was happening there?’ Rosario said.

“The insights were quite different. He was telling me about serves he felt uncomfortable with that I didn’t pick up at all. He verbalised it and then we discussed it.

“It was obviously the first thing on his mind. If he goes back to the court with that still unsolved because I’ve just told him everything I was seeing, it’s going to stay a problem for him.

“The outcome was amazing. He was able to turn the match around through dealing with that service he was having trouble with. It was something I didn’t have in my list of things to tell him. But, through his insights and us then problem-solving it, the game completely changed.”