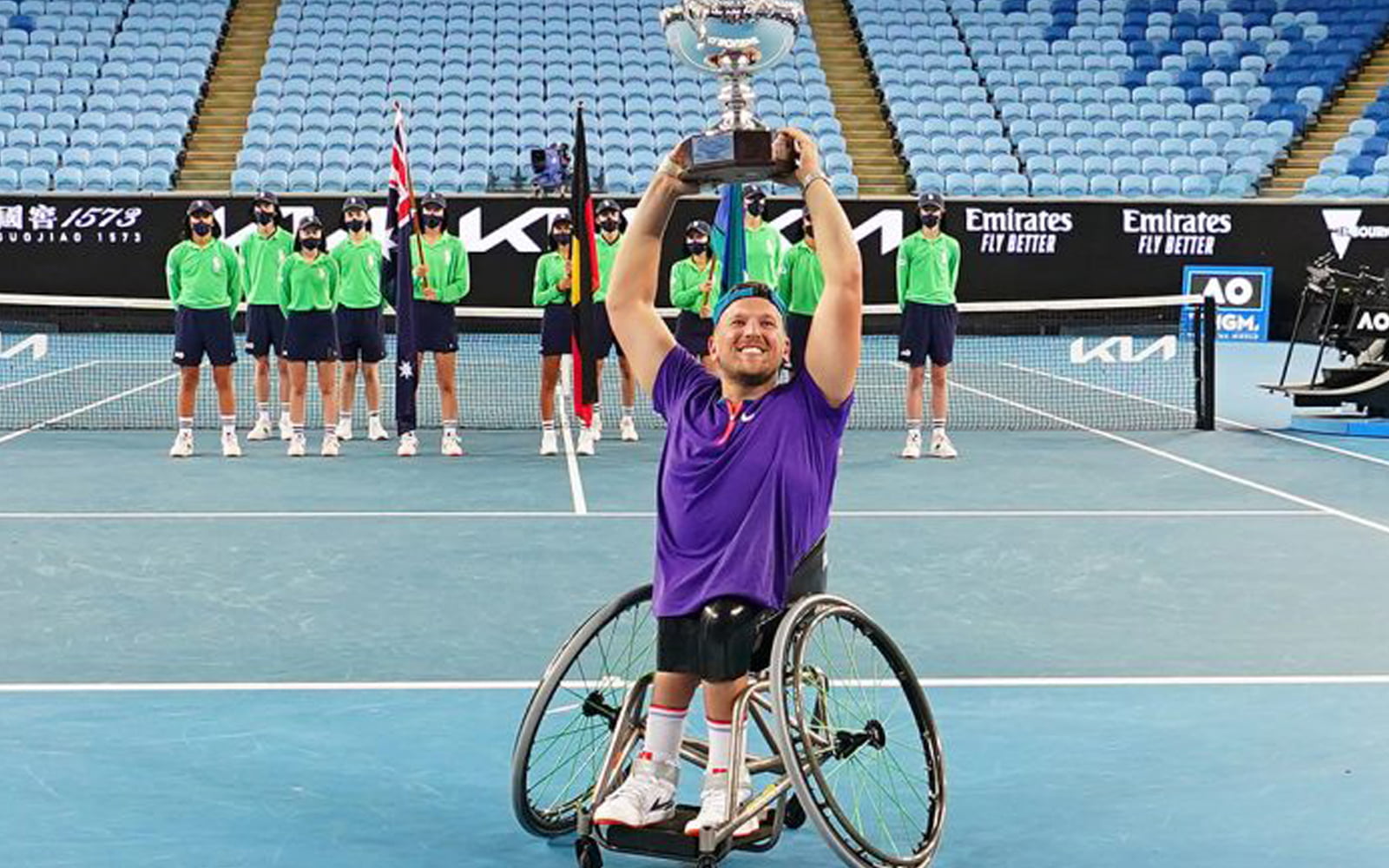 The 30-year-old has done it 20 times now – twice this week in Melbourne.

A seventh straight Australian Open quad wheelchair singles title – the day after he’d claimed a fourth Australian Open doubles title with Heath Davidson – is the latest in a long line of history-making achievements for the world No.1 from Melbourne.

Alcott’s 6-1 6-0 victory over Sam Schroder made him the first wheelchair player, in any division, to win seven straight singles titles at any one Grand Slam tournament.

It was his 12th major singles title, Alcott also a winner of eight titles at that level in doubles.

Originally scheduled to be played on Rod Laver Arena, the final was moved to Margaret Court Arena as the men’s singles quarterfinal between Rafael Nadal and Stefanos Tsitsipas extended to a fifth set.

Taking to the court at 11.20pm, Alcott was initially outplayed by his Dutch opponent.

But that Australian quickly recovered from dropping serve in the opening game, later explaining that the schedule change was a factor in his unusually subdued beginning.

“I lost that first game and I was, like, ‘Oh no, I’m in trouble here’. Then I actually channelled that into the tennis ball,” said Alcott, who secured his comprehensive first-set lead in just 25 minutes.

Another one 🏆🇦🇺@DylanAlcott claims his SEVENTH #AusOpen Championship! 👏 #AO2021 pic.twitter.com/P5AphGDjxJ

After a heartbreaking loss to Schroder in the 2020 US Open final – his only loss in 20 matches contested last season – Alcott wasn’t allowing the world No.3 any hint of an opportunity on this occasion.

With Schroder serving, the opening game of the second set extended to four deuces; Alcott maintained momentum by seizing that game on his fourth break point opportunity.

Three games later, Alcott underlined his competitive intensity as he recovered from a 0-40 deficit on his own serve. Break points told a powerful story, the Australian winning six of 17 and Schroder converting just one of the six opportunities he created.

Alcott closed out the 63-minute match with 30 winners to 11 from Schroder, recording only 11 unforced errors.

Also a winner over Heath Davidson and Niels Vink in earlier singles matches this week in Melbourne, Alcott has lost only three matches since his Australian Open debut in 2014.

A strong mental outlook has helped that record, Alcott noting that sheer hard work is another element of his success that’s often underestimated.

“I think being really assured of who you are is an important trait that when push comes to shove,” said Alcott.

“You might know me as the radio guy and the guy (who) goes to festivals and me, this happy guy, but I also bust my ass five hours a day every single day when no-one is watching. When push comes to shove, that rises to the top.

“I think my mental game and how hard I work is probably the two things that I trust the most, and it leaves me in good stead.”

Alcott would dearly love to add to the lofty achievements throughout 2021, the Paralympics a particular focus for the defending gold medalist in singles and doubles.

I’ve always said I do my best work after midnight.

“The Paralympics is like the Holy Grail,” said Alcott, relating he was “gutted” with the postponement of the 2020 Paralympics last season. “I really hope we get the opportunity to play.”

And a challenge for an eighth Australian Open singles title could well be on the cards, despite repeated hinting there could be a timeframe on his storied tennis career.

“I want to do all kinds of stuff. And it’s hard to do it all at once, ” admitted the prolific champion, who also has varied media commitments, a personal foundation and carefully manages the two companies he’s established.

“At the moment I’ve still got the passion to play tennis. We’ll see what happens.”