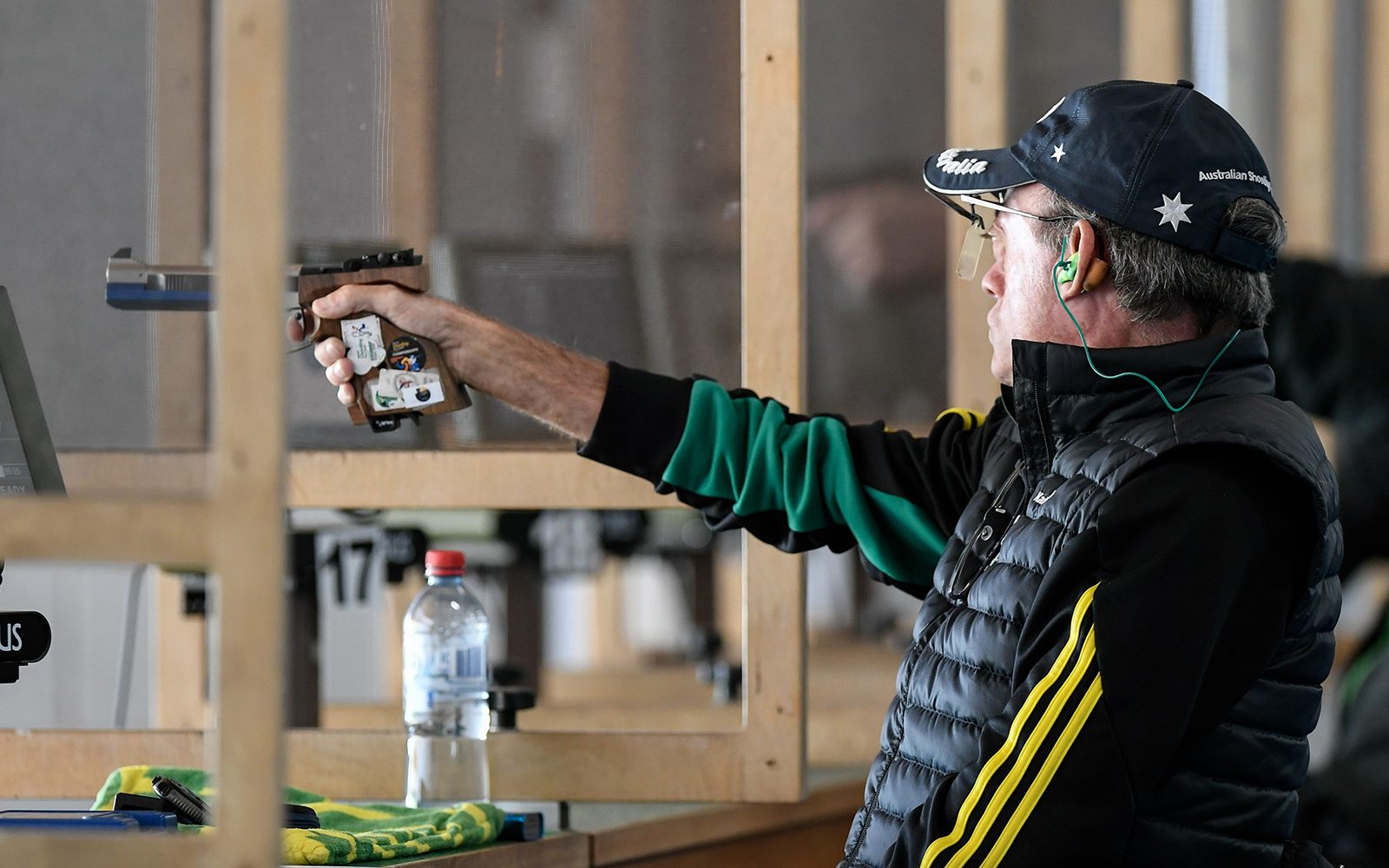 For the Bundaberg local, there is nothing better than trundling out onto the water with some mates, casting a line and solving the world’s problems while waiting for a bite or two.

Given his passion for fishing, you can understand what a massive decision it was eight years ago when he sold his beloved tinny to scrape up enough cash to have a crack at the world of Para-shooting as a 25m Sports Pistol athlete.

At 47 years of age at the time, Pitt was no spring chicken and it took another Bundaberg local, 15-year old wheelchair racer Rheed McCracken, to show him the way when he won silver and bronze medals on the track at the 2012 London Paralympic Games.

The Pitt and McCracken families knew each other well when serving on the local Fairymead Swimming Club committee, while Pitt swam with McCracken mother Samantha.

“When I watched Rheed at the 2012 Paralympics, that’s when I thought if a 15–year old kid can go all around the world and do what he’s doing, I need to man up a bit and have a go at this. That’s when the penny dropped,” said Pitt.

To understand how Pitt reached this life-changing point of his life, we need to go back to his early years.

Growing up on a 69 hectare cane farm with his two older brothers Russell and Bruce, and older sister Suellen, Pitt loved playing sport and was a particularly fine swimmer.

Then in early 1975, a few months short of his 10th birthday, Pitt’s times in the pool began to slow, training was getting harder, and where he once leapt up the wall at the end of a race, it was a real struggle to climb up the ladder at the side of the pool.

After months of medical tests and periods in hospital, Pitt was diagnosed with an autoimmune condition called dermatomyositis. Fatal to many, the disease eventually burnt itself out but left Pitt in a wheelchair.

Fast forward 35 years and Pitt only tried target pistol shooting at the urging of a couple of wheelchair mates.

“They nagged me and nagged me to come and try and, eventually after a month, I gave in and went out to the range with them. I was instantly hooked, and, to a point, I still am,” he said.

Where it took most athletes 4-8 years to be competitive internationally, it took Pitt just 18 months.

During an Oz Cup competition in 2012, Pitt was pulled aside for a chat by former Australian Commonwealth Games pistol athlete, Peter Heuke, after an impressive performance where he scored a world class score of 572.

“He took me out the back of the range and said, ‘do you know what you have just done?’ I said, ‘I shot a pretty good score I think’. He said, ‘you don’t realise that you have just opened up a whole world of possibility’.

“I said, ‘what are you talking about?’. He said, ’that’s a very competitive score and you have the ability to go as far as you want.’

“Then I started to think and started to investigate scores at World Cups, and I thought geez, I can do this, but I can’t afford to do the domestic travels – the competitions I had to do. So, I chewed on it for nearly nine months and I decided to have a go.

“So, I sold my little tinny. I got four grand for it. It got me two trips to Sydney and a case of ammo,” he added.

On his first trip to Sydney, Pitt needed a score of 560 to make the National Para Shooting squad but was left shattered when he fell an agonising three points short of the mark.

“560 was the benchmark score and I thought that would be a walk in the park,” Pitt recalled.

But the former National High Performance Coach for Athletes with a Disability, Miroslav Sipek, recognised his ability and invited him onto the squad despite missing the target score.

Then in 2013, the world of shooting opened up when he took his first overseas trip when representing Australia at the International Paralympic Committee (IPC) World Cup competition in Poland and, later, flew to Thailand for another IPC World Cup.

In 2014, he captured his first international medal in Sports Pistol when runner-up at the IPC World Cup competition in Fort Benning, USA.

His passport saw additional entry stamps to Croatia, Germany and the UAE before attending the 2016 Rio Paralympic Games with the Australian team.

“Without shooting, I would have been lucky to actually leave the state. Shooting has opened up a whole world to me. I think about it all the time what it has given me,” he said.

While the world’s borders have opened for Pitt, he is not a fan of long-haul travel.

“I still dislike the long distance travel, but I now know what to expect and I tolerate it a lot more. It is very tiring and uncomfortable,” he said.

Pitt has fond memories of the Rio Paralympics and came within a whisker of returning home with a bronze medal in the Mixed Sports Pistol SH1 event.

During qualification, Pitt was languishing in 24th position and facing elimination after the precision round but rocketed up to seventh and a place in the final after a splendid rapid fire round of shots.

In the final, Pitt had to win a shoot-off to reach the bronze medal match which he ultimately lost to Korea’s Lee Ju-hee.

“Rio was an awesome experience. Straight away I decided I’ll have another go at this. I thought it was unbelievable, especially going into that stadium for the Opening Ceremony. The hair on the back of my neck stood up. I’ll never forget that one,” he said.

The Tokyo Paralympic Games next year is firmly in Pitt’s sights and he has yet to claim a quota to be eligible for Australian team selection.

The Queensland Academy of Sport athlete was to travel to Peru last May to try and claim a quota, but the global COVID-19 outbreak has seen that competition postponed until May next year, if travel restrictions are lifted.

He had an opportunity to claim a quota at the Oceania Championships in Sydney last October but didn’t convert the chance.

“That was extremely disappointing. It was that expectation. Not keeping it simple, getting ahead of myself and then basically a string of poor shots and I started to panic a bit. Two poor strings and it’s just chaos in my head,” he lamented.

While the international shooting calendar waits finalisation, Pitt continues to conduct dry firing at home and live firing at the Bundaberg Pistol Club range. Quality rather than quantity is now his training regime.

And fishing is very much part of the downtime away from training where he and his cousin Lex Roberts hop into their polycraft for what he calls ‘an outing’.

With the world turned upside down because of COVID-19, the pandemic has halted any retirement plans.

“One thing I’ve learned from this COVID thing is that I need shooting. I was toying with the idea of Tokyo, and that’s it,” he said.

“But over the last few months I’ve decided to keep on going until they kick me out of the door as long as I am competitive and shooting well enough to be on the squad and not embarrass myself,” he added.

And that means fishing for more medals on the international stage.