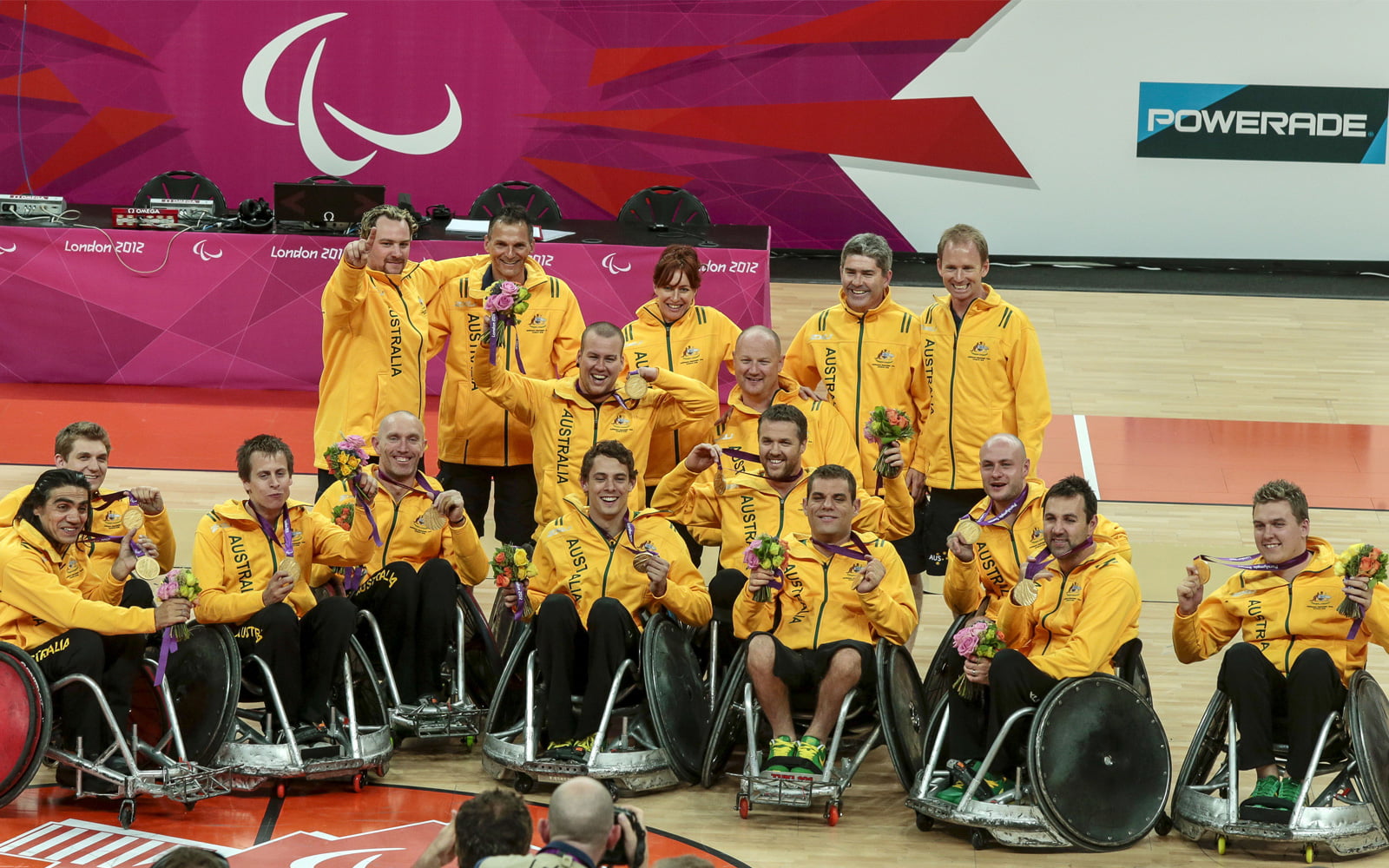 Before their shock silver medal at the 2018 World Championships, the Australian wheelchair rugby team had enjoyed a stunning six-year reign of dominance at major tournaments. Where did it begin? The London 2012 Paralympic Games.

As two-time Paralympic silver medallists from Sydney and Beijing, the Steelers had suffered heartache and disappointment for over a decade when they arrived in the English capital to contest the team’s fifth Paralympic Games. Experienced stars Ryan Scott, Nazim Erdem and Ryley Batt knew the pain well – Greg Smith and Cam Carr too. They had come agonisingly close to that elusive Paralympic gold in 2008, and had not committed to another four years of sacrifices to feel it again.

But this time around, gold wasn’t the Steelers’ only goal. They also had grand plans to win every quarter of every game they played.

“It came up in one of our first training sessions in London,” recalled Smith, who was Australia’s Opening Ceremony flag-bearer. “Brad [Dubberley, Head Coach] was talking us through what we needed to do to win, and one of the guys said, ‘If we win every quarter, we win every game’. And we all kind of stopped, and said, ‘You know what, that’s right! Every quarter, every game’. It all felt very profound at the time.”

In the preliminary rounds, Australia met Canada, Sweden and Belgium. They won every quarter, every game. Tick, tick, tick. Japan in the semis. Tick.

Canada in the gold medal game. Here we go.

Scott, Erdem, Batt, Smith, Carr. They had seen it all before. But it was new territory for the six debutants: Chris Bond, Josh Hose, Jason Lees, Andrew Harrison, Cody Meakin and Ben Newton.

There was a scrimmage at the tip-off, but Batt did what he does best and found the ball, crossing for the first point of the game. Points two, three and four soon followed. By the close of the first quarter, the Australians had pulled out to a seven-point lead. One quarter down, three to go.

“The thing that surprised me most about London was just how dominant we were,” Smith said. “We didn’t expect to win by as much as we did … I think our winning average was something like 13 goals, it was just unbelievable. It still sort of blows me away today.”

And on cue, the Steelers were up by 13 at half-time. 14 at three-quarter-time. One to go. They had all but secured their gold medal, but the Steelers’ work was not done. Every quarter, every game.

The fourth-quarter commenced and Australia crossed for one. Canada returned fire. Goal for Australia. Goal for Canada. With 31 seconds remaining on the clock, the Steelers were tied with their North American rivals at 15 points apiece for the quarter.

Carr with the intercept. Carr passes to Batt. Batt looks for the line. Batt’s locked up in the Canadian defence. Three seconds on the clock. Batt passes to Smith. One second. Smith rolls backwards over the line. Game.

Immediately after the match, Erdem had realised the magnitude of the Steelers’ achievement.

“One of the major goals that we had was to win each quarter and we did that. We only just did that in the last second of that game. We were even … and then Greg Smith scored that last point right on the line, right on the buzzer. I can’t wish for anything else.”

Scott, who will go down in history as one of the best 0.5-pointers in the game, said: “You dream of being in this position for years … Brad, Naz, Ryley … I’ve played with those guys for over 10 years now, and it’s just everything to us. We’ve worked so hard and had so many disappointing times, so to finally get that medal is just amazing.”

Unlike Scott, this wasn’t Smith’s first taste of Paralympic gold – he was a three-time champion in Para-athletics in Sydney. But the feeling was unlike any he had experienced more than a decade earlier.

“You start somewhere and hopefully, you progress, but not all players actually make it all the way through to the Paralympic Games, through to the gold medal game, onto the top of the Paralympic podium. But all of them had a massive part to play in getting us to that point; that gold was as much ours as it was theirs.”

The Steelers defeated Canada 66-51 to be crowned Paralympics Australia’s Team of the Year for 2012.