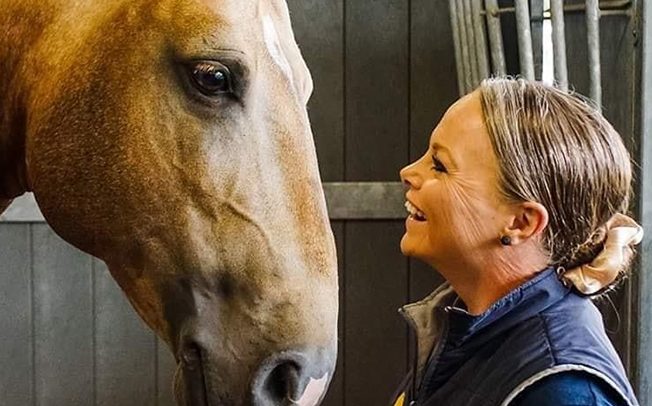 Victoria Davies and her stallion Celere have been named the inaugural series champions of the Equestrian Life Para-dressage Leader Board.

Equestrian Australia, in consultation with riders, last year introduced a new Para-equestrian initiative to recognise and support Australian athletes throughout the competition season.

Incredibly, Davies led the competition from the very beginning.

“I started off strong, but then Celere needed to have a few months off after Brisbane because he just wasn’t feeling his best, so we decided we would look after him now and that we would come out in 2020 and give it our all for the last two qualifiers. He is a Lusitano too, so I am really proud, really proud, that we have still come out on top.”

What makes this achievement even more impressive is that even with Davies’ daily pain management for rheumatoid arthritis, she does all the work with the horses herself.

“I ride the horses myself. Celere, he is very one-on-one and he only likes me riding him. We have a really strong connection, but I also have the eyes of my coach Alycia [Targa] on us, and it has really upped our game a bit.”

The Equestrian Life Para-dressage Leader Board was created to recognise and encourage participation in both national and international competitions.

“I think these types of leader boards are helpful. It also gives the riders the chance to go to clubs and say, ‘Would you mind having our Para-equestrian tests?’ Some clubs are really supportive of that, every one that I have come across – whether it be Shoalhaven Dressage, Sydney Dressage, Hawkesbury, Clarendon – they have all been very supportive of the Paras.”

And Davies didn’t stop there.

“To get the horses out for experience, there are a lot more open [able-bodied] competitions, so I do compete open,” she said. “With Celere, I was pretty much going out every weekend, which really helped with his relaxation, and we were competing up to medium. We even competed at Willinga Park last year, and Wallaby Hill, which was really fun. Before major qualifier events though, I have to focus on the walk and the trot, so I don’t like interfering with my training by going out and doing medium-level during qualification periods.”

In addition to Davies taking out the overall Equestrian Life Para-dressage Leader Board title, other awards have also been presented in line with the new initiative.