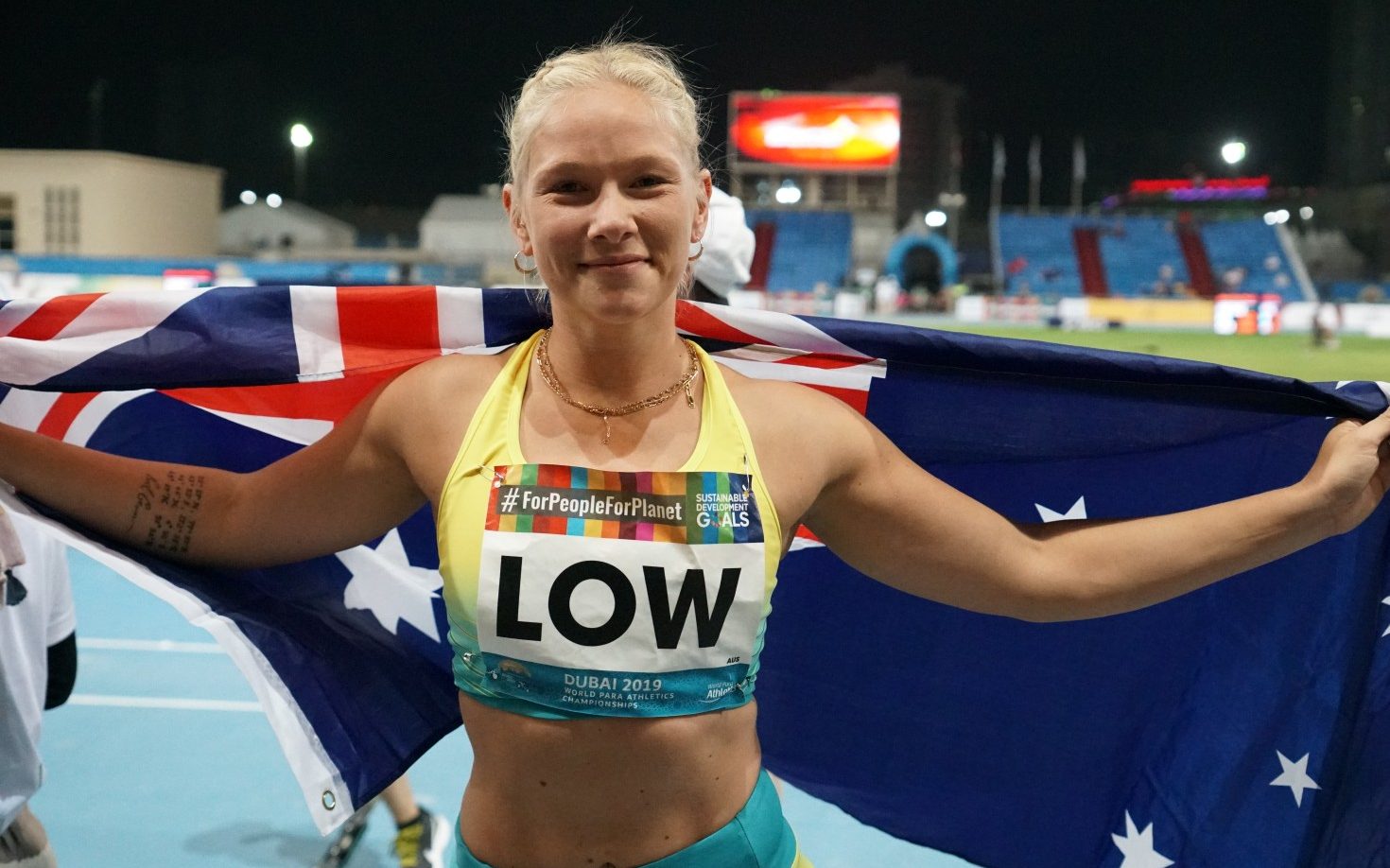 Madison de Rozario and Vanessa Low headed a ‘girl power’ night by the Australian team at the 2019 World Para-athletics Championships in Dubai, UAE.

Winning gold medals in the 800m T53 and long jump T61-63 respectively, made them the first women on the Australian team to stand on top of the podium after six days of competition. Another two bronze by Aussie women completed the gender-bender on Tuesday (12 November) night.

It also put Australia firmly back in the top five of the medal table with 15 overall with six gold, four silver and five bronze, leapfrogging Germany (five gold) and Russia (four).

Ironically, Low’s previous world and Paralympic medals have all been won under the German flag. But she is married to Australian Paralympian Scott Reardon, and received her Australian citizenship in July 2017.

So this is her first medal for her new country.

“Bringing home the gold for my new country was really amazing,” Low said, adding that she took a while to get accustomed to the harder runway, compared to the surface on the stadium’s warm-up track.

“It was a very tough win tonight. I really had to fight and dig deep. Unfortunately, I couldn’t do my personal best and show what I’m capable of, but it was really great to get the win.”

Low’s fifth jump of 4.68m was her best – below her world record for double leg amputees of 5.05m, but still 27cm further than silver medallist Gitta Haenen from Belgium.

It was also the 61st medal at a major event (World Championships, Paralympic Games or Commonwealth Games) for Ukraine-born Iryna Dvoskina, who began coaching Australian athletes in 2003, and is looking after Low and Reardon’s campaigns for the Tokyo 2020 Paralympic Games.

For de Rozario, her first medal at a World Championships was in the women’s 800m T53 in 2015, and she duplicated that tonight, four years later.

“I felt a little stronger than I thought I would be,” said de Rozario, who collected the 1500m silver on Monday night with a powerhouse sprint down the home straight.

Tonight, she took the lead at the bell and held off Switzerland’s Catherine Debrunner and China’s Zhou Hongzhuan to win in 1:52.15 – bettering’s Zhou’s winning time at the 2017 World Championships to deny her back-to-back gold medals.

“The 800m is a tricky one, as you don’t have a lot of time and you sometimes second-guess your decisions. But Louise [Sauvage, de Rozario’s coach] told me to commit, no matter what decision I made.

“I saw a gap which was a little earlier in the kick than I would normally do, but I committed and finished strong.”

The final was also Angie Ballard’s third and last final, finishing eighth in 2:05.16. She placed sixth in both the 100m and 400m finals earlier in the nine-day program.

The two other medals won on day six also went to women, with Eliza Ault-Connell and Rhiannon Clarke both winning bronze, in the 400m T54 and 100m T38 respectively.

Ault-Connell says she’s “finally getting the hang of it” – wheelchair racing at the top level after a break of 12 years to start a family.

Ault-Connell’s last World Championships medal for Australia was back in 2006 in Assen, the Netherlands.

“I am relieved, absolutely,” Ault-Connell said. “Finally, this morning, I started to feel my groove in my racing again. Coming back to a big international comp, it took me a few races to get here.”

Clarke is making her World Championships debut in Dubai, and did it in the best way possible today by winning bronze with a personal best of 12.94.

“I’m so stoked. I really can’t believe it. I was so nervous in the lead-up,” 17-year-old Clarke said.

Teammate Ella Pardy finished fifth in the final in 13.34.

In other results, Samuel Carter once again finished one spot shy of the medals with fourth in the men’s 400m T54 final in 48.04. His heat time of 47.48 would have won him bronze.

“Honestly, I’m ranked 10th in the world currently, so that’s a significant improvement for me in a 400m,” Carter said.

Jake Lappin finished fifth in this morning’s heats (48.61) and did not qualify for the final.