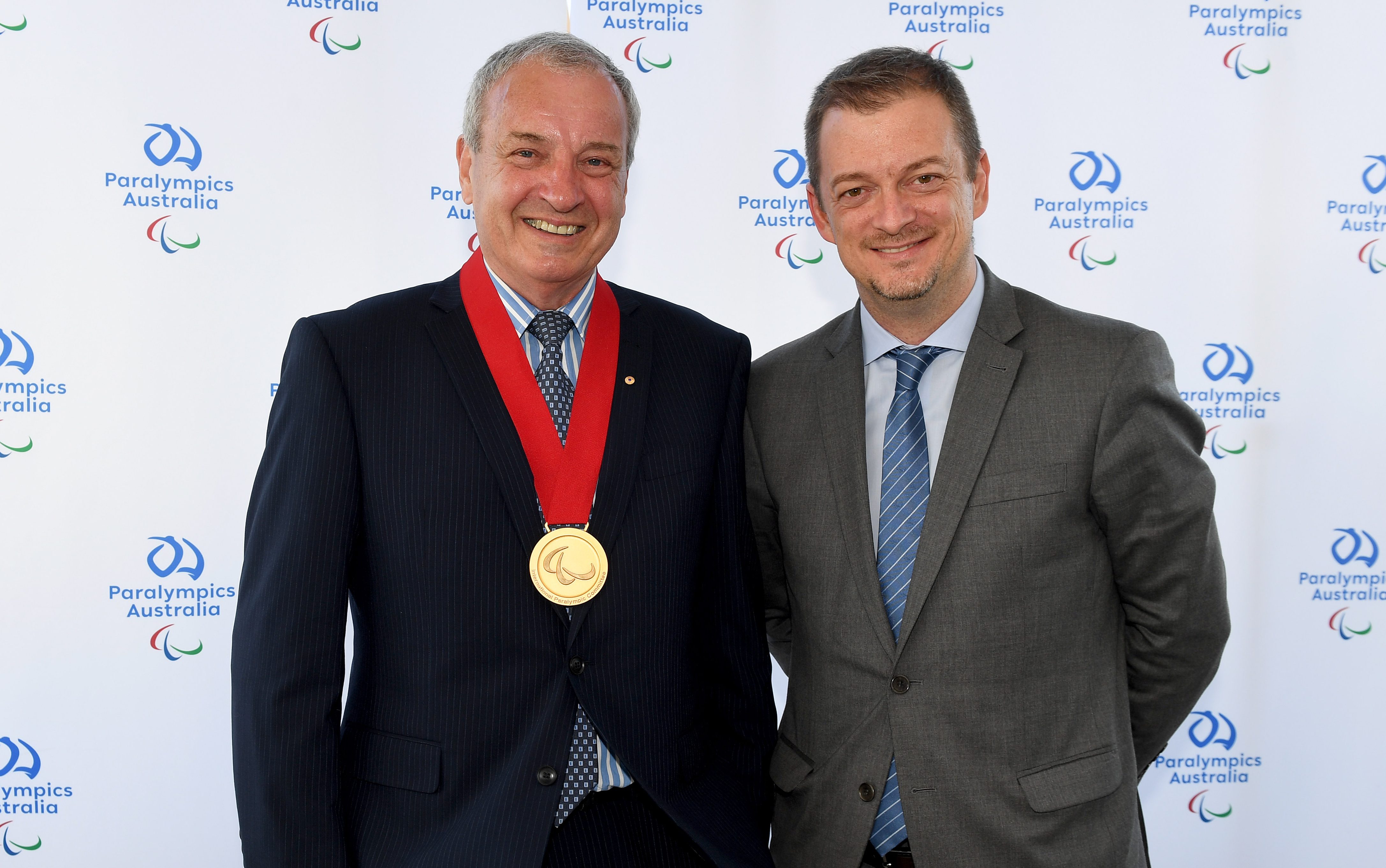 The most influential administrator in the history of Australian Paralympic sport has received the highest international honour, with Greg Hartung AO today bestowed with the International Paralympic Committee’s (IPC) Paralympic Order.

Andrew Parsons, President of the IPC, made the presentation to Hartung at a special ceremony in Sydney, NSW.

Serving as President of Paralympics Australia, then known as the Australian Paralympic Committee, from 1997-2013, Hartung made a monumental contribution to the Paralympic movement domestically and internationally by increasing support and respect for athletes with impairments.

He oversaw the Australian Team’s preparations for eight successful Paralympic Games, and during his tenure, Australia finished within the top five on the medal tally at each Summer Games. He also led the establishment of national programs in classification and talent identification which are now renowned worldwide, introduced a successful national Paralympic education program, and initiated programs to increase the representation of female athletes and athletes with higher levels of disability on Australian Paralympic Teams.

In addition, Hartung successfully lobbied for a more equitable level of federal sports funding for athletes with a disabilitym and drove the implementation of ‘mainstreaming’ partnerships with national sporting federations.

Parsons was proud to present the award to Hartung today, stating it was a humbling and honourable way to reconnect with his former colleague.

“On behalf of the International Paralympic Committee, I’d like to congratulate Greg once again on his achievements. It’s people like him that have ensured that our movement has continued to evolve into one of the most loved brands in world sport.”

Hartung said that while he was honoured to be recognised in this significant way by the IPC, he regarded the opportunity of working with and for Paralympic athletes and supporters as a privilege of the highest order and reward enough.

“In receiving this honour, I do so out of recognition and respect for the remarkable people I have worked with over many years, both in Australia and internationally,” Hartung said.

“Paralympism drills into your DNA, and it brings out the best in athletes, coaches, carers, support staff, families, administrators and, of course, the public.

“The Paralympic movement occupies a special place, a unique place, in the world of sport. Not only do athletes often redefine their lives through sport, but by extension, they have a profound impact on the lives of those who surround them or who watch them compete.

“It was a privilege for me to play a part in lifting the status and profile of Paralympic sport. I have been engaged in a multitude of roles in sport over a career spanning five decades. The Paralympic movement is different: you may leave it, but it never quite leaves you.”

Paralympics Australia’s President, Jock O’Callaghan, said the award was due recognition for the impact Hartung has made on the Paralympic movement over two decades.

“The IPC’s Paralympic Order is an incredible honour, but one certainly befitting for a career that has contributed so much to the success and growth of the Paralympic movement,” O’Callaghan said.

“He’s created a true legacy, and I know that athletes past and present are grateful for his vision for Paralympic sport. His commitment to improving the lives of those living with a disability through sport has been remarkable.”