Five rainbow jerseys for Australian Para-cyclists on day one 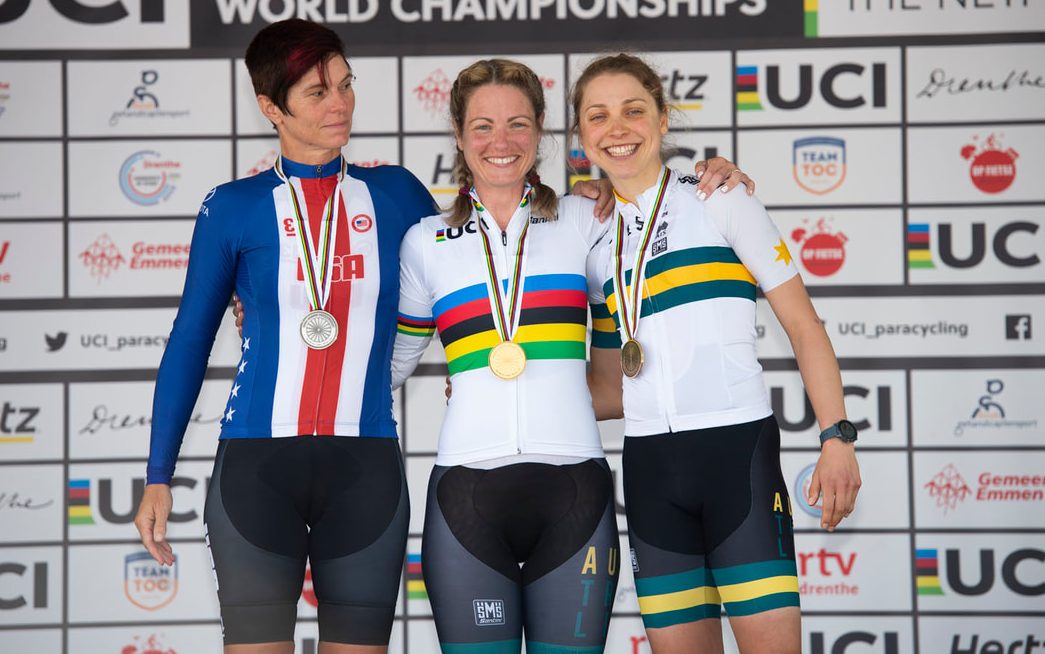 The sun shone on Team Australia on the opening day of the 2019 Union Cycliste Internationale (UCI) Para-cycling Road World Championships in the Netherlands, with five world titles and two bronze medals won in the time trial.

Hicks celebrated his second world title of 2019 after soaring to victory in the men’s time trial C2, scorching the course in 28:24.55 to take the win in a strong 25-rider field.

“The road time trial has been the title I’ve been chasing for three years,” Hicks said. “My classification is always one of the biggest and closest, so to finally get the win, and do it by 22 seconds, is just unreal.”

“We knew it would all come down to hitting my projected power and speed numbers, which were daunting, since they were both higher than I’d ever ridden before. That’s what I love about racing though, pushing yourself farther than you ever felt you could, and in my opinion, that’s what it should take to win a World Championship.”

With one rainbow jersey in his suitcase and the road race to come on Saturday (14 September), Hicks is still looking for ways to improve as he chases Paralympic selection.

“Everyone on this team is looking towards Tokyo [the 2020 Paralympic Games], but the truth is, there is so much racing to be done between now and then, that a good performance now could still leave you short in a year’s time. So I’ll take some time to process and enjoy this, then it’s back home and straight back into building, so that Paralympic dream can become a reality.”

Petricola (C4), who covered the course in 30:55.57, finished 32 seconds ahead of reigning Paralympic champion Shawn Morelli (USA), and was able to share the podium with teammate Meg Lemon, who raced home in 32:23.64 to win bronze.

“I was honestly ecstatic to win,” Petricola said. “I’ve had a pretty tough prep with a lot of disruption, and I knew it would take a really good performance to win today. I’m glad that despite everything going on in the lead-up, I could get the result for the coaches and our team.”

“I’ve been really stubborn about wanting to improve on the road and do well there. It is amazing to think that this country [Netherlands] has delivered me my maiden world titles on both the track and the road – it will definitely always hold a special place in my heart as a result.”

With Petricola targeting selection for Tokyo 2020, the result provides a perfect platform from which to build.

“It is a really important measuring stick, in terms of where we are at in relation to the rest of the world ahead of Tokyo. It certainly gives us a great opportunity to see our strengths and weaknesses, and start to plot a strategy for training to make sure we maximise our achievements there next year. It is a really exciting time for our team – we are strong in terms of both performances on the bike, as well as our support off it.”

In a nail-biting final, Donohoe (C5) secured his maiden time trial world title by less than two seconds, averaging 47km per hour across the 32km course to clock 39:22.52 and dash the hopes of Dutch cyclist Daniel Abraham.

“I can’t quite believe it just yet,” Donohoe said. “It’s pretty surreal to me. I’ve been chasing the time trial gold for a few years now, and to snatch it by 1.7 seconds is just amazing.

“The course was pretty technical, with seven corners a lap for three laps. It was tough to find your rhythm for long periods of time.

“We had a plan to go out conservatively, because the back end of the race was really hurting people all day, and I was fortunate enough to keep some gas in the tank for the last 15km and come home really well.

“Being a year out from Tokyo, it was a good chance to test some different preparation and training methods, to see what works best and what doesn’t. There is definitely room for improvement in all areas, which fills me with confidence heading forward to next year.”

The win was the third rainbow jersey of 2019 for Donohoe after two world titles in the men’s individual pursuit C5 and men’s scratch race C5 at the Track World Championships. He will now turn his focus to Saturday’s road race, which he will enter as defending champion.

“It’s been a nice few months racing in Europe with ACA [the Australian Cycling Academy] and I think it’s been perfect preparation. Going back-to-back always feels harder, feels like a bit more pressure with that invisible target painted on you, but that’s part of the fun.”

In other results from day one, Kaitlyn Schurmann won bronze in the women’s time trial C1.