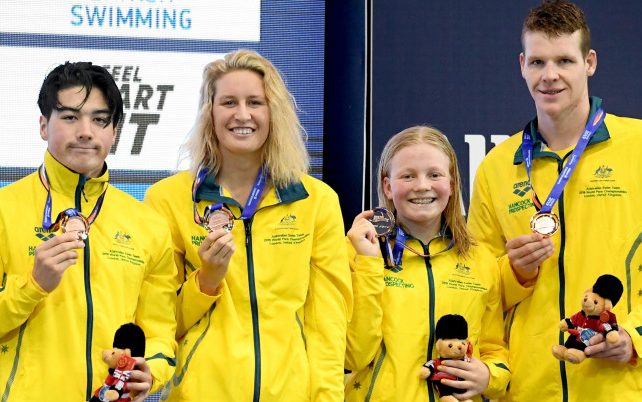 In the final event of the night, the quartet of Ricky Betar, Taylor Corry, Ruby Storm and Liam Schluter powered to the wall in 3:51.60 to grab bronze just ahead of Brazil (3:52.91), who were right on their tails for the back end of the race. Betar made a solid start for the Aussies, while Corry and Storm held strong in the middle and Schluter anchored the team home. For rookies Betar and Storm, as well as 19-year-old Schluter, this was their first World Championships medal.

“It was excellent,” Schluter said. “The team were awesome and were very fast in the pool. What an amazing night it’s been.”

Echoing Schluter’s excitement, Corry said she was proud to be part of the Dolphins team and represent her country.

“Being part of this team is an amazing feeling,” Corry said. “We all got our first medal tonight at the meet, and we’re so honoured to represent our country and every time we do, we try to make it proud.”

Earlier in the evening, Crothers collected his second bronze medal of the Championships, snatching third place in the men’s 100m freestyle S10. His time of 51.47 – only two one-hundredths of a second behind the silver medallist – was close to his personal best and is a testament to the hard work and commitment he’s showcased in the lead up to the event.

Such is his attitude to push himself and become the best athlete he can be, the 21-year-old couldn’t help but display a touch of disappointment post-race.

“Honestly, I am a bit disappointed with that swim,” Crothers said. “I haven’t come here to win medals and break records, I’ve come here to do the best that I can and put a strong time on the board.

“I’m in the best form of my life right now, so to not produce, it does kind of suck. But that’s the sport – sometimes all the cards will be in your favour and someone pulls out a royal flush, but you’ve just got to play the next hand.

“That’s going to be my focus for now – resetting and getting ready for the 4x100m relay at the end of the week, and then from there, reassessing what we need to do to get me to 49 seconds for Tokyo [the 2020 Paralympic Games].”

In the women’s 100m freestyle S10 final, Jasmine Greenwood – who is making her World Championships debut – placed fifth in a new personal best time of 1:02.30, while in the women’s 100m breaststroke SB13, Jenna Jones finished sixth in 1:23.44.

Ben Popham and Blake Cochrane returned to the pool to race in the men’s 400m freestyle S8. Having both already won medals this week – Popham, a silver, and Cochrane, a bronze – the duo fought hard in a fierce race that was dominated by those in lanes three and four. In the end, Popham placed fifth in a personal best time of 4:40.14, with Cochrane just behind in sixth (4:40.77).

After the fourth night of the competition, Australia sits 16th on the medal table, with one gold, four silver and six bronze.