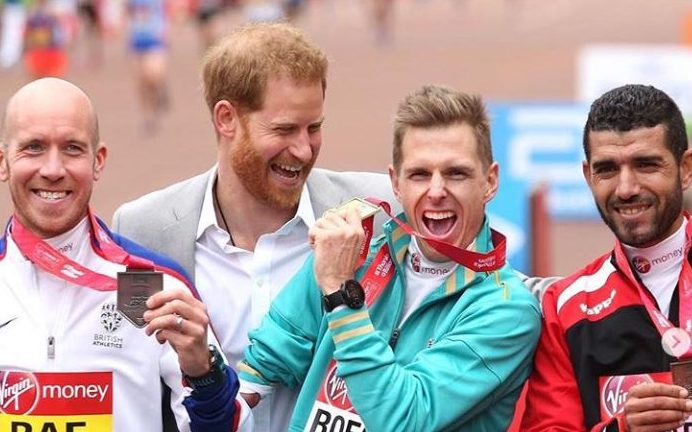 Michael Roeger claimed World Championship gold at the 2019 London Marathon on Sunday (28 April) as world records fell on the roads of the English capital.

It was a first world gold and stunning debut in London for Roeger who smashed the men’s T46 world record in only his second marathon, having made his debut over the 26.2-mile distance in Melbourne, Victoria, last October.

The 30-year-old was hampered by cramp in the closing stages of his marathon debut and it was not easy for him this time either – which made victory all the sweeter.

“I guess goal number one was to win and goal number two was to PB [personal best]. I did both those. There’s a lot to learn in the marathon, I missed two drinks stations which is crucial, but I’m very happy,” said the 30-year-old, who clocked 2:22:51.

“It’s only my second [marathon] so there’s a lot to work on, just getting the body stronger. The London Marathon, the IPC [International Paralympic Committee], they’ve put on a great event and I feel very grateful to be here. The crowd the whole way was unreal – it’s giving me goose bumps just thinking about it.”

Roeger only turned to distance running last season, having competed for many years in middle-distance races – he won bronze in the men’s 1,500m T46 at the Rio 2016 Paralympic Games, as well as three world bronze medals over the distance. Now he plans to focus his attention solely on the roads and the men’s marathon T46 Paralympic title next year.

“It’s special. I did the job, got my first global gold, and it’s a great stepping stone towards Tokyo 2020 [the Paralympic Games],” he added.

By the International Paralympic Committee
Posted: 29/04/2019