Devils get underway against Japan 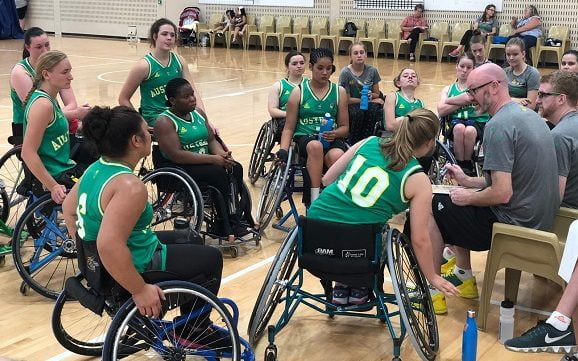 The Australian Devils are midway through an international series against Japan that will help determine the team to compete at the 2019 IWBF U25 Women’s Wheelchair Basketball World Championships in May.

Hosting Japan for a six-game series at Basketball Australia’s Centre of Excellence, the Devils own a 1-2 record so far, but the week is about more than scoreboard results.

“This is a fantastic opportunity for the Devils to come together and play against a quality opponent in preparation for the World Championships,” said Leigh Gooding, Head of Wheelchair Basketball.

“Having a visiting international junior team come to Australia is a nice change and is very advantageous for the developing squad.”

The Devils started the week in style, defeating Japan by two points. They outscored the visitors 23-13 across the second and third quarters but had to hold off a late charge as Japan scored the last nine points of the game in the final two minutes.

Japan were able to bring the momentum from the fourth quarter into the following day, bouncing back with a 69-28 win as they held the Devils to 26 per cent shooting.

With a 16-player squad, Head Coach Stephen Charlton brought in Lauren Hardbottle and Bernie Petersen for some crucial game time while Lindsay and Cronje paced the Devils in scoring with 18 combined points.

Later that day, the teams met again with the Devils getting off to a hot start, leading 24-12 at quarter-time.

Japan stuck close with them though, narrowing the deficit in the next two quarters to just four at the final change, but Lindsay was able to hold them off with two early buckets in the fourth term.

Despite the best efforts of Lindsay (24 points, five steals) and Shadwell (12 points, 14 rebounds, three blocks), the visitors scored the last nine points of the game for a 51-46 win. Victoria Simpson and Sarah King also played some solid minutes.