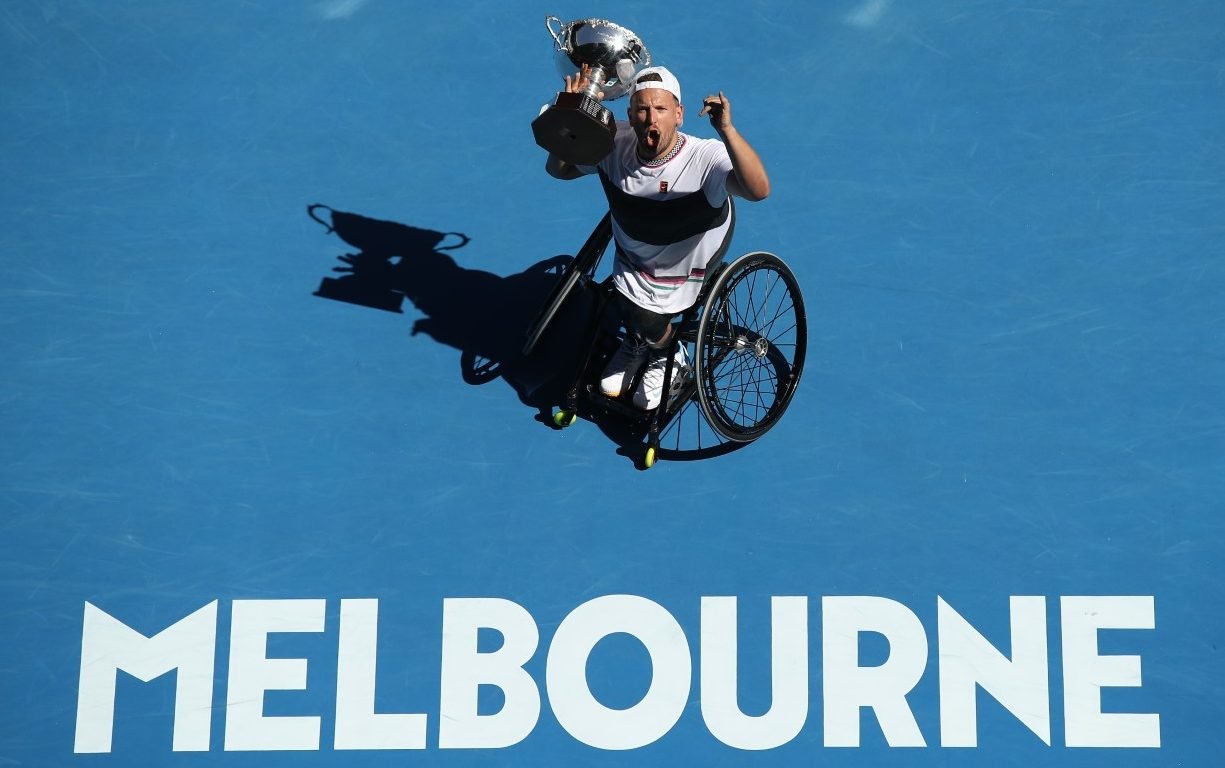 Tears streamed down the face of wheelchair tennis ace Dylan Alcott as he was presented his fifth consecutive Australian Open trophy on Saturday (26 January).

In a one hour and 41 minute battle against world No. 2 David Wagner (USA), Alcott prevailed in a straight-sets victory 6-4, 7-6.

While the win was not new territory for the home crowd favourite, Alcott said it was the sweetest one yet.

“That win meant the most to me because someone wrote a funny tweet [to me], I read it, ‘If you put yourself out there, it puts more pressure on you’. It really does,” Alcott said.

“To broadcast it live to the world, never been done in a final, that’s huge for the movement of Para-sport, everything that I believe in.”

Last night’s Australian Open final was the first quad singles Grand Slam final in history broadcast live to homes in Australia and in nations across the world.

“I used to lie in bed thinking, ‘This sucks. Why don’t I see anybody like me?’ This used to eat me up. Whatever I’m good at, I want to make it. That’s what I used to tell myself. That’s the definition of making it, broadcasting that to the world.”

Although the final score reflects that Alcott was the clear champion, his competition was cut out for him, with Wagner pushing him hard in each set.

And while the second set tiebreaker had the 5,000-strong crowd on the edge of their seats, Alcott said he knew he had enough experience competing against Wagner to get the job done.

“Every time I hit a slice backhand to his backhand, I’m like, ‘What am I doing that for?’ Next shot, same thing. That’s what happens when you’re in the final of a Grand Slam.

“In the tiebreak, my box told me to just take a bit more time.

With Alcott’s profile growing fast due to prominent sponsorship and broadcasting deals, he said the target on his back was bigger than ever.

“It’s a much bigger target the more you pump yourself up, put yourself out there. As I read in an article, the most famous person at the Australian Open is not who you think,” Alcott said, referring to an article that was published about him in The New York Times.

“Just reading that title, the way it was written, it’s almost valid. I can’t believe that. You go out in the public, thousands of people gather around for a photo. I can’t believe it’s happened.

“I’m the lucky one who has it at the moment. The next generation of young [Para-athletes], other sports, they deserve the same thing.

“It means the world to me to be able to cut through, break that glass ceiling. Hopefully it flows on for years to come and this becomes the norm.

“It adds to the pressure. You put that on yourself. People say, ‘Why do you do all this broadcasting?’ I was tired, I felt bad at the start of the week. You have to hustle to get where you want. I’m so glad I didn’t stuff it up, was able to win.”

With a heavy schedule over the Australian summer, Alcott will now take a short break from wheelchair tennis before he begins training for the next Grand Slams, Wimbledon and Roland-Garros.

And after that, qualifying for the Tokyo 2020 Paralympic Games will be on his agenda.

“I want to go to Tokyo 2020, hopefully win a few more gold medals and then I’ll reassess my life after that.”