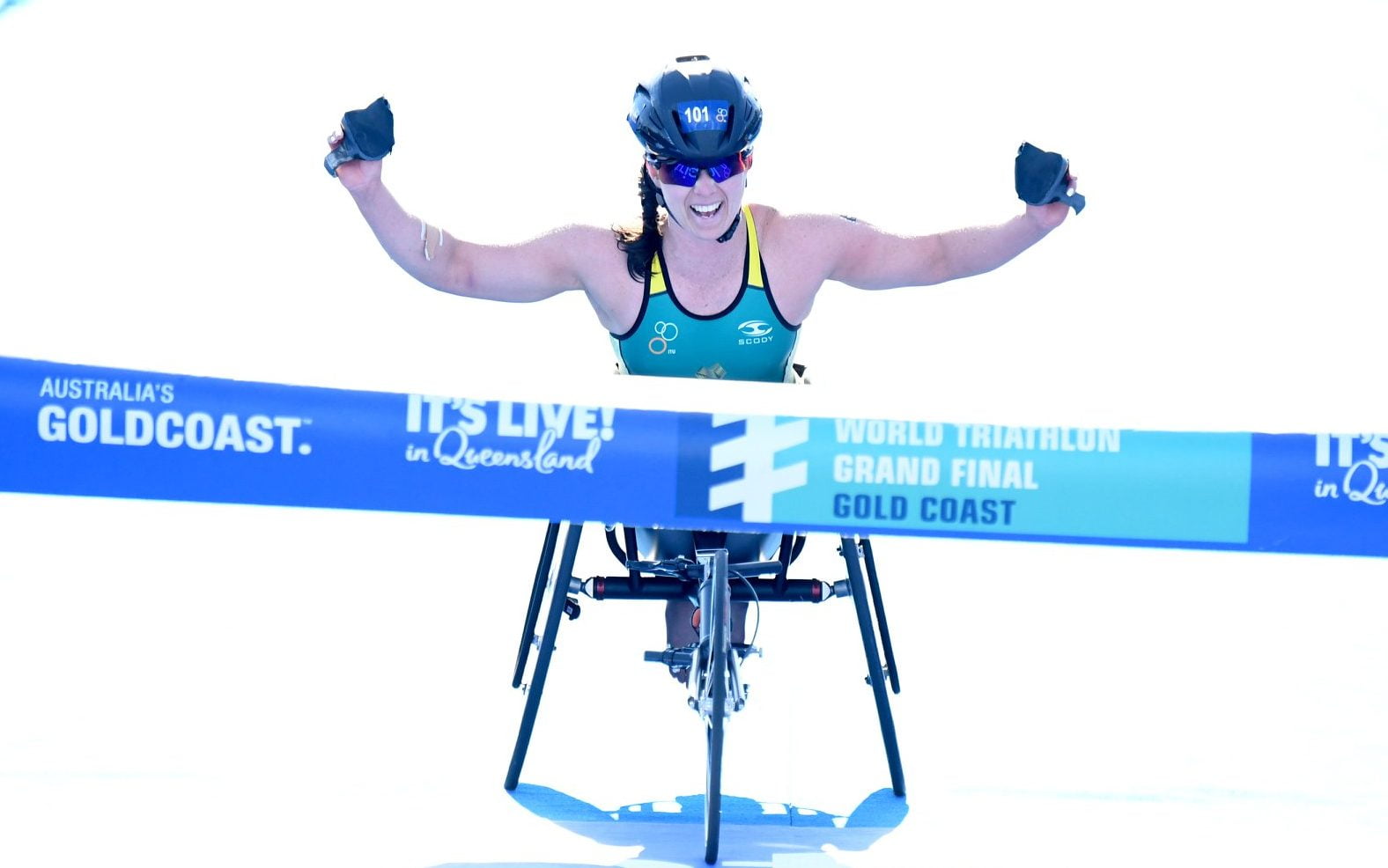 Tapp successfully defended her world title from Rotterdam, Netherlands, last year with an emphatic victory over Japan’s Wakako Tsuchida and fellow Aussie Lauren Parker, who had her own triumphant return from spinal surgery to take the bronze.

They were joined on the podium by two-time world champion Sally Pilbeam, who powered home to silver in the women’s PTS4, with bronze also to Paralympic champion Katie Kelly.

But it was 27-year-old ACT-based Queenslander Tapp, who became a paraplegic after a campdrafting accident in 2011, and who underwent surgeries 12 months ago and spent the next three months in rehabilitation, who was a deserved gold medallist.

The Commonwealth Games silver medallist in the recently added PTWC category for the Tokyo 2020 Paralympic Games, crossed the finish line to win gold, pain-free and ready to tackle the challenge to finally become a Paralympian.

“I feel like I’m the athlete I wanted to get back to being post surgery, and my coaches believed in me more than I could,” said Tapp, whose family surprised her and swamped her with congratulations after her win.

“This is the race I knew I wanted to hit. I didn’t think the road to recovery would be this turbulent.

“It has made me a better athlete, and where I am now, and has really helped me focus. I’m looking forward to 2020.”

“The family can come and enjoy pancakes with me, which is all I’ve been wanting for this past week. There will be nothing left [when I am done].”

Parker, who placed third at the Commonwealth Games, admitted she was worried about competing post surgery.

“But I was determined and happy to be here, even though that was so tough, so much tougher than the Commonwealth Games,” said the 24-year-old from Newcastle, NSW.

“I haven’t had the best preparation after surgery five weeks ago, and my right arm is that much weaker than my left, so I’m stoked to come away with another bronze.

“The bike is normally my strongest leg and we can get away from the other girls, but that didn’t happen today. I went as hard as I could, and I can’t ask for anything more.

“I’m looking forward to making a full recovery over the next few months so I can build up my strength.

“There is always improvement to come and I am definitely looking forward to the World Championships next year.”

Kelly, too, had battled injury in the lead-up, managing a stressed left metatarsal, which she overcame to get to the start line – but she was full of praise for Spain’s Susana Rodriguez and Great Britain’s Alison Patrick, who proved too strong on the day.

“I knew those girls were getting stronger; they have been competing all year, and that really counts on days like today, but big congrats to them both for great races,” said Kelly.

“And congrats to my first-up guide Holly – she is just a champion. To finish that race is a triumph in itself.

“I have been here twice and haven’t finished it, so I’m happy with that on that level.

“We took it really slow with the recovery and preparation, with the focus all about 2020 [for the Paralympic Games].

“This year has been about building up my strength and conditioning. I had a fantastic block with coach Dan Atkins, but after today, it just shows you what you have to do.”

“I had a great swim, and I just can’t match it with those girls with two arms, but that’s ok. I pulled back some time on the bike and the run, and I’m really, really happy with how I raced today.”