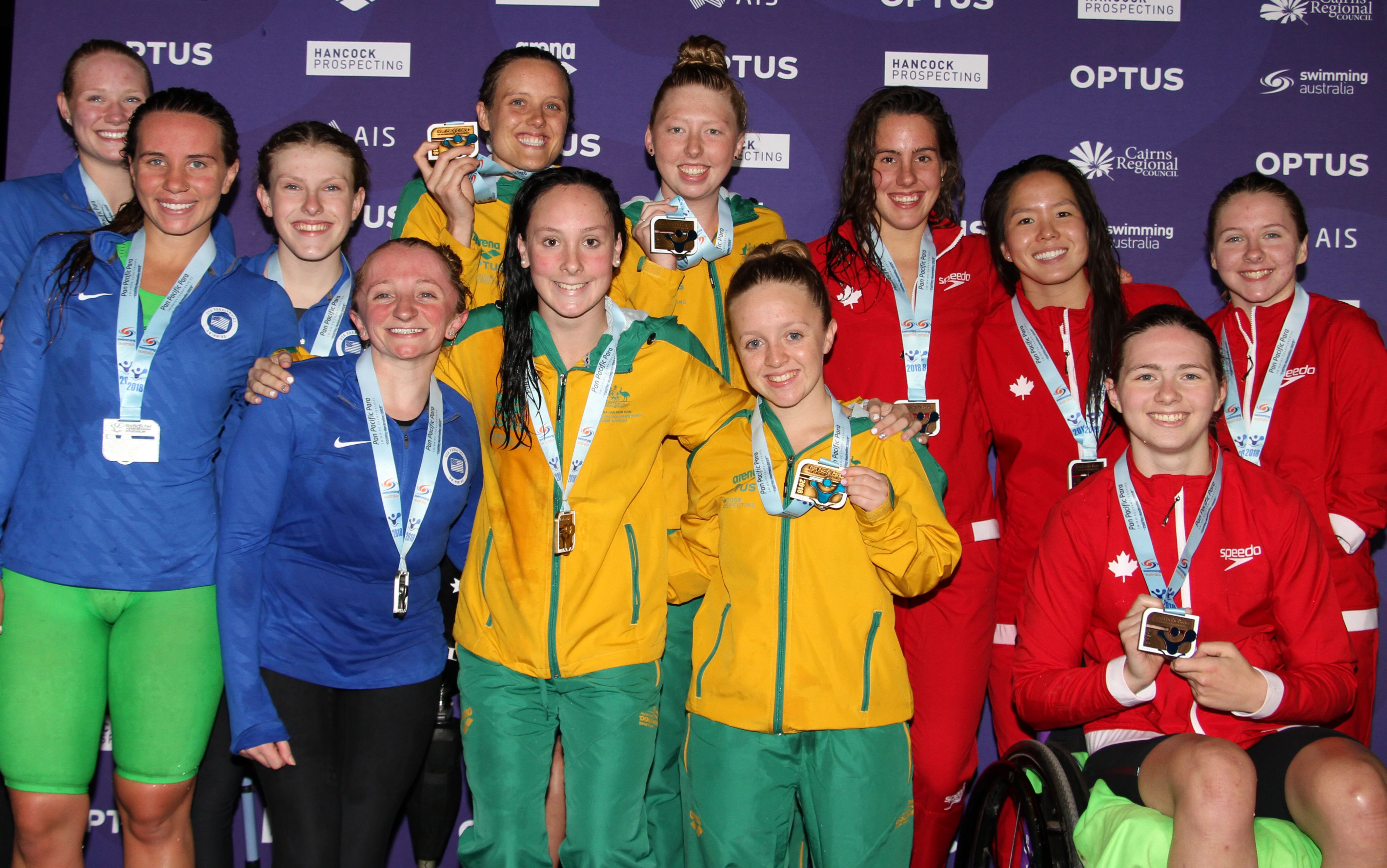 The Australian Dolphins have continued to post personal best times and win more gold on night three of the Para Pan Pacific Swimming Championships at the Tobruk Memorial Pool in Cairns.

With teammates Grant and Lakeisha Patterson knocking up PBs, alongside Taylor Corry, Timothy Disken, Ben Popham and Jesse Aungles, the gold also continued to flow for a total medal haul now of 25 gold, 17 silver and 13 bronze.

The opening gold medal of the night for Australia went to Cairns local Grant ‘Scooter’ Patterson, continuing his strong form throughout the meet with another personal best swim.

“I don’t know what to say, it’s just amazing. I’ve been around for about 11 years now and to bring a 56.9 out is bloody brilliant… take a bow Carl,” said Patterson.

In one of the closest races of the night, 19-year-old Dolphin Lakeisha Patterson raced American star Jessica Long all the way to the wall in the women’s SM7 200m IM. Finishing just a shade behind Long for a silver medal, Patterson clocked a new personal best time of 2.41.52.

“Jess is an amazing competitor and friend and has been around for quite a while now so to be up and racing against her is quite special,” said Patterson.

“I haven’t raced her and some of the other countries since Rio, so it’s great to have the best in the world right here on home soil and it really does push me along.”

“For me I just had to come out and do my best race and I did a PB, the fastest I’ve ever done before, so I’ve got to be happy with that but next time I’ll definitely be looking at pipping her.”

In the women’s SM9 200m IM Madeleine Scott was the first to wall to take gold in a time of 2.40.38 while in the SM10 200m IM final, Katherine Downie took bronze in 2.33.95 behind Sophie Pascoe of New Zealand and Aurelie Rivard from Canada.  Aussie 13-year-old Jasmine Greenwood finished a strong fourth in 2.34.40.

The S14 women’s 200m IM saw Australia’s Taylor Corry lead all the way to take gold for Australia in a new personal best time of 2.37.42 with teammate Jaime-Lee Getson finishing fourth in 2.42.97.

The time was just a shade better than the previous 17-years Australian record held by Paralympic legend Matthew Cowdrey and one Hodge has had his eye on for a while.

“That race was really good. It was a PB by 2 seconds. I’m extremely happy. I went into the race not expecting nearly as much but I’m really happy with the result,” said Hodge.

“I went really fast in the heat, really close to my PB, and I was really happy to get under 2.18.40 which is Matt Cowdrey’s 17-years Australian record and to be able to finally get that, I’m stoked.”

“It’s just a great feeling. I’ve been chasing his records in each age group every year and this has been one that eluded me for the first half of this year and to finally get it, it’s been a great race.”

Hodge’s Dolphins teammate Timothy Disken took silver in the event in 2.20.90 while Matthew Levy won his second gold medal of the meet in the men’s 200m IM SM7 with a time of 2.35.08 and Aussie teammate Rohan Bright taking silver in 2.41.42.

The SM8 200m IM saw American Robert Griswold take it out hard and come home just a strong, covering the four laps 10 seconds faster than his heat time this morning, with Dolphin Jesse Aungles winning silver in a personal best 2.26.02 and Blake Cochrane picking up bronze in 2.33.08.

The final of event of the night saw the Australian 4x100m medley 34-point relay team of Ellie Cole, Tiffany Thomas-Kane, Paige Leonhardt and Lakeisha Patterson come from behind for gold over Team USA.

Going into the freestyle with a four second lead, USA swimmer McKenzie Coan an S7 almost held on to a fast finishing Patterson (S8) only to be passed in the last couple of metres with the Dolphins taking gold in 4.59.12, and the USA just a touch behind in 5.00.20.

The Pan Pacific Para Swimming Championships at the Tobruk Memorial Pool in Cairns will continue tomorrow morning from 10am, with all the heats action live online at www.swimming.org.au