Team co-captain Gourley gets so close once again 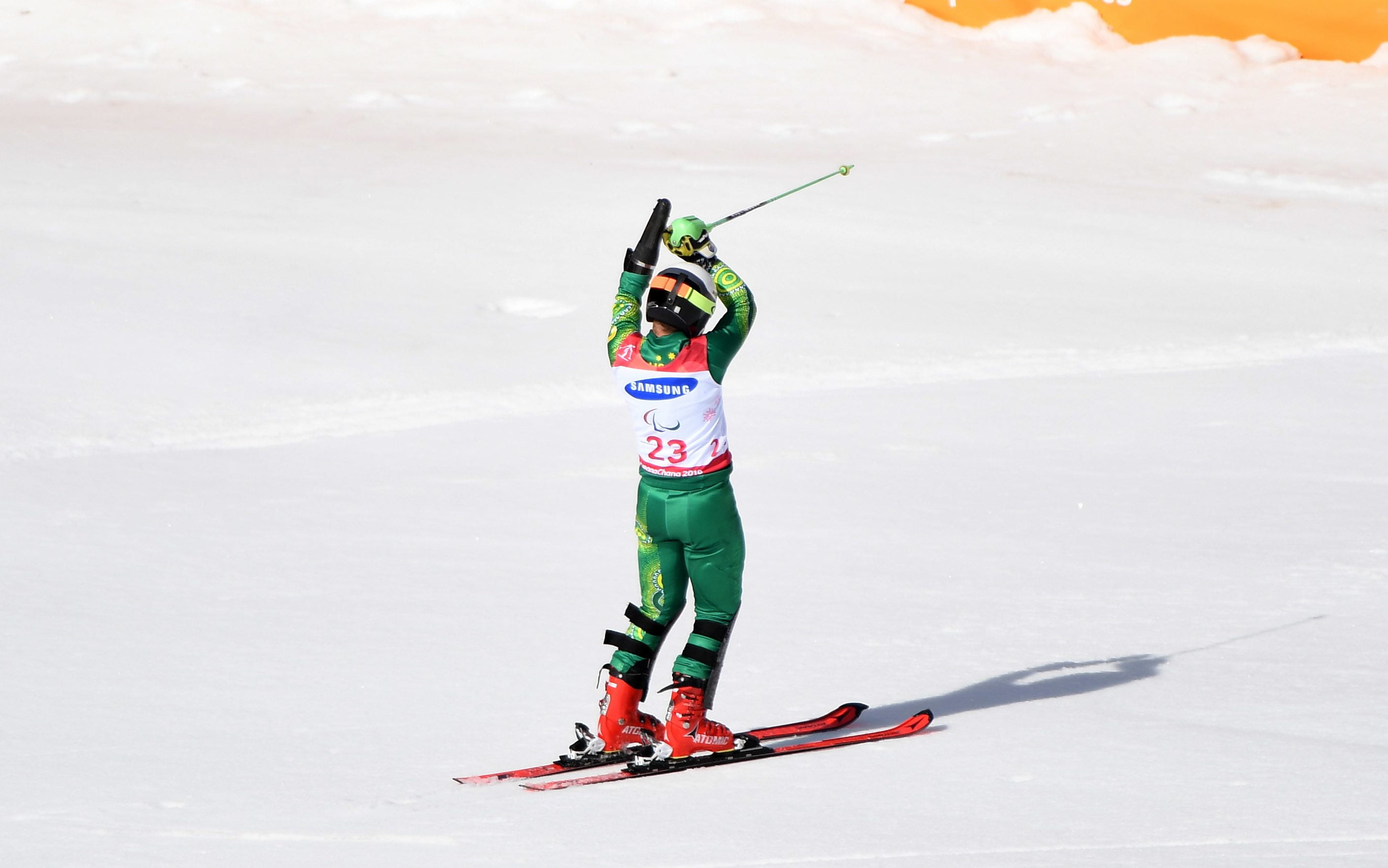 Australian Paralympic Team co-captain Mitchell Gourley enjoyed his third top-10 finish at the PyeongChang 2018 Paralympic Winter Games Games, but yet again, a first Paralympic medal for the Victorian has eluded him.

It seems the Paralympic gods are against Gourley getting a medal hung around his neck. He is a three-time Paralympian, and in eight previous races at the Vancouver 2010 and Sochi 2014 Paralympic Games, Gourley had three top-10 results.

He is the reigning world champion in the men’s super combined Standing from the 2017 World Para-alpine Skiing Championships in Tarvisio, Italy. He has seven gold medals from World Cup series racing. The quality is undeniably there, but success seems so evasive at a Paralympic Games.

“I don’t think that anything that I did up there today was any different to what I do any other day of the year or any day in the cycle,” Gourley said.

“I’m really proud with how I’ve skied today, but unfortunately I was beaten by better skiers on the day.

“The first Games in Vancouver was exciting, the second Games in Sochi was stressful, but this one has been a lot of fun,” he added.

“As with every Games, there are highs and lows, but it’s really good to be a part of this Team and the success we’ve had as a group. The overall morale in the group has been great, they’re excited to be here, and have lots more to give in the years to come.”

The Australians’ medal tally with one event to go in PyeongChang – the women’s slalom tomorrow – is one gold and three bronze.

Gourley would have loved to have add to that tally. He has some thinking to do on whether to put himself forward for the 2022 Paralympic Winter Games in Beijing, China.

“It happens, and we’ll see. I’ll have a think about it. First, I want to go and have a nice cold beer with my very loud and obnoxious friends and think about it next week,” the 26-year-old said.

“I’ll be back next year for World Champs, for sure, and then we’ll see what it looks like after that.”

One bright note was that a southern hemisphere Para-alpine skier did win a medal today – New Zealand’s Adam Hall taking gold in Gourley’s Standing class. France’s Arthur Bauchet took silver and the USA’s Jamie Stanton, bronze. Gourley and Hall are good friends and dead-heated down the first slalom run today to, at one stage, be locked in first position midway through the competitors list.

“If I can’t win, and in the absence of Toby [Kane], Cam [Rahles-Rabula] and Marty [Mayberry], that’s the guy I want to win,” said Gourley, referring to retired Australian Paralympic medallists and teammates of his in Vancouver and Sochi.

“In that first run, being tied with Adam in first place, that was – hands down – the best finish-line moment of my career. I’m tied with one of my best friends on the biggest stage in the calendar.”

At least Gourley got to the second run today.

On the flip side, came a succession of DNFs [Did Not Finish] from the other five Australians competing on the 54-gate course at the Jeongseon Alpine Centre today.

Sit-skiers Sam Tait and Mark Soyer finished in 17th and 18th places respectively in the giant slalom, but that form did not translate to the slalom with its tighter gates.

“I am disappointed, but it was a fight, and I knew it would be a fight to get down. I’ve still had a good week,” said Tait, who slipped off the course today.

“I just came out and the first section was a bit steeper than I thought. I was late into one turn and couldn’t get my line higher.”

Now he will take a short break, compete in the Australian winter season and then get back to the northern hemisphere’s World Cup series before next year’s World Championships.

“This week has had some ups and down. I definitely started off on a huge high [11th in the men’s downhill Sitting], but it’s been a great learning curve and I’m keen to take all this racing experience into the next season.

“The low point was not finishing either the super-G or super combined. But now I know I can perform at a huge event without letting the cameras and crowd get into my head.”

Soyer had gear troubles early and that soured his week a little. But his rig was in full working order today.

“I just caught my outrigger on the actual start gate,” Soyer said. “So it’s all over [competition in PyeongChang] now. Performance-wise this wasn’t a great week for me personally, but points-wise in the standings and the ski racing leading up to here was pretty good, so that’s why it’s been a bit frustrating.

“Hopefully I’m going to World Champs and get back on track there.”

Australia’s two male vision-impaired skiers Patrick Jensen with guide Lara Falk, and Shaun Pianta with his guide Jeremy O’Sullivan were 11th and 14th in the giant slalom, but crashed out in the slalom.

“I just straddled on the way into one of the combinations. I wasn’t on the line I should have been and got a little late…just didn’t go to plan,” said Jensen, who gripped his helmet in disbelief as he exited prematurely.

“I knew exactly what happened – it was just straight-off disappointment. Five minutes later I realised how much of an honour it is to be here competing so I felt a bit better.”

Falk said it wasn’t a common error for the pair.

“Coming off this season we actually haven’t DNFed many races. I think it’s maybe only our second that we haven’t finished out of the entire season since November,” Falk said.

The pair – on debut at the PyeongChang Paralympics – want more, and are already planning for 2022 in Beijing.

“I wish it was next year. Just gaining the experience from these Games has got me so pumped to want to be out with the best at the next one. It makes you want to train harder to push myself more,” Jensen said.

St Patrick’s Day – March 17 – is exactly two months to the day Pianta tore his anterior cruciate ligament in his right knee, throwing a cloud over his PyeongChang campaign.

Intensive physiotherapy after surgery got him back on the race hill.

“I honestly didn’t feel the pain here,” Pianta said. “On a scale of one to 10, it’s a one. I wear a brace on my right knee, so that keeps it pretty stable.”

Pianta caught the tip of his right ski on a gate and fell. O’Sullivan looked back to see if his partner could get his balance back, but couldn’t.

“It’s really disappointing and frustrating to come out in the first run. I would have so liked to put two good runs down,” Pianta said.

O’Sullivan said: “We’re a team and we’re sticking together. It wasn’t our day today but we’ll keep working.

“I feel so proud to help Shaun get here. That was our goal four years ago, and we’ve had some massive hurdles. But through those tough times, we were always confident and always focussed.

“We dug deep – I’m super impressed with this guy right here,” he added, before turning to hug Pianta, who lost most of his sight when a superbug in Bali, Indonesia, attacked his optic nerve.

His family from Western Australia were by his side then and were with him again today in Korea.

“It means the world to me that they’re here – ever since I lost my vision 10 years ago, they’ve been there with me on the rollercoaster through all my ups and downs,” 29-year-old Pianta said.

“They helped put me back together when I was broken. Here they are at the main event – it’s really cool.”

Standing class skier Jonty O’Callaghan was the fifth DNF for Australia after the first slalom run today. He returns to Melbourne University and his Bachelor of Arts degree later this month.

Meantime, he will reflect on his first Paralympic Games.

“You remember that it’s not easy to get here, but I’m still in the phase of disappointment,” he said, after pushing out of a gate too hard, which pulled him off-course.

“I’m sure that will last a bit longer, as I am quite disappointed with certain results here.

“But I am very proud of getting here, and I’ve been blown away by the environment and all the different aspects of the whole spectacle that is a Paralympic Games.

“Given that I hadn’t had much major championship experience, you recognise the step up. And with World Cup, you get far more chances, as they come around nearly every week in season.

“So that means more opportunities to perform. But here, it is one chance.”

The 2018 campaign for the 15-member Australian Team ends tomorrow with the women’s slalom, featuring double bronze medallist in PyeongChang, Melissa Perrine, in the Visually Impaired class.