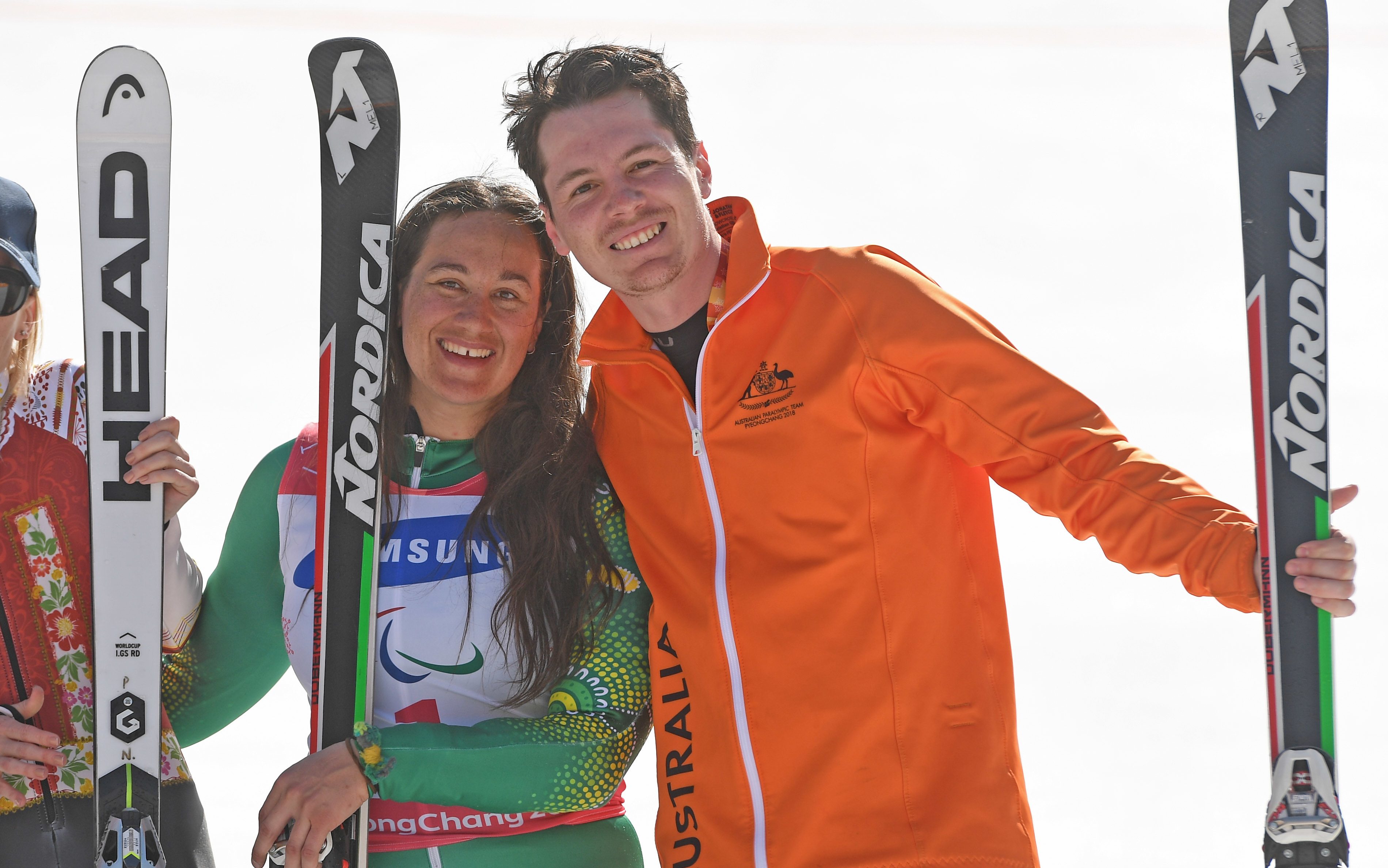 The longer road to Paralympic glory for Mittagong’s Melissa Perrine convinced 2018 Australian Team Chef de Mission Nick Dean that she was the ideal choice to carry the flag at tonight’s (18 March) Closing Ceremony at the PyeongChang Stadium.

With two athletes winning two medals each in South Korea – Perrine’s two bronze in Para-alpine skiing and Simon Patmore‘s gold and bronze in Para-snowboard – it made the decision a tough one.

Patmore enjoyed the better results and also made his Paralympic Winter Games debut in PyeongChang. Perrine was at her third Paralympic Games after two, at times, heart-breaking campaigns in 2010 and 2014.

“Mel’s a campaigner and as I said right at the outset, I’m happy for medals of any colour,” Dean said.

“Simi [Patmore] was fantastic. Mel’s is more of a saga, more of a story – three Games, 10 years of hard training,” he said.

“What a fantastic effort. Why not have a Para-alpine skiing flag-bearer? We had a Para-snowboard flag-bearer to open [Joany Badenhorst], so we’ll have an alpine flag-bearer to close.

“I think when we speak to Simon he’ll be absolutely stoked. And that’s what teams are all about. All talk aside, it’s a very united team.”

Perrine showed that when asked about her emotions after Dean told her.

“A little bit of disbelief, going, ‘Why the hell did they pick me?’ Just incredibly thankful. I was shocked and stoked to get this opportunity,” she said.

“He’s had an amazing Games. He’s an amazing athlete. I would have been proud to walk out behind him as well. There’s a bunch of awesome athletes and awesome competitors, and to be considered for this is an honour.”

Being named flag-bearer is the icing on a breakout Paralympic Games for Perrine.

Everyone would have excused the 30-year-old physiotherapist for arriving in South Korea almost tentatively. Although a three-time world champion from 2015, her Paralympic Games shelf was bare.

From Perrine’s 10 races at the 2010 and 2014 Paralympic Games, she had four top-10 placings, five DNFs (Did Not Finish) and a DQ (disqualified). The Paralympic Winter Games had been a fairly traumatising experience.

At last the international results she had achieved in World Cup racing – 35 podiums in all since her international debut in the 2009-2010 series – had translated into Paralympic Games success.

And for the first time, her parents from Mittagong on the NSW Southern Highlands, Ronald and Denise, had been able to see her ski. That was made possible by the generosity of Perrine’s current coach and guide, Christian Geiger.

He, too, will help carry the Australian flag with Perrine at tonight’s Closing Ceremony.

“If I fall, he’ll be agile enough to pick me up,” Perrine said.

“The lasting memory from these Games is the fact I’ve got two of the most incredible people on the planet by my side throughout the entire season – Tori [Pendergast, her teammate] and Chri [Geiger]. I could not have done this season without them. Tori’s a massive mountain of support and she’s an incredible athlete and skier. And Chri is an amazing skier, coach and friend.

“Four years of hard work went into those medals – well, 10 years. I feel the flag is a recognition of the hard work. So I’m going to love the medals and what they represent, and the fact I was able to do it with Chri.”