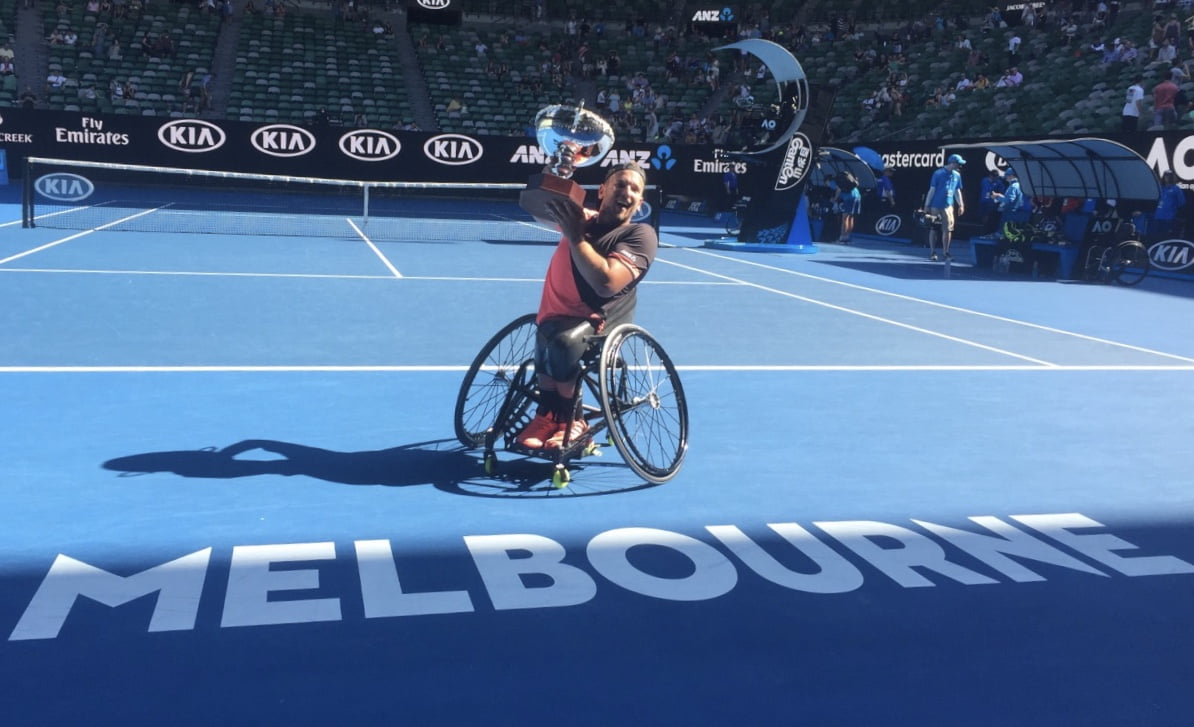 The reigning Paralympic champion wheeled onto the iconic grand slam court on Saturday to face world number one and long-time rival David Wagner (USA) and relentlessly took charge in the thrilling finals clash, to come out on top 7-6 [1), 6-1.

After falling short in his round robin match with Wagner earlier in the week, Alcott’s 81 point win over one and a half hours, was no mean feat after a game-for-game first set.

“It’s been a big couple of days – a big two weeks really. I was pretty glad I could top it off with a win,” Alcott said.

“It’s just been a lot of hard work, but the best decision I’ve ever made was coming back to tennis,” he said.

“I love playing wheelchair basketball but this has changed my life and now, I think it’s starting to change the lives of some other people as well, which is what I’ve always wanted to do. Did you see how many kids with disabilities were there today?

“Last night’s semi-final was broadcast on Seven. Ten years ago I could have given Seven a million dollars to put it on TV and they would have said no… I’m lost for words thinking about how awesome that is.

“Hopefully, maybe next year or the year after, after one of their quarterfinals, instead of having a legends doubles match or an exhibition, (the Seven Network) might put on a wheelchair match on the schedule. It’s just about chipping away and changing perceptions.”

Commenting on the overwhelming amount of support he has had in the last four years, Alcott said:

“It means a lot to me, but it also means a lot to other people. I know this because I get thousands of messages from parents who said it’s changed their own perceptions of their kids with disabilities, it gives their kids hope of what they want to do and gives themselves hope.”

With his ranking edging closer back to the number one spot, Alcott is now looking ahead to his next Grand Slam – Wimbledon, which will be a first for wheelchair tennis.

“We’re in Wimbledon for the first time this year. Even though it’s an exhibition match, slapping on the all-whites is a dream of mine. To say I cannot wait is the biggest understatement of my life, and I think we deserve to be there.

The opportunities for athletes with disabilities to compete at big events like these are far and few between, he said.

“The Australian Open and Wimbledon – the other tournaments we play aren’t all like this. They’re out in the country and sometimes there are six people there. I want to be changing lives and enjoying my life.

“I want to fight for these times – like train hard and get up early and all of that, because these and Paralympic gold medals in my opinion, that’s what motivates me.

“I remember when I won the Beijing gold medal (in wheelchair basketball) and I got four words in the Bayside Leader, my local paper. I was stoked and that’s all you could get at the time.

His message to the Australian public:

“Keep doing it for other people with disabilities. They’re out there doing awesome stuff, but as you can now tell, the public now care about it too.”