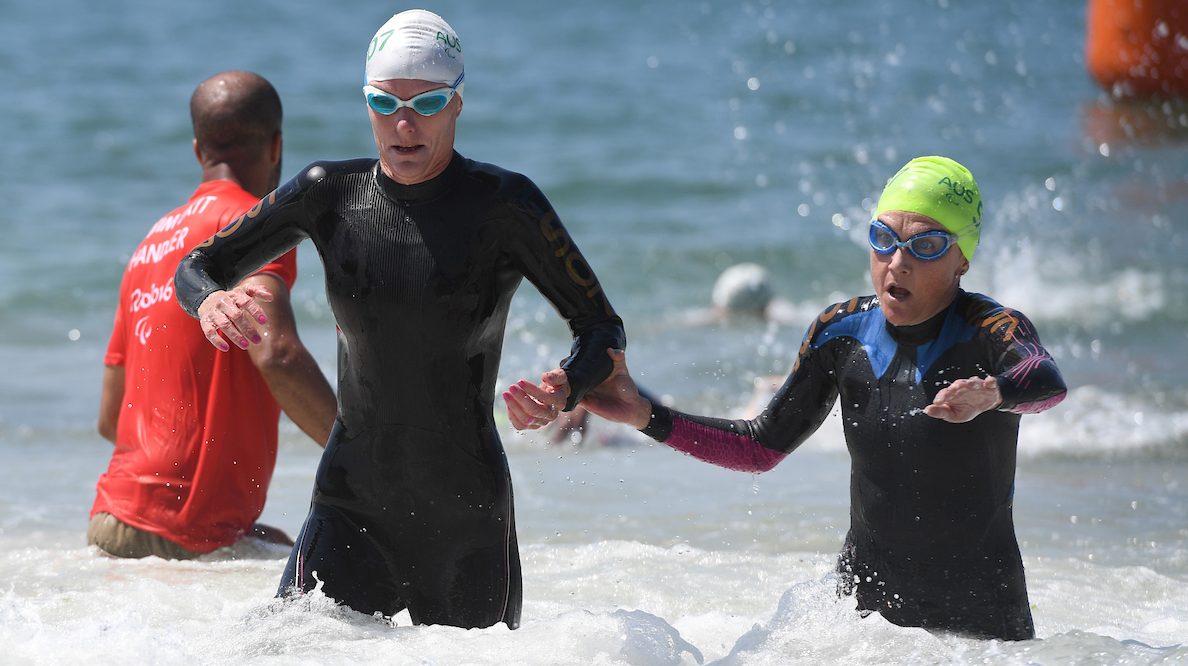 Australia has had a golden start to the ITU World Triathlon Championships in Rotterdam today, with its all-conquering Para-triathletes grabbing two gold and two silver medals on the opening day.

There was further excitement in the Australian camp later in the day when Gold Coast Commonwealth Games automatic nominee Emily Tapp (PTWC1) grabbed her maiden World title in the PTWC category for wheelchair athletes.

Canberra-based Queenslander Tapp topped her 2015 World Championship debut where she was the silver medallist.

As there was no female PTWC event in Rio, Emily switched to athletics, and was selected for the Australian Team but an injury prevented her competing.

Emily has won the Gold Coast and Edmonton WPS races in 2017, and has achieved the automatic selection for the 2018 Commonwealth Games Team, where the PTWC women and men have full medal status.

A third gold went begging when Godfrey lost valuable time in the PTS3 category after suffering a flat tyre early on the bike – dropping to fourth before riding into silver.

Perth mother of two, Pilbeam maintained her reputation as one Australia’s most successful Para-triathletes, taking her medal tally to two gold and two silver medals after her silver in 2016 as well.

The two-time World Champion’s arm amputee class is one that has had the most change in the latest revision of the ITU classification system and she now competes mostly with a different group of athletes than those she did previously.

Pilbeam was a silver medallist at the 2016 World Championships, also in Rotterdam, and unfortunately her then PT3 class was not included in the Rio program.

It is her fifth World Championships for Australia, after making her debut in 2013.

And in further bad luck for the Australians, a crash also early in the bike cost Victoria’s PT5 Paralympian Kate Doughty a podium place.

She lost over two minutes and after one stage almost calling it quits, recovered and battled on bravely for fourth, later receiving stitches on the side of her leg.

It was a hard-fought fourth place emulated by Queenslander Nic Beveridge, with his best-ever international performance in the PTWC wheelchair category.

For world champion Kelly, today was a continuation of her stellar Para-triathlon career with Jones.

Kelly has overcome a torrid year with injury to add a second World Championship title, in a time of 1:13:48, to the first she won with Jones in Chicago in 2015.

“I am just very happy and just chuffed to get that result, in what was a really tough race on a really tough bike course and it comes after what has been a massive 12 months. I’m really stoked, Michellie rode really well,” said Kelly.

The inclement weather forced organisers to delay the start by an hour from 9am to 10am, which did not deter the repeat world champions.

“It was nice, we actually went back to sleep and then we couldn’t have asked for a better day after yesterday’s [rain and wind].

“There were a lot of crashes around us and our goal on the bike was to be conservative on the corners and to push where he could.”

In other results, Jonathan Goerlach (B2) with guide Simon Hearn finished sixth in 1:09:04, while Gerrard Gosens (B1) with guide Dmitri Simons finished ninth in 1:11:52.

Also in ninth was South Australia’s Scott Crowley (PTWC), who crossed the line in 1:13:43, with West Australian Paralympian Brant Garvey (PTS2) improving on his 10th place finish in Rio to finish eighth in 1:17:28.