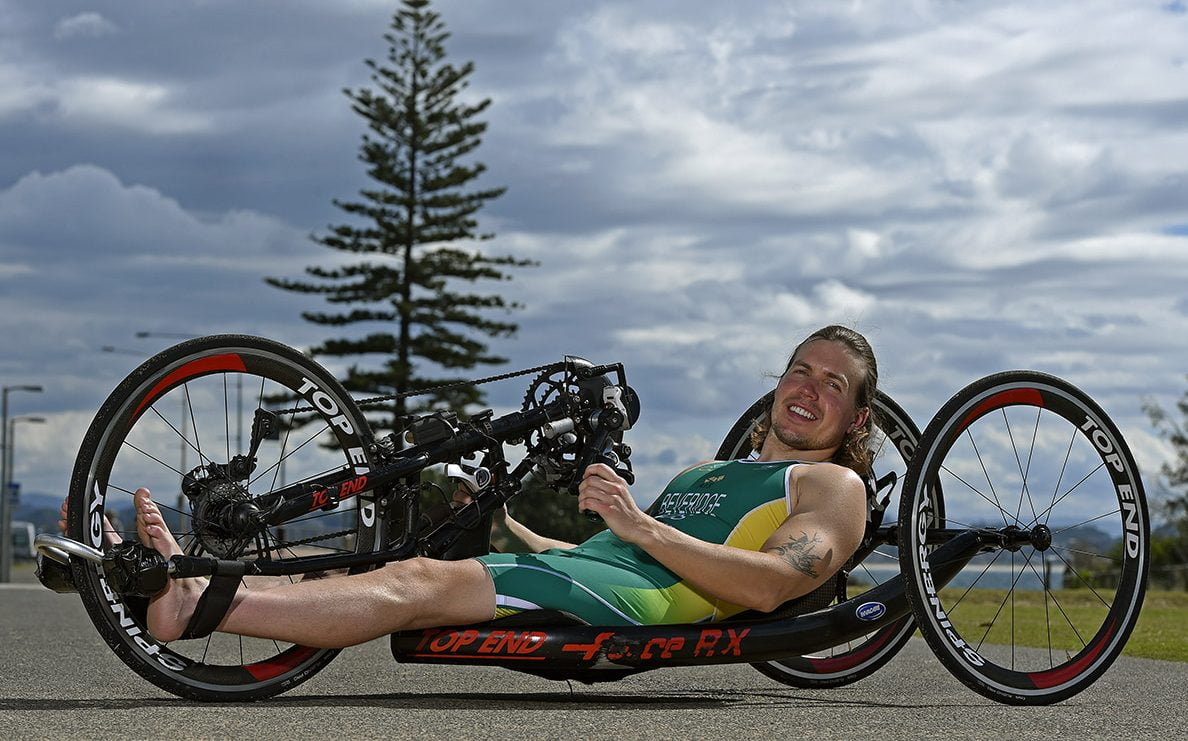 The Para-triathlete has overcome illness and misfortune on his way to facing off against the top nine athletes in his class in Rotterdam.

“I guess the good thing about being a triathlete, I guess even with life, is there’s always something you can do no matter what your situation,” Beveridge said.

Beveridge’s situation left him without a racing wheelchair for three months. The trouble started in transit.

“I was coming home from Yokohama in Japan on a flight from Sydney to Brisbane, and when I arrived, my racing wheelchair had experienced damage.”

The chair was a write-off, and in the world of Para-sport, replacing specialised equipment isn’t as simple as a trip to the local shops.

“It took three months to get the replacement, but without the help of the airline, it could have taken even longer. They were fantastic – they helped me rectify the situation as quickly as possible,” he said.

“The thing with a racing wheelchair is that they’re such customised pieces of equipment that if it’s not made exactly for you, basically you can drop minutes [in a race].”

Despite the limitations it would place on his performance, Beveridge borrowed a chair from another athlete and was ready to compete in the ITU World Para-triathlon Series in Edmonton, Canada, when misfortune struck again.

Beveridge has a weakened immune system after contracting transverse myelitis in Year 12, which paralysed him from the waist down, and just prior to setting off for Edmonton, Beveridge was struck down by illness.

“It was some sort of respiratory infection. I was completely fine, then two days before I was due to fly out, I woke up and I was gone. I was struggling to get out of bed and ended up having to go to hospital and get some tests done,” he said.

“I haven’t actually been this sick since my early- to mid-twenties. It just absolutely floored me. I don’t have a very strong immune system anymore.”

Beveridge rode out the rough weather and is now fully healthy with a new chair, and ready to pick up where he left off.

After the Paralympic Games in Rio de Janeiro, Brazil, last year, Beveridge joined forces with a new coach and has been quickly closing the gap on his competition.

“I reached out to a coach on the Gold Coast – his name is Dan Atkins. I’d met him a couple of times and spoken with him. Without really being able to put my finger on it, I just had a good feeling about him,” Beveridge said.

“I just wanted to feel completely satisfied with my results. In Rio, I came ninth and there was nothing else I could have done to do better in that race, but I still felt frustrated.”

Beveridge felt he was capable of more, and thought Atkins was the man to bring it out.

“I still felt like there was so much more within myself. I didn’t feel like I was the finished product as far as an athlete goes. That’s where finding the right person to work with, to help me turn myself into the best level athlete I can be, became quite important.

“I said what it was I wanted to achieve, and fortunately he was prepared to take a chance on me. That was all I really need to hear, so I packed my life up in Canberra and relocated back to Queensland.”

His trust in Atkins has proven well-placed.

“Since I’ve been with Dan, every race I’ve done, I’ve felt satisfied for where I’m at and what we’ve done. I’ve earned that result.

“The taste in my mouth has gone from, ‘I’m bitter’ to ‘I just want more’. It’s a healthy, hungry feeling. I’m finally where I need to be to become the best me.”

Beveridge’s improvement can be marked by his performance in relation to close friend and five-time world champion Bill Chaffey.

In Rio, Chaffey finished nine minutes ahead of Beveridge. That gap closed to just 47 seconds in Yokohama.

“If you had said to me in 2016 after the Paralympic Games that in May 2017, I’d be within 47 seconds of Bill, I would have found that difficult to believe. I would have believed I could get closer to him, but not close the gap that was currently there,” Beveridge said.

“I guess that mystery is kind of what appeals to you. You don’t really know what your boundaries are until you put everything into it and find out.”

Chaffey has been an inspiration to Beveridge since stumbling across an article about the Para-triathlete and Ironman while lying in hospital, kick-starting his Para-sport career.

“I can’t guarantee that I will beat him, and it’s not really my style to come out and say I will beat someone. I can guarantee I will have exhausted every option available to me to find out if it’s possible.”