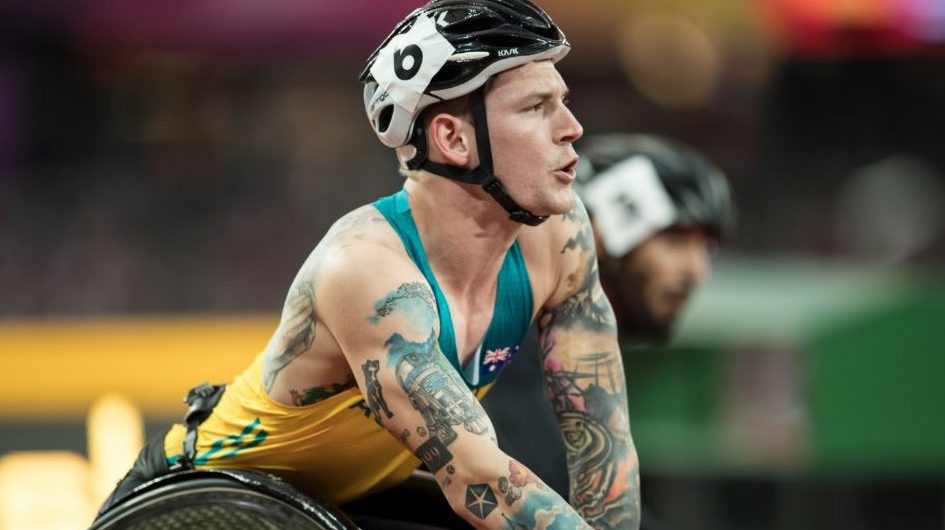 Australia continues to impress at the 2017 World Para-athletics Championships in London, England, with three silver and one bronze medal being added to their tally on day two.

Beginning the day’s haul was Guy Henly (F37, NSW), who threw a massive 53.59m in his sixth and final attempt in the F37 discus.

Henly, who secured his second consecutive silver at a world championships was proud of his result, after a disappointing fourth place finish at Rio 2016.

“I went into the circle for that last throw, thinking about nothing, just trying to blank everything out and just go out there, throw the best throw I could,” Henly said.

“When I saw that number come up, I was gobsmacked. It was one of those rare throws that seemed effortless and it just flew. It was exciting. I’ve managed to put it all together when I needed to, which is pure joy.”

Dual Paralympic silver medallist Rheed McCracken (T34, Qld) put on a nail-biting show in the T34 100m event. Although he broke the world record in May this year (14.92), McCracken was unable to claim his maiden world title, clocking in at 15.40s (+0.3) to finish in second place, just 0.4s shy of Tunisia’s Walid Ktila.

“It’s mixed emotions for me right now,” he said.

“There’s a lot of people that would kill to have a silver medal, and it’s two places better than what we did in Doha in 2015, but I felt like I was there [at that level] in May. Although I question what it is going to take to win, I know it’s something I’m still learning.

“I proved that I have what it takes by breaking the world record – it’s just about doing it when it counts.”

Racing stalwart Angie Ballard (T53, NSW) added another medal to Australia’s haul with silver in the T53 200m. Although unable to defend her crown, it took a world record from Great Britain’s Samantha Kinghorn to beat her time of 29.09s (+0.5).

“I was happy with what I put together but Sam was just a little bit faster on the day. I remember my first world champs gold, and it’s a really special moment and it was kind of cool to see it, even though I was second to it,” Ballard said.

The 2015 world champion for athletes with an intellectual disability, Todd Hodgetts (F20, Tas) was also unable to hold onto his world title, taking bronze in the F20 shot put with a throw of 15.96m.

While the world record for the event was broken early on by Malaysia’s Muhammad Ziyad Zolkefli, Hodgetts knows what it will take for him to win back his world and Paralympic titles come 2019 and 2020.

“Today was way better than Rio already. There were a few kerfuffles, but I came back strong in the last throw like the champion that I am,” Hodgetts said.

“I don’t hold back and I never give up. [To Zolkefli] Congratulations, but I’m working on a few techniques and strategies, so this is not the end. I’m going to continue until I’m 40,” he exclaimed.

Another exceptional result was from Rio 2016 Paralympian Sarah Walsh (T44, NSW), who only narrowly missed the podium with a fourth place finish in the T44 long jump.

“Distance-wise it wasn’t my best, but fourth is the best that I’ve placed on the world stage, and it was 1cm further than in Rio. It’s always great to have done one better than your last international competition,” said Walsh.

“I fowled two big ones at the beginning, so I was pretty conservative on my third jump. I was able to give it a bit more of a go, but fourth is what I came away with and I’m pretty happy with that.”

In other results from day two, Ella Pardy (T38, WA) and Torita Blake (T38, QLD) both raced in the T38 200m for athletes with neurological impairments, placing fifth and seventh, respectively, while supremo wheelchair racers Madison de Rozario (T53, WA) and Jemima Moore (T54, Vic), along with Ballard, all put Australia in contention for the T54 1500m world title, with de Rozario qualifying fastest in the heats. All three will go for gold tonight at 8:20pm AEST.

Four-time Paralympian Louise Ellery (F32, ACT) competed in the F32 shot put, placing sixth with a throw of 4.31m, and dual Paralympian Michael Roeger (T46, SA) was due to race in the T46 1500m but pulled out due to injury.