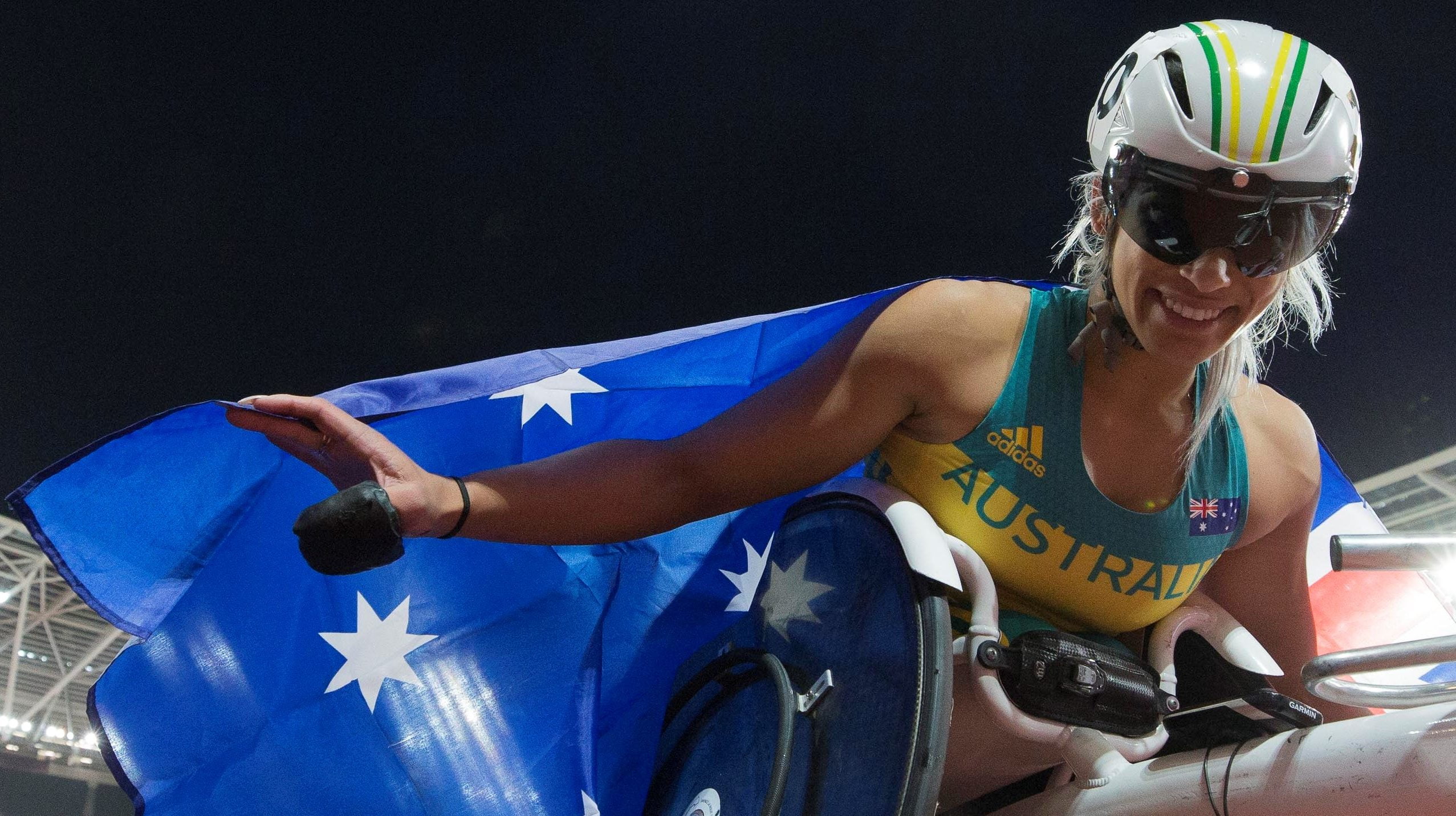 Jayden Sawyer (F38, ACT) and Deon Kenzie (T38, Tas) have become world champions for the first time, and Madison de Rozario (T53, WA) has claimed victory in the T53 5000m on the penultimate day of the 2017 World Para-athletics Championships, to bring Australia’s medal count to 25.

Kenzie kicked beautifully at the final 200m mark to win his maiden world title in the T38 1500m (4:06.68), from France’s Louis Radius and Tunisia’s Abbes Saidi.

Going in as the current world record holder, Kenzie and his coach Mike Gunson perfectly planned his preparation in the lead-up to this event, which eventuated in his second medal of the championships.

“I’m overwhelmed. This has probably been my best preparation in the lead-up to a world championships. I knew that today I had to put it all on the line and really play to my strengths.

“My coach Mike and I, we put in so much work over the last eight years, and it’s so good to have it all finally pay off. I started running almost a decade ago, and I made a commitment to myself that one day I’d be an elite athlete, and today I’m a world champion.”

The first words that left Sawyer’s mouth as he walked off the field from the F38 javelin throw at London Stadium were: “Where did that even come from?”

The humble Canberran has been putting in the hard yards in javelin since the Rio 2016 Paralympic Games, and impressed on day nine with a world record and personal best to win gold.

Improving on his third place finish at the 2015 IPC Athletics World Championships, and up four places from the 2016 Paralympic Games, Sawyer threw an enormous 52.96m – his personal best by 4.5m.

“It hasn’t sunk in yet but I’m sure when it does, this will feel absolutely amazing. Out there on that field, with that crowd there, it’s incredible,” Sawyer said.

Next for Sawyer will be training for the Gold Coast 2018 Commonwealth Games, where he’ll compete alongside current world champion Cameron Crombie (F38, ACT) in the F38 shot put.

“We’ll have fun with that. I’ll still be concentrating on javelin for 2019 [World Championships] and of course Tokyo [2020 Paralympic Games], but looking forward to getting out the shot put again. Cam’s set a benchmark and I’ll be looking to chase that.”

Winning her second medal of the championships was wheelchair racer de Rozario, who showed her dominance on the track to claim the world title in the T53 5000m.

One of the most strategic events of the Championships, de Rozario found herself in and out of gold medal contention throughout the race.

“The whole time I kept coming in and out of the lead, and I was worried I had my main lead too early in the piece. All the big screens around the stadium helped so I could look back and see what was happening,” de Rozario said.

“I know I need a long wind-up, and with a couple of laps to go, I kicked forward and I’m so glad it worked out.

“Going in, it was an event we knew could potentially be my strongest. 800m is traditionally my strongest, and that’s tomorrow night, but we’ve put in a lot of work into this in the last 12 months and I’m so happy it’s come together.”

While his final place wasn’t what he had hoped for, the 48-year-old thrower found himself with a back injury in the days leading into competition and considered his performance a standout given his circumstance.

“On Thursday, I wasn’t going to throw. I spent all week on my back after twinging it after two throws on the warm-up track. So from yesterday morning, thinking I’d not be able to throw, to throwing over 14m a couple of times, it’s not too bad,” Short said.

“I really do think I could do a ninth world championships. Before we came over, we were looking at numbers. I was throwing 14.60m in training half a dozen times, and over 15, so if I can continue that, I could get myself up into medal contention, so why not?

“I’ve got to check with the wife and boys first, but we’ll see.”

Setting himself up for another potential victory tomorrow, Kurt Fearnley (T54, NSW) qualified for the T54 5000m final, after finishing second in the second heat.

While the four-time world champion is feeling confident for tomorrow’s final, Fearnley admits a podium finish to end his London 2017 campaign will be challenge.

“It’s a fatiguing track out there, different to a lot of surfaces, but we all kept the pace moderate in this heat to knock out some of the fast guys in the first heat,” Fearnley said.

“I feel confident but it will be tough as nails. Marcel [Hug from Switzerland] will be a hell of a purple patch but you get in these finals, and you have no idea of how things will go. It will come down to the last lap, that’s for sure,” he said.

Jake Lappin (T54, ACT) was set to race in the heats but withdrew from competition.

In other results from day nine of the World Para-athletics Championships, Adelaide’s Brayden Davidson (T36, SA) raced through the T38 100m heats to finish 8th in the final.

Australians at home can watch the final day of competition live via www.paralympic.org.au/ParaSportLive