Rio gold and now a world record for Rachael Watson 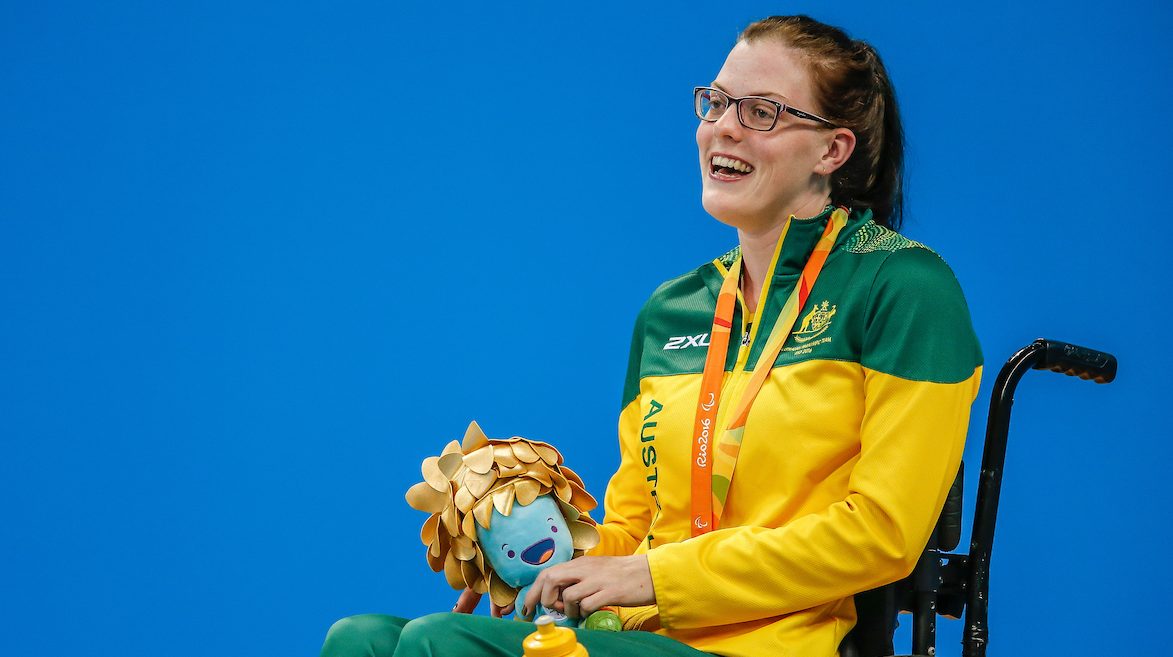 After setting a speedy tone for the morning with a world-best time of 38.66 in the prelims, Rachael returned to the pool last night to better her record by nearly a second, clocking 37.87.

“Breaking the record on home ground in front of my family and friends is amazing,” Watson said.

Receiving a hero’s welcome, it was only eight months ago that she set a new Paralympic record to win gold on debut at the Rio 2016 Paralympic Games.

Having come within a whisker of the women’s 100m freestyle S4 world record at last year’s Swimming Nationals, Watson caught the eye of athletes and coaches on the Dolphins squad, making her international debut just a few months later at the IDM Berlin Open, where she won 50m freestyle gold in an S4 Oceania record time of 39.97.

A triplet, Watson was diagnosed with spastic diplegia cerebral palsy when she was two-years-old, a result of being born nearly four months prematurely. She first took up swimming as a form of physiotherapy and pain relief.

She was joined on the podium by Paralympic Teammates Lakeisha Patterson (Lawnton) in silver in 30.34 and Maddison Elliott (NU Swim) in bronze in 30.36.

A stellar day for the Paralympic program, S9 swimmer Abigail Lihou (Ferny Hills) also impressed, recording a world-best time of 33.10 in the women’s 50m backstroke multi-class prelims, before securing the national title in 33.44 ahead of dual Paralympic medallist Taylor Corry (MLC Marlins) in 32.57 and  up-and-comer Jamie-Lee Getsons (Melbourne Torpedoes) in 34.23.

With his family and friends watching on, Paralympian Daniel Fox (USC Spartans) tasted victory in the men’s 50m freestyle multi-class, retaining his title in 24.76. Silver went to Mitchell Kilduff (SLC Aquadot) in 25.41 and bronze to Rowan Crothers (Yeronga Park) in 24.23.

After securing 50m freestyle silver earlier in the night, Patterson upgraded to gold in the women’s 200m individual medley multi-class. Touching the wall in 2:43.59, she got the better of Paralympic gold medallists Tiffany Thomas Kane (Ravenswood) in 3:10.53 and Katherine Downie (Perth City) in 2:35.44.

Matt Levy (Unan) continued his fine form this Nationals campaign, winning the 200m individual medley multi-class in 2:37.58 ahead of Paralympic Teammates Timothy Disken (PLC) in 2:19.78 and Timothy Hodge (The Hills) in 2:21.00.

Heats commence at 11:00am AEST today.