That’s a wrap for the Rio 2016 Paralympic Games 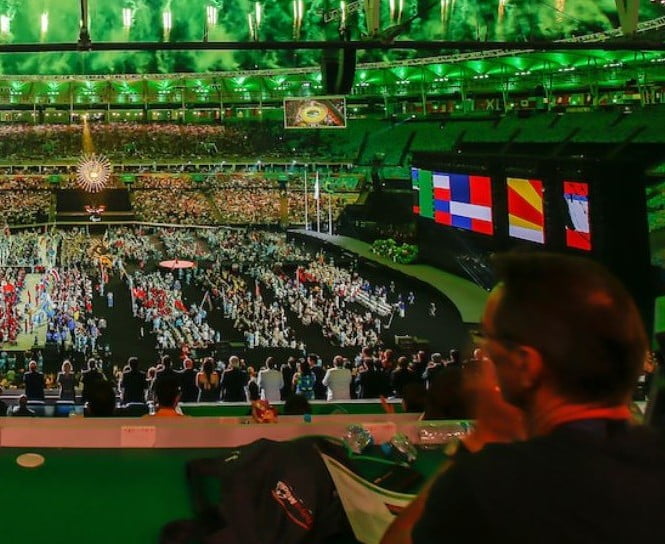 The Rio 2016 Paralympic Games have officially come to a close, with a loud, dynamic and colourful celebration of the athletes and their achievements.

Rhythm, sound and inspiration kicked off the ceremony at Rio’s famous Maracanã stadium. Like sport, music brings people from all over the world and all different cultures together and it is at the core of the Brazilian culture.

Titled “Sounds of Silence” the opening sequence was inspired by those who play an instrument but cannot hear, those who dance but cannot see, those who express themselves and tell stories of transformation. It was a tribute to the athletes, a salute to the volunteers, an invitation for everyone around the world to broaden their senses.

The music and spectacle of lights had the crowd on their feet to welcome the nations with the entrance of the flags.

Australia was represented by Rio gold medallist in para-canoe, Curtis McGrath who waved the flag with pride. McGrath was an inspired choice by Chef de Mission Kate McLoughlin, with the 28-year-old chosen for his determination, dedication and embodiment of the true Australian spirit.

“It was amazing to see our Mob who have worked so hard in the lead up to let their hair down,” Chef de Mission Kate McLoughlin said.

“They deserved the best celebration possible and Rio definitely put it on for them. Athletes both old and new, won medals and achieved their best at these Games and the Closing Ceremony was the perfect way to celebrate their achievements.”

With the stadium full to the brim with athletes from 160 countries, famous Brazilian musicians entertained the formalities begun.

Tatyana McFadden of the USA and Independent Paralympic Athlete, Ibrahim Al Hussein were presented with the Whang Youn Dai Achievement Award for

Just hours after taking silver in the T54 marathon Five-time Paralympian Kurt Fearnley was centre stage in the Ceremony as one of five athletes elected to the IPC Athletes Council at these Games.

The volunteers, without whom the Games would not be possible, were then recognised for their hard work. A small team volunteers, representing the thousands that have helped to turn the Games into reality, received a Brazilian flower, sowing a little bit of the dedication and positivity that they brought so much of to the Paralympics.

President of the International Paralympic Committee, Sir Phillip Craven passed over the IPC flag to Yuriko Koike, the Governor of Tokyo ahead of the next Paralympics in 2020. The Japanese national anthem played, the flag was raised, the crowd was treated to a trifecta of sensational Japanese entertainment.

GIMICO, an amputee model, started the show followed by Koichi Omae a professional dancer who lost his leg and regained a zest for life, creating a unique dance performance by taking advantage of his impairment. Tokyo then showed just how impressive their Games intend to be, with a dance performance led by visually impaired performer Akira Hiyama in front of a spectacular multimedia backdrop. The ultimate Tokyo 2020 message was that having an impairment brings new possibilities, and Tokyo will show how people with an impairment have new opportunities

President of the Rio 2016 Organizing Committee of the Olympic and Paralympic Games, Mr Carlos Arthur Nuzman addressed the athletes and crowd before Sir Phillip Craven delivered a passionate speech in which he addressed the Paralympians with joy.

“You defied expectations, rewrote the record books and turned ill-found pity into pride,” he said. “You are now heroes and role models for a new generation of sports fans from all over the world.”

He went on to praise Rio 2016, awarding the city of Rio and the people of Brazil the Paralympic Order, the highest honour a person or group can receive. As well as highlighting the many Games triumphs, Craven recognised the sombre of the passing of road cycling athlete Bahman Golbarnezhad of Iran.

Despite the heavy rain, the show went on and the party really got started with great Brazilian entertainment after the formalities.

To end the Ceremony, people carrying pinwheels entered the stadium and to the sweet sounds of famous Brazilian entertainer Ivete Sangalo, the pyre was extinguished from a poetic wind generated from the pinwheels.

Whilst the Games are now over, the celebrations for the Australians continue and Tokyo is just four years away.