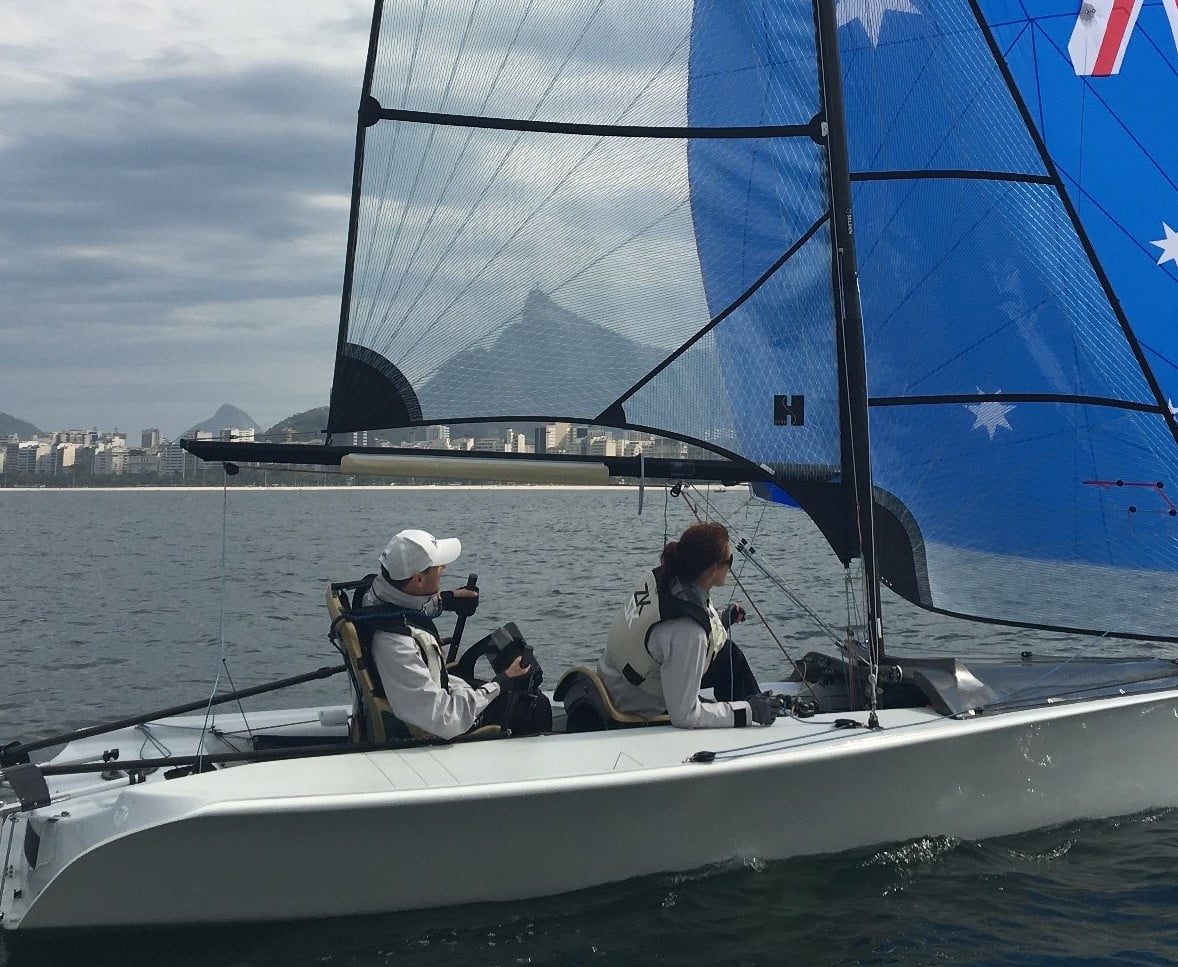 They have a brand new boat at Australian headquarters at Rio’s Marina da Gloria, but “yin and yang” duo Dan Fitzgibbon and Liesl Tesch have reverted to Fitzgibbon’s trusty six-year old SKUD18 to power their quest for gold at the Rio Paralympics.

Fitzgibbon and Tesch had won every regatta since the London Games – in which they were the Australian sailing team’s sole medallists – but after being upstaged by the pair from Poland at the World Championship in The Netherlands earlier this year, Fitzgibbon requested his old boat be shipped to Rio.

It leaves Fitzgibbon and Tesch with no excuses once competition starts on Monday (Tuesday morning AEST).

“Dan used the new boat for the worlds in Holland, but the two worlds before that, in 2014 in Nova Scotia and 2015 in Melbourne, he used the older boat and in Melbourne he was winning by two and a half minutes, which is unheard of.” sailing Team Leader Mark Robinson said.

“So they’ve got some new sails on the old boat and they’re ready to go.”

Fitzgibbon, a champion sailor before and after an accident at age 21 left him with quadriplegia, and Tesch, a former wheelchair basketball gold medallist – head Australia’s six-person sailing team, which will compete in three boat classes, the SONAR, the SKUD18 and the 2.4mR. They are an eclectic bunch, featuring experienced campaigners Russell Boaden, Jonathan Harris and Colin Harrison in the three-person SONAR and Matt Bugg, who will take on the world in the single-person keelboat 2.4mR.

The team will be looking to make a lasting mark on Para-sailing, which has been cut from the program for the Tokyo 2020 Games.

“The Olympic team was so successful in London and our team members saw that and have carried it into their preparation for Rio,” team leader Mark Robinson said.

“They all want to get onto the podium this time after we won the one gold in London. Our international federation is working on getting sailing back on the program for 2024 but, for some of these guys, this might be it for them. Another motivation is for us to do well here so we keep the younger generation coming through Paralympic sailing and help us hold on until we’re back in the Games.”

Each crew is a genuine chance of winning, including the SONAR trio.

“Having the sort of experience we get with those boys is really good for us,” Robinson said.

“They have their idiosyncrasies, as you can imagine, but they’re quite stable. It’s a good dynamic.”

Harrison, who had his arm amputated due to cancer, and Boaden, who suffered nerve damage in an arm after a motorcycle accident, sailed in Beijing together with a different partner. Boaden sat out London before re-joining the program. As a trio including Harris – who acquired his impairment in a chemical explosion – they’ve been steadily improving in recent years, using a new boat, some new equipment and a different racing style, according to Robinson.

While the SKUD18 team holds the advantage in age, solo racer Bugg can match them for enthusiasm. After he broke his back in a snowboarding accident in his early twenties, Bugg, from Tasmania, entered the Para-sailing program in 2010, finished in the top 10 in London and in the past two years has made it onto the podium at each regatta.

“He’s got the hardest fleet, the most depth of competition. It will be tough,” Robinson said. “But he’s another one who’s been working very hard and constantly improving, so anything’s possible.

“We’re looking pretty good. Dan and Liesl have won every regatta except one in this quad, which was when Dan decided to go back to the boat in which they won the gold medal in London.

“They’ve got a different dynamic, like yin and yang. Dan’s the cool, calm and collected one and Liesl’s the opposite. It’s good because they keep each other in check.

“It will be another tough challenge but they’ve got all the gear and the prep that they need to win.”