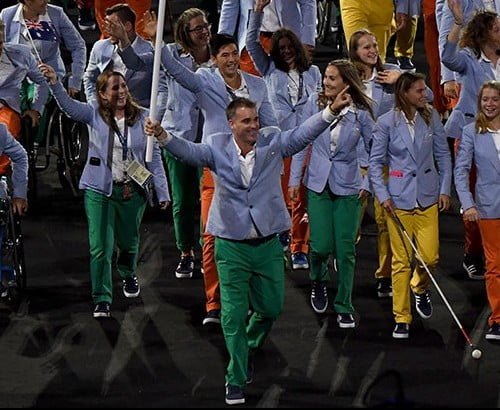 Fotheringham back-flipped through a hoop for his part. And Silva was the last Torch Relay carrier, who was faced with a flight of stairs to get to the Paralympic cauldron. He waited thoughtfully as the steps turned into a zig-zag ramp so he could reach the top.

Both eye-catching moments were book-ended with fireworks as the Games of the 15th Paralympiad were unveiled in Rio de Janeiro.

Australia was the 11th  nation of 160 in Rio to parade, cutting quite a picture in their pale blue blazers and ochre, green, or gold pants.

“What an amazing experience… so proud to represent Australia as Flag Bearer,” Ness said later. “Words cannot do it justice.”

Australia’s Governor-General Sir Peter Cosgrove and Lady Cosgrove were in the stands alongside dignitaries, led by International Paralympic Committee (IPC) President Sir Philip Craven, to welcome the nation’s elite athletes with a disability.

As each country emerged, the nation’s name was shaped in a jigsaw piece. These were then flipped over to show athlete photos from that country. They were placed on the stadium floor to create a giant pulsating heart.

“Everybody has a heart and Brazilians’ hearts never gives up,”  said  Carlos Arthur Nuzman, the Rio Organising Committee president.

Sir Philip told everyone to enjoy the next 11 days as it could change their lives.

“You will witness how Paralympic sport has the ability to inspire an individual, and the outstanding capacity to transform communities, countries and continents,” he said.

“In a country which has faced major challenges of late, Paralympians will switch your focus from perceived limitations, to a world full of possibility and endless opportunity. They will surprise you, inspire and excite you, but most of all they will change you.

“Proud Paralympians, you are role models for what the world wants to see in today’s sporting heroes. You see obstacles as opportunities, you fight for your rights and here in Rio you have a unique opportunity to make for a more equitable world. Your values tell people what you stand for and most importantly who you are.”

Right now 4,350 of the world’s best athletes with a disability are here to compete in 22 sports until the Closing Ceremony on Sunday, September 18.