No joy for Aussies at Lagoa Stadium 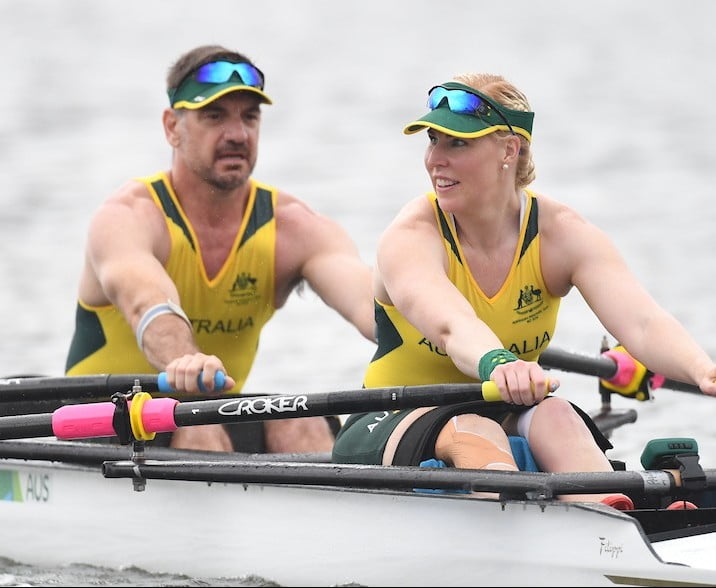 A devastated Kathryn Ross and Gavin Bellis have just missed out on making the A-final in the TA mixed double sculls at the Rio 2016 Paralympics rowing regatta.

The pair has won the last three world championships, and came to Rio as the gold medal favourite.

After falling short of automatic qualification for the final in the heats, Ross and Bellis got a second chance in the repechages, where the top two in each race would progress.

The Netherlands led from start to finish, leaving it to Australia and Poland to fight for second spot in an absorbing duel.

There was nothing between the two crews throughout the majority of the race, until Poland produced a late surge to snatch a berth in the medal race, finishing 1.32 seconds ahead of the Aussies.

Bellis said it was “gut-wrenching” to go from world champions to a B-final, with both rowers clearly shattered afterwards.

But Ross was keen to pay tribute to everyone who’s supported them since London, in particular Bellis.

“He is one amazing man who has the odds stacked up against him that he has tackled every day with passion and determination,” she said, referring to his rare degenerative disease called spinocerebellar ataxia.

“To be here with him and share this wonderful moment with him will forever be etched in my heart and in the sport of para rowing. He is a true champion regardless of results here and I am so proud to be a part of this journey with him.”

The Paralympic debutants were hanging onto second place behind Canada heading into the final 250 metres, but South Africa reeled the exhausted Australians in, to take the last spot in the final.

“I was screaming from maybe 20 strokes into it, my body was screaming, just had to keep driving,” said Ingram.

Ingram also praised his teammates, who only came together as a crew weeks before the Paralympic qualification regatta in April.

“I’m so proud of everyone here,” he said.

“We’ve been training from opposite sides of the country, we’ve had all sorts of things along the way, some pretty good injuries in the boat, re-shuffling the crew, we’ve had to fight for it the whole way.”

All three Australian crews will race on Sunday, with Erik Horrie the only medal contender in the A-final of the AS men’s single sculls.