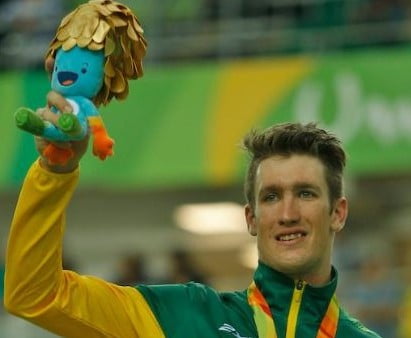 Cyclist David Nicholas vowed to improve on his fourth place on the track in Rio and he did that in style tonight with a dominant performance to win gold in the C3 3000 meter pursuit.

In qualifying the 24 year old slashed almost three seconds of the Paralympic Games record with a personal best time of 3:32.336 to put him into a gold medal match race against 2016 World Champion Joseph Berenyi.

“He got me by two tenths of a second in Italy at the the Worlds so I wanted to get him even more,” said Nicholas who works as an IT Support Officer in the northern Queensland town of Proserpine. “I didn’t want to be second to him again so I was super motivated for the final and I knew it was going to be a battle between us.”

Nicholas was quick out of the gate in the final but Berenyi responded and was seven tenths of a second up on the Australian after one kilometre. At the two kilometre mark the American still held a half second lead but Nicholas’ coach Nick Formosa knew what his charge could do and with three laps to go called on him to deliver.

“In the back of my mind I hoped I had a bit left in the tank for the last kilometre or so,” said Nicholas. “So when the call came to lift over the last few laps I tried to empty the tank and hoped it was enough to get him.”

It proved to be more than enough as Nicholas reeled in his rival to claim the Paralympic crown by a winning margin of almost a second. Irishman Eoghan Clifford claimed the bronze medal.

“I have worked very hard since London with every aspect of my training so I was hoping to improve on that but I never thought it would be a gold medal and a Paralympic Record,” said Nicholas.  “I am just speechless.

“My favourite memory of today is riding around the velodrome with the Australian flag,” he said.

There were tears as he dismounted his bike and embraced his coach.

“The relationship between Nick and myself is special and he is probably like no other coach because he is a mate and he has been with me every step of the way,” said Nicholas.  “Early last year when I had pneumonia and was in ICU in Mackay he came up to visit me from Brisbane and that to me was one of many special moments I have had with him and today is one more!

“I also want to thank everyone that supports and helps me in any way.”

Nicholas will be back on the track on Sunday in the team sprint event with compatriots Sue Powell and Alistair Donohoe before he turns his attention to the road.

“I won the gold medal in the road time trial in London so I will be really trying for that one too,” said Nicholas.  “The win today does lessen the pressure for now, but by next week I will probably feel the pressure again but I know I just have to have fun.”