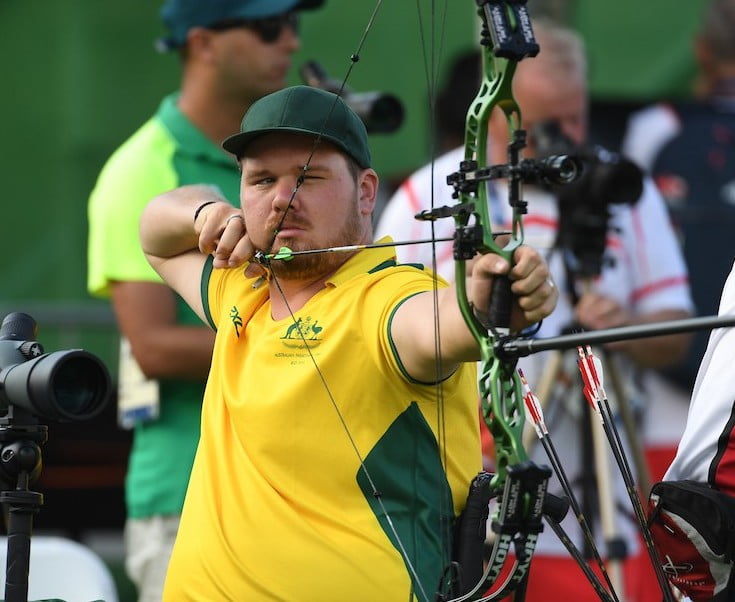 Five matches in just one day, but the end result for an exhausted Jonathon Milne was Australia’s first archery medal in over three decades.

Even before 30-year-old Milne fired his bow he was making history as the Australian Paralympic Committee (APC) had not had an archer qualify since 2004 in Athens.

The wait for a medallist was even longer – back in 1984 or two years before Milne was even born.

“It’s been a lot of hard work but when it’s a passion and something you enjoy, you don’t mind shooting off a couple of hundred arrows a day, and giving up the hours to train,” Milne said, after he beat China’s Al Xinliang 145-142.

“It was an interesting experience. I was hoping the wind would stick around because I seemed to be shooting better in the wind. But I held my nerve and executed a few good shots and that opened the door.”

His fourth match, the semi-final, was his only loss on the day but it was to eventual gold medallist Andre Shelby (USA). And it was by one arrow 139-138.

The archery is being held at the Sambodromo. It is the  venue where they hold all-night samba dance parties during Rio’s ‘Carnaval’ each February. And Milne must have felt like shaking the maracas himself.

He is relatively new to the sport and young. At his debut world championships in Donaueschingen, Germany,  last year he lost to Briton John Stubbs for the bronze medal.

Yesterday he beat Stubbs quite convincingly 139-129 in the round of 16 match.

“So it was sweet revenge of a sort. We’re even now,” Milne said.

The air was humid but relatively still for the morning matches in the 32-field draw. But the wind picked up significantly in the mid-afternoon when he beat Turkey’s Bulent Korkmaz in the quarter-finals.

Above the targets there is a wind sock and some flags. They catch the breeze and give a good indication of its strength but Milne doesn’t need them.

“I’ve got quite a long draw length and I’m right near the 60lb (27.2kg) limit, I get a lot of arrow speed out of my bow. I run a very heavy arrow so I don’t need to aim off because my arrow doesn’t drift, it goes straight.”

That he did…. He had the medal to prove it.