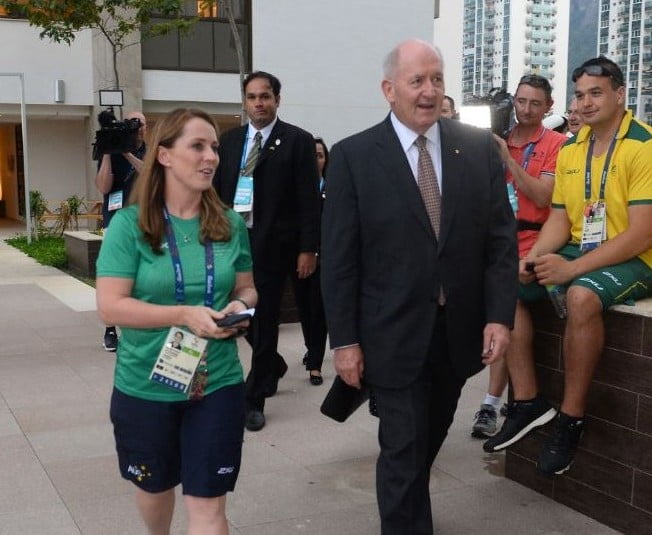 The Governor General of Australia, His Excellency Sir Peter Cosgrove, visited Australia’s Paralympians in the Rio Athletes Village today on the eve of the Rio 2016 Paralympic Games.

His Excellency and Lady Cosgrove were able to renew acquaintances quite quickly with some of the athletes as he had farewelled a group of them in Sydney last Friday.

“It is an immense privilege to welcome you to our ‘home’,” McLoughlin said. “Thank you for coming so far to cheer us on.”

The Governor-General will attend tomorrow night’s Opening Ceremony, and has a full day planned for the first day of competition on Thursday visiting shooting, swimming, cycling, table tennis and the men’s wheelchair basketball team’s game against the Netherlands.

“There’s a reason that I’ve come halfway around the world to see you because you’ve brought your brilliance, your effort and your determination to overcome anything and compete for Australia,” His Excellency said.

“And I know it’s been hours, days, weeks, months, years of effort to be here.

“I’m a professional admirer these days and there’s a lot to admire in our nation. But right at the moment, I’m admiring you,” he said to the 177 athletes, who will compete in 16 of the 22 sports at the Rio Games (September 7-18).

“I wouldn’t have missed this moment to meet you, talk to you and share some tucker with you.”

His Excellency and Lady Cosgrove joined a group of athletes in the Village dining hall after speaking to many of them outside Australian Team HQ, including 74-year-old South Australian shooter, Libby Kosmala. She has been to 12 Paralympic Games – the first as a staff member at the 1968 Tel Aviv Games and then as an athlete from 1972 onwards – making Rio her 13th. She also has 13 medals from her previous Games competitions.

The Governor General also chatted with Sydney cyclist Amanda Reid – one of the two indigenous athletes on the Australian team – and flag bearer Western Australia’s Brad Ness, who will lead his teammates out into Macarana Stadium on Wednesday night.