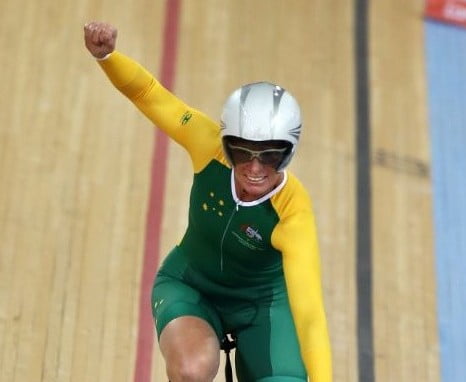 Two of Australia’s reigning Paralympic Champions will be in action on Day 1 of track cycling competition at the 2016 Rio Paralympic Games.

Sue Powell won the gold medal in the C4 3km individual pursuit while Kieran Modra, piloted in Rio by David Edwards, hopes to defend his crown in the B3 4km pursuit.

Also lining up in the C4 event is London Games bronze medallist Alex Lisney while  2014 World Champion Matt Formston and pilot Nick Yallouris will join Modra in the tandem pursuit.

Simone Kennedy, a silver medallist in London, is contesting the combined C1, 2, 3 pursuit over 3000 meters.

Cycling Head Coach Peter Day says the team has acclimatised well after escaping the Australian winter to prepare at a camp in Italy before flying into Brazil a week ago.

“We knew there would be a settling in period and we thought the first five days would be part of that,” said Day. “We’re on the 7th day now and the form seems to be coming through and everyone has settled in to training and the Village.

“From a training and preparation perspective you can’t just reproduce what you did before so we’ve had to do some things differently (than in London) because there is a performance curve and everyone is getting better,” said Day. “In Para-cycling the increments (of improvement) are very significant.

“But if we can get some decent qualification times down in the morning then we’ll be in the medal hunt tomorrow afternoon,” said Day.

Modra, 44, has raced at eight Games in three different disciplines while Powell, 49, has been claiming international results since 2009 and both know what to expect.

“The thing we can count on with the ones who have been around before is that if they can reproduce what they’ve done in the past they should be in the medals and posting good performances,” said Day. “But it doesn’t mean they will necessarily win as some new riders from other countries have accelerated ahead of them.

Australian Cyclists in action on day one (local time)