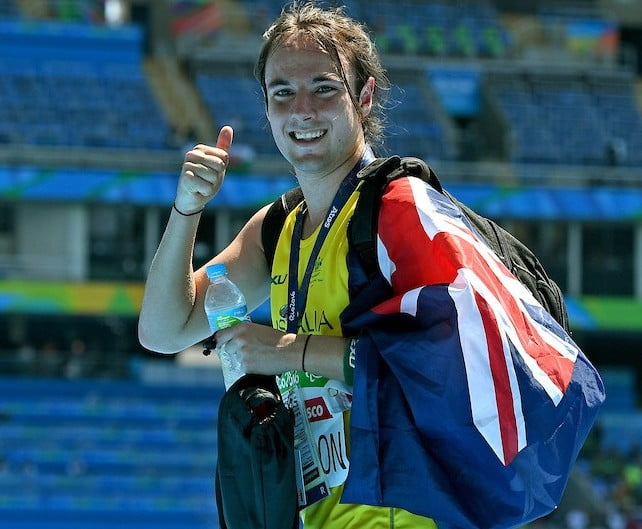 It was an extra large bowl of granola that Adelaide’s Brayden Davidson consumed today before leaping to a new Paralympic Games record and the athletics’ team’s first gold medal in Rio.

With a personal best of 5.51 metres before he arrived in Rio, Davidson let go a 5.62m jump in the first round, prompting the questions of what he had for breakfast.

“That first jump I just jumped out of my skin. I’ve never got near that distance ever before,” the 18-year-old said.

“I’m excited for London (world titles) next year and excited for Tokyo (2020 Paralympics).”

Alongside Rheed McCracken’s silver in the men’s 100m T34 final for wheelchair racers, Australia moved swiftly up the athletics medal tally from 31st to 21st with 1 gold, 3 silver, and 7 bronze.

Davidson’s  jump beat the 5.23m Ukraine’s Roman Pavlik registered to take gold at the 2012 Paralympics. He finished with bronze yesterday.

In between was Brazil’s hope Rodrigo Parreira da Silva, who also jumped 5.62 for his second round. Then it became a game of trading places between the Australian and Brazilian as each moved in and out of the gold medal position.

Finally it came down to the second best leap to secure gold. Da Silva had a 5.55m in his third round, but then Davidson pulled out a 5.57 in the fourth.

“So basically it was 2cm that got my medal,” he said. “It’s just excitement after excitement at these Games. You just never know what can happen.

“This is my only event so I came in really focused on the long jump. I could have done other events but I made my jumping the focus throughout.

“So getting out here, seeing the crowd, and jumping after the Brazilian as well was just incredible. Hearing the roar was amazing and even though it was for him, I fed off that. And the fact we were going in and out of the lead together was also amazing.”

Davidson received a rousing reception back in the Athletes Village as his teammates, friends and coaches celebrated his success with him. But he was thinking of his late grandparents, who never stopped encouraging him.

“Later tonight when all the excitement dies down I’ll compose myself and have a think about what I’ve done. I’ll look up to Nanna and Grandad and tell them I did it.”

McCracken also enjoyed some personal satisfaction – winning the 100m silver in the 100m as he had done in the same event four years ago in London when he was just 15 years old.

Now 19 years, and with two world championships under his belt since the 2012 Games, he is a more experienced racer these days.

“I’m bloody stoked with it to be honest with you,” McCracken said, after he kept right on the front wheel of gold medallist Walid Ktila, who clocked 15.14 seconds for a new Paralympic record. McCracken was also under the old mark with a time of 15.34.

“I was just happy to be up in the medal contention after a pretty hard past 12 months,” he said referring to the Doha world titles in October last year where he was out of the placings in four events.

“But my coach Andrew Dawes has got me firing. I’m a little bit lost for words as I’m just so pleased I’m back on the podium at a Paralympics.”

In the men’s 100m T38 heats, Evan O’Hanlon cruised through easily to tomorrow (Tuesday) finals. He is aiming for a rare accomplishment of gold in the same event at here consecutive Games, after his wins in Beijing and London.

In other results, the Australian Paralympic team’s youngest member Tamsyn Colley, who was selected at 13 years of age and turned 14 last Saturday in Rio, finished 6th in her 200m T36 heats. She was 11th overall and did not qualify for the final.

Dawes is 5th fastest for the final with de Rozario 9th in the 10-woman field. Dual bronze medallist already in Rio, Ballard failed to qualify after finishing 7th in her heat.

Lappin missed the final to add to his disappointment of missing the 400m earlier.

Fearnley finished fourth in his heat and only the top three automatically qualified. But the heat was so fast, he snuck into the final as the next fastest time.

“Pretty lucky,” Fearnley said. “I sat out wide for a long time and tried to set the pace reasonably quick. So I’ll take those gifts.

“I feel for Jake. It sucks not to get through to the final. But he’s a good kid with a big future in front of him.”