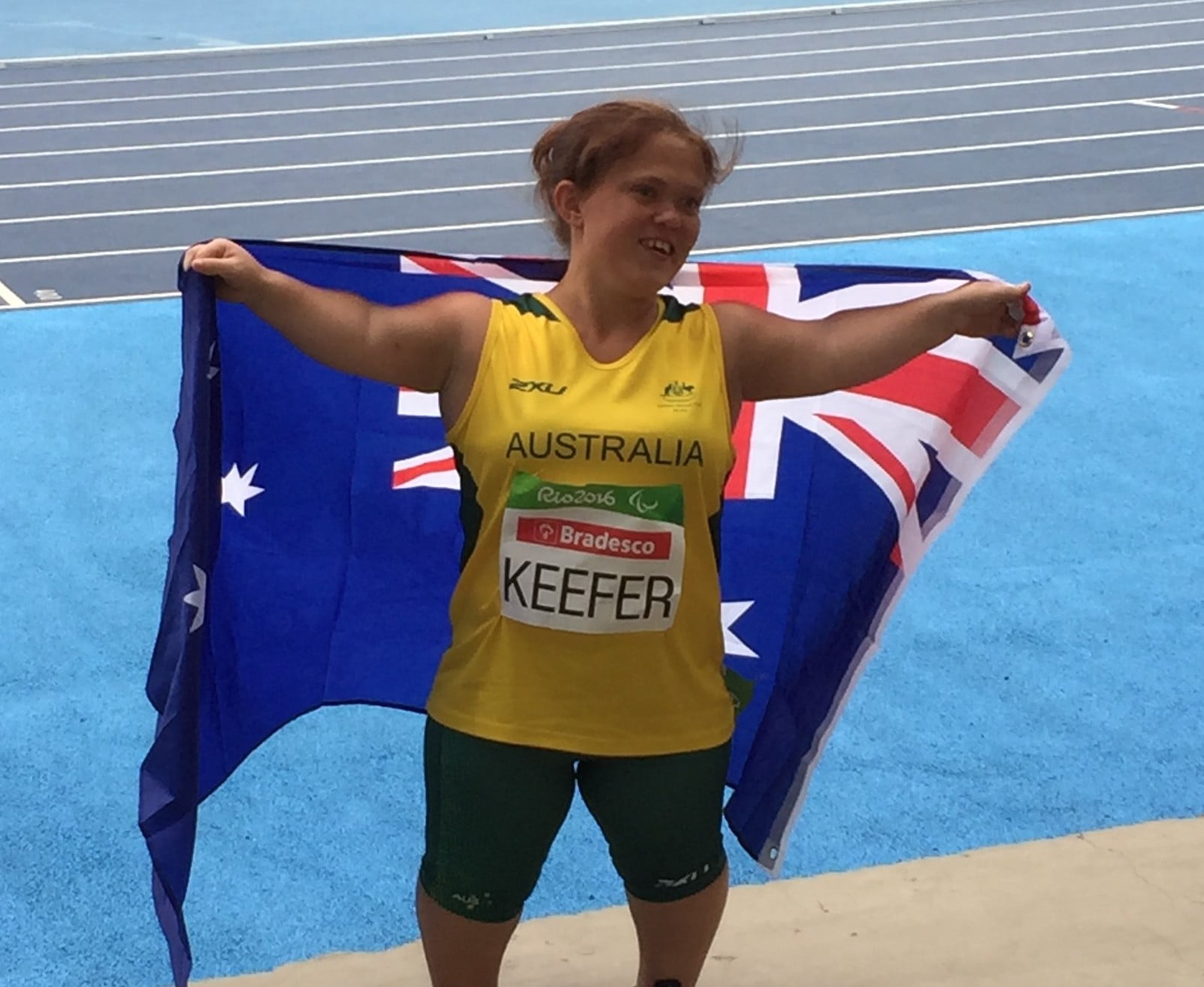 “It means the world to me – it’s hard to describe. I can now say I’m a Paralympic medallist.”

She wasn’t alone in that kind of milestone. Vision-impaired sprinter Chad Perris was a fraction slow off the blocks but took it to the rest of the 100m T13 field and got himself on the podium for a bronze medal at his first Games.

“It was an awesome race. I was nervous behind the blocks but as soon as he said ‘On your marks’ you know what you have to do and the nerves go away,” Perris said taking bronze behind Ireland’s Jason Smyth and Namibia’s Johannes Nambala.

“It was about executing my race which I’ve been working on the last three years.

“It all paid off with a massive PB (personal best time) and a bronze medal.”

And he was able to share a piece of history with Smyth, who collected the T13 gold for a third time in a row after victories in Beijing and London.

“I wanted to get over 8 metres and I did that. A bronze medal I thought was a little out of reach, but surprise, surprise I’ve got one in my hand – a Paralympic medal at my first Paralympics.

“Let’s see what I can do in four years time.”

“The whole experience was absolutely fantastic regardless. It was an incredible to represent my country,” Walsh said, also a debutant at the 2016 Paralympics.

“It wasn’t the greatest jump I’ve done but I couldn’t be more proud. This makes me more eager to improve and be able to come back and jump bigger and better at Tokyo.”

It was undeniably `debutants day’ on Day 2 with a fourth final featuring a first-time Australian competitor in sprinter Ella Pardy 6th in the women’s T38 100m cerebral palsy class.

“I felt fine before the race. I didn’t get many nerves,” she said.

“It’s been a great experience. I want to do it all again.”

Perris and Keefer’s medals take the Australians’ total to four bronze in track and field.

Team co-captain Kurt Fearnley would like to add to the total in Sunday morning’s 5000m T54 wheelchair final, after winning his race in Friday night’s heats.

Fearnley’s heat was a lot slower than the first won by Switzerland’s Marcel Hug.

“Time is irrelevant,” the 35-year-old five-time Paralympian said, who won the 5000m gold in Athens.

“Four laps in and I was sitting wide to see if anyone wanted to pick up the pace. It was pretty tactical there for a bit.”

But then Fearnley burst down the straight and in the final 20 metres overhauling Thailand’s Rawat Tana.

“I was thinking ‘Do I let him have it?’. Dawsie (coach Andrew Dawes) would have ripped me anyway as he doesn’t like not pushing through to the finish.”

Between now and Sunday’s final he will enjoy a little family time with young son Harry and wife Sheridan, who have made the trip to see Fearnley compete in his last Paralympics.

He says he feel his racing level is right where he wants it to be.

“I’m into it… give me a sniff with a 100 metres to go and I’m there. I feel ready, aggressive, determined.”