Alcott and Davidson breeze into semis 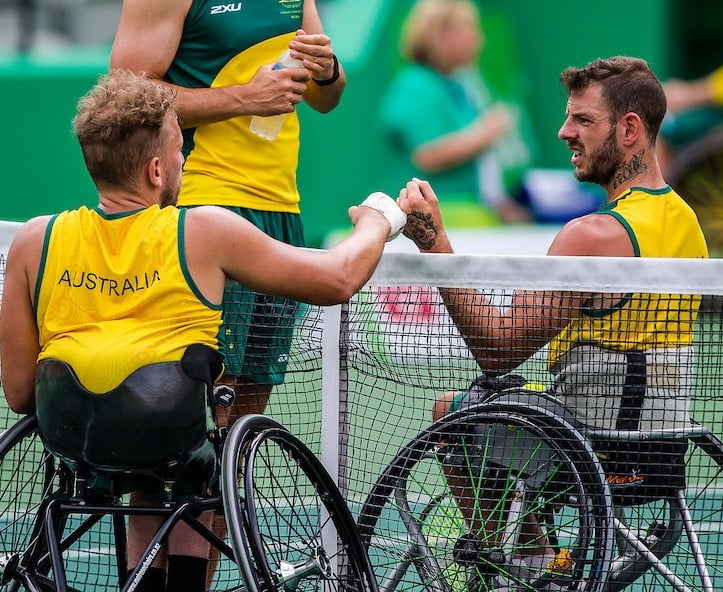 As off-key, but passionate strains of Waltzing Matilda and I Still Call Australia Home echoed throughout court 9 at the Rio Olympic Tennis centre, Dylan Alcott and Heath Davidson shone for Australia.

Both played singles earlier in the day, but backed up to face Japan’s Shota Kawano and Mitsuteru Moroishi in the quad doubles quarter-finals.

And buoyed by the support of family and friends in the stands, they steamrolled through the first set winning 6-1 in 30 minutes.

Alcott took the reigns on court, booming instructions to his less experienced partner, who was happy to oblige.

“He’s the boss out there, he’s number one in the world, I follow his lead, and that works,” Davidson said.

The duo made a good start to the second set taking a 5-2 lead, but the Japanese team refused to go away, and won the next two games.

The reigning World Team Cup champions snapped back to their best, to close it out 6-1, 6-4, as the good friends made their way into the semi-finals.

“I love playing with him,” said Davidson.

“It’s just like having a hit on a Saturday afternoon with a mate, but just a bit different because it’s at the Paralympics.”

A place in the gold medal match will be up for grabs when they face Great Britain’s Andy Lapthorne and Jamie Burdekin next.

Ben Weekes and Adam Kellerman weren’t as fortunate in their opening round doubles match against Poland’s Kamil Fabisiak and Tadeusz Kruszelnicki.

The Polish team prevailed 7-5 in the first set, and seemed headed towards victory when they went 3-0 up in the second.

The Sydneysiders won six straight games to force a decider, but their charge was halted, as Poland won 7-5, 6-3, 6-3, in nearly three hours.

“We did fight really hard, I felt like we left it all on the court,” said Kellerman.

“I did everything I could out there. I’m disappointed with the loss obviously but there were definitely some positives in there.”

Kellerman will play his opening round singles match against Japan’s Satoshi Saida on day four of competition, while Weekes will face Sweden’s Stefan Olsson in the second round.